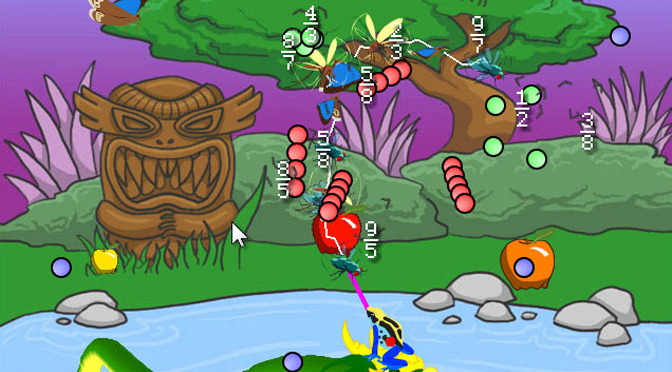 So I ran into a fun browser game this week that evidently has a bit of a following on the internet. That game is Frog Fractions, and it’s much weirder than you could ever imagine.

Frog Fractions looks like a game all about learning at first. Players sit on a lily pad and eat bugs with their tongues to stop them from collecting fruits. Instead, the frog collects them as they fall off of trees and uses them as currency. The bugs eaten give fractions of scores, which add up in the top, left corner of the screen.

The currency is used to buy upgrades for the frog. This includes upgrading the lily pad to a turtle and unlocking a homing ability, as well as many others. However, there reaches a point in the game where everything begins to change.

After a few upgrades the player will find themselves on a dragon while riding through space. They’ll have to dodge shots from the bugs and navigate asteroid fields until they reach Bug Mars, the home world of the enemy bugs. This is where things get really weird, but I don’t want to spoil it all. What I will say though is that the game will have players answering quiz questions, navigating a ship in a text-based adventure and enjoying some simple simulators.

The story of Frog Fractions is all over the place, but it works really well. Anyone going into this game expecting something serious will quickly be won over by its goofy charm and ridiculous scenarios. It’s great fun that doesn’t last too long. I think I spent about an hour with the game before finishing it and that was with getting a little stuck during the text-based section of the adventure.

The graphics in Frog Fractions are pretty underwhelming. However, it’s obvious that this is the feel that the game is going for. It fits into that whole idea that the game is much more than it seems. Players that don’t give the game enough time may miss out on what it is due to this, but it’s really worth it for those that give it more than a passing glance.

The audio in the game is similar to the visuals. There are certain parts that are obviously bad for the sake of being so. As with all the other elements, this helps the game’s overall feel. The music in the game is actually better, in terms of quality, than anything else in the game. Enough so that there is a sound menu at the end and I easily picked out a couple of my favorite songs to listen to after finishing the game.

Overall, Frog Fractions is a really good game that may fool many with its simplistic appearance. If gamer’s are willing to give it the extra time, they’ll find a crazy adventure that will pull them in and continually surprise them. Even when they think it’s over, there’s still more to this game.