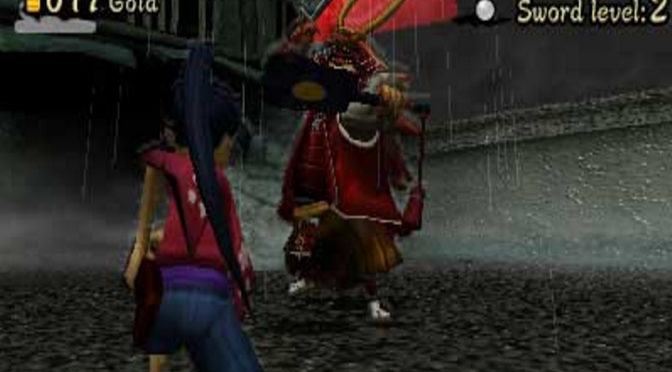 Sakura Samurai: Art of the Sword

Alright. So this week was a little different for me. I was out of the house a lot and then I was sick for a couple of days. During this time, I turned to my New 3DS for entertainment. Surprisingly enough, I don’t play many games on the go with my New 3DS. It basically exists as a Monster Hunter console so I can play with my wife and friends. However, I ended up checking out a Nintendo eShop game called Sakura Samurai: Art of the Sword.

I grabbed Sakura Samurai as one of my final rewards from Club Nintendo before it went under. It’s been sitting on my New 3DS ever since and I never knew anything about it. When I finally booted it up just this last week, I discovered an amazing gem hiding on my portable game console.

Sakura Samurai puts players in the role of a nameless samurai warrior. He is tasked by a kappa (basically, a Japanese turtle demon) with saving Princess Cherry Blossom, who has been kidnapped. Without Pricess Cherry Blossom free, the land is starting to decay and sakura tress around Japan are disappearing.

Our hero’s journey carries him across three different lands. The player doesn’t actually run around in an open world, and instead chooses to move to different points on the map. Most of these points contain enemies for the player to fight. Defeating the enemies at that point will unlock new paths to other points. Each cleared area also awards the player with a sakura petal. Collect two of these to get an additional heart of health.

Combat in Sakura Samurai is a bit different than what the player may be expecting. Instead of running in with a flurry of blows, players will have to be quick and precise to get anywhere in this game.

Players have the ability to dash in all four directions. This is used to dodge attacks and close the distance between the samurai and an enemy. Sakura Samurai is best played by dodging enemy attacks and then launching a counterattack. A single sword strike can be made after a dodge. However, if the player waits until the last minute to dodge, then two sword strikes can be made. This also nets them a Precision Point, which we’ll get to later.

As the player dodges and attacks enemies in battle, they build up their special gauge. Once full, they can perform a special attack that hits all enemies in a certain area. It’s great for clearing a room of guys and can also be used on bosses.

Holding the shoulder buttons will also let players block attacks in Sakura Samurai. Honestly, I never really used this feature. It results in the blade dulling, which means that the player will have to sharpen it. This can be done on the field with whetstones, or at the smithy in one of the three towns in the game.

Towns in Sakura Samurai act as a place for players to prepare before continuing with their journeys. Those Precision Points I mentioned earlier can be sold for gold and that can be used for several things. One thing gold is good for is buying items. This includes throwing kunai, whetstones, sakura rice cakes, frogs and a couple of other special items. The kunai are good for attacking at a distance, the rice cakes heal and frogs with throw an enemy off guard.

Players can also use their hard-earned gold to forge their sword into a stronger one. This can be done once at each village. There are also minigames that can be played. Players can try to double their money, or collect stamps. Collecting stamps will reward the player with more items once certain milestones are reached. There are also additional special attacks that can be unlocked by collecting large amounts of stamps.

Sakura Samurai isn’t a very long game, but it will keep players entertained for two or three hours. Those looking for an extra challenge can also play through the game on expert mode after beating it for the first time. This mode doubles enemy damage, removes sakura petals from the map and increases the price of many items. Players also can’t purchase sakura rice cakes either, but this isn’t much of a loss as many enemies do enough damage to kill the player in a single strike.

Playing through expert mode is a treat, but it doesn’t include any additional awards for the player. This is a bit of a bummer after putting in all that practice to master the dodge and counterattack system. There are also additional modes that have players challenging large groups of enemies in what is basically a gauntlet. This mode includes a clock for players that are all about shaving a few seconds off their best time.

The graphics in Sakura Samurai have a very distinct style to them. The characters and environments are all a bit blocky, but not so much that it’s comparable to a game like Minecraft. There’s a lot of personality to each character and the game reuses the townsfolk for each different city. Part of me thinks of this as a cheap move to save on resources, but the other part thinks that it was done to help the player build a better bond with the characters in the short time the game has.

The audio in Sakura Samurai is great. It’s got that classic Japanese music and sound effects that many players were probably first exposed to through old black and white samurai flicks (I used to love waking up on the weekends and watching these as a kid). If you missed out on those classics, then think Okami.

Sakura Samurai is a wonderful game that I’m disappointed I didn’t discover sooner. Its combat is quick, its story is short and its price is low. All of these come together to make it an almost perfect Time Waster. Seriously, go check this out if you have a 3DS or New 3DS.