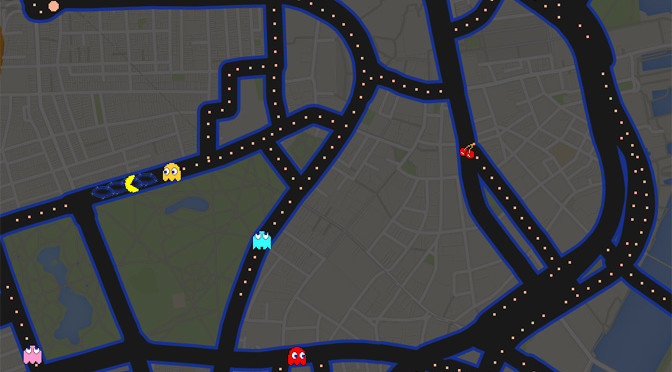 This week I’m going to be talking about an old game that recently got a new spin put on it. That game is Pac-Man.

As I’m sure all of you know, this week contained April 1st, which is better known as April Fool’s Day. Google has a habit of creating interesting games and jokes every year to celebrate the holiday. Last year it was putting users on a journey to collect Pokemon on Google Maps. This year the company decided to set up a game of Pac-Man on Google Maps.

Playing Pac-Man on Google Maps is interesting because it allows players to turn streets into levels. These new levels work just like the ones from the original game. This means players will be dodging Blinky, Pinky, Inky and Clyde as they work to eat all the pellets in each level. The random cherries also appear and power pellets that make the ghost eatable are also on each map.

One of the biggest draws of playing Pac-Man on Google Maps is being able to turn your hometown or current living area into a level. This didn’t quite work as well for me because I come from a small town (seriously, the population doesn’t even break 2,000 people). This is because the lack of streets made it so the game couldn’t even create a level. I did find a couple places to play, but it was very limited. However, I found I was able to play in the town I went to college for. It still wasn’t a big town (think Smallville from Superman), but it had enough streets to  easily play the game.

Choosing areas to play in Pac-Man on Google Maps that are heavily populated made for some really interesting levels. One of my friends specifically recommended Boston and it’s easy to see why. Other large cities also work really well. Google also released a list of hints that players can solve to find some fun and difficult areas.

The graphics and audio of Pac-Man don’t really need a description. It’s a classic game that basically everyone knows about. Google kept its look and sound and it makes for a great homage to the original.

Overall, Google gave us an awesome April Fool’s Day this year. Playing Pac-Man on city streets is a very unique idea and it works quite well. Bigger towns work better for the game, but that just makes sense. Honestly, this is fun experience. I’m not even going to score the game. It’s Pac-Man. It’s fun. Go check it out.

Just like with beta and demo reviews, Pac-Man on Google Maps will get a placeholder score of 2.5 out of 5!