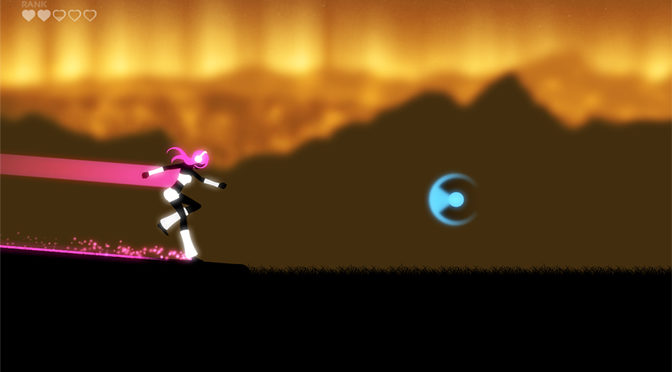 You know what really sucks? Being sick when it finally starts warming up. I caught myself a bit of the flu and it’s lasted this entire week. I still have it as I write this, but least I’ve had Melody’s Escape to keep me entertained while under the weather.

Melody’s Escape is a game that takes the rhythm genre and runner genre and fuses them together into a single experience. It requires players to hit one of eight corresponding buttons in time with a song to complete actions. This can be a bit complex and challenging at times, but it’s so worth mastering.

As with most rhythm games, Melody’s Escape comes with its own batch of songs for players to use. There are five or six and they aren’t bad. They definitely go well with the feel of the game and are great to play. However, the main draw is being able to use your own music library in the game. For me, this meant that a lot of Coheed and Cambria got played, but there were so many other songs that I wanted to play as well. I’ve already put a good bit of time into the game and I know I’ll be getting even more because of my massive music library. Not to mention I’ll replay previous songs to try and do better on them.

What’s great about Melody’s Escape is that it actually does a really good job at syncing the action up with the song. There are times where it doesn’t quite match, but the majority of the time it does its job well. It also features several difficulty levels for new and experienced players. Taking songs on at the harder levels is great and gives a better feel of the beat matching the action on screen. There’s also a calibration tool to help get the game better synced. I used it and it worked as intended.

The game really goes out of its way to make the player feel great when they play. Heavier or more upbeat parts of songs will have Melody active jet boots and fly up, under and through obstacles. These sections are great to play, but there’s one other moment that trumps them. When the middle of a song goes quiet before a sudden return to the music, the game will have the player diving off a cliff in slow motion only to hit the ground again when the first note of the next section is played. I had this happen in several of my songs and it never stopped feeling epic.

Check out the trailer for Melody’s Escape below!

Outside of this basic gameplay idea, there’s actually not a whole lot more to say about Melody’s Escape. It’s a simple concept that is very well executed. Sure, there isn’t a story mode and maybe some more variety in track appearance could’ve been used, but what’s here already offers a near-limitless playtime. With that being said, the game is supported in Steam Workshop and players can download different skin and texture mods for Melody and her environment, but this isn’t something that I would add to the game’s score.

The art style in Melody’s Escape is simple, but it works out well. Melody is a silhouette of black and white and players can choose between a few different outfits for her to wear. The area she runs through is a black silhouette, but she doesn’t blend in with it due to the color-changing background. It’ll change throughout songs depending on how intense they are. It’s a good bit of art direction that helps add to the game.

I know this is the part where I’d typically talk about the game’s audio, but there’s not really a need to with players being able to select their own music. The one thing I will say is that the sound for missing notes, which I heard often, is loud enough to be heard, but still soft enough that it doesn’t take away from the songs that are being played in the forefront.

Overall, Melody’s Escape is a wonderful game. It’s the best use of a person’s music library for gaming to date, and will likely hold that title for a long time to come. I really can’t suggest this game enough. It’s $10 on Steam and that’s easily worth it. Also, this is a prime example of the developer waiting until a game was finished and polished before bringing it out of Early Access, which is something others should learn from.