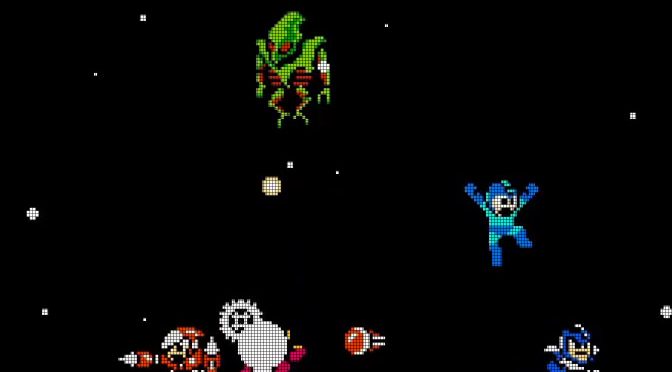 My gaming this week was with a fan game of one of my favorite series: Mega Man. I’ve looked at Mega Man fans games in the past with mostly positive results and I was hoping for the same from Mega Man Arena.

Mega Man Arena is exactly what it sounds like. The game allows up to four players players to duke it out in battles with each other while controlling characters from the Mega Man series. To be more specific, this game lets players control Mega Man and the eight Robot Masters from the second game in the Classic series.

Each of the characters in Mega Man Arena have the same moves and special abilities from the game. However, there have been some tweaks here and there. This doesn’t mean that the game is completely balanced, as some characters just feel much more powerful than others. The characters’ different moves are easy to perform with the press of a button and adding in different directional inputs. This makes it easy to just pick up and play the game.

Mega Man Arena features a wide array of levels for players to fight it out in. However, they all feel a little too cramped. The courses are all the same size as what a boss room in the Classic Mega Man games is. This works well for just two players, but quickly get way too packed with anymore than that. Adding to this is the inclusion of instant death traps in many of these levels, which just makes them feel even smaller.

I’ve also got some complaints about how these areas work. In an effort to remain true to the originals, Mega Man Arena doesn’t include collision detection between walls and bullets. This makes it so that all the walls in the game act more like obstacles than possible places of cover. It also just boils combat down to two players jumping and shooting each other while hoping to dodge the other’s attacks. I understand trying to stay faithful to the original, but this doesn’t feel right for a fighting game.

Speaking of faith, there’s something else in Mega Man Arena that feels really out of place. The game includes tips on loading screens about how to play the game. That’s all fine and dandy, but some of the tips are quotes from the Bible. Listen, I’m a practicing Christian, so I’ve got no problem with a developer showing their faith in a game. However, it feels out of place in Mega Man Arena. That’s because this isn’t all original content from the developer, but rather a fan game of an already-established series. Mega Man has never been religious before and it has these quotes just feeling shoehorned in.

Players that do tackle Mega Man Arena also have a boss battle mode that they can take advantage of. This lets them fight the various larger bosses of Mega Man 2, such as Wiley and Mecha Dragon. Players can tackle these on their own or compete with friends to take down the boss. It’s a nice little addition that adds some extra flair to the game.

The visuals in Mega Man Arena are great, because it’s all from Mega Man 2. There’s really not much more to say than that.

The audio is in the same boat as the visuals here. It’s music that fans know and love from Mega Man 2. You’re sure to enjoy it, but there’s not really anything new here. I guess the one thing I can mention is that Mega Man has a voiced line when stealing an enemy’s power. He says the phrase “Now I’ve got your power” from the old Mega Man cartoon by Ruby-Spears. This is a small touch that I personally enjoyed as someone who grew up in the 90s and watched the cartoon.

Overall, Mega Man Arena is a bit of a mess. It’s fun to jump on for just a couple of matches with friends, but nothing that really stands out to keep players coming back. It holds true to Classic Mega Man, but this doesn’t always translate well to a fighting game. At least it’s free!