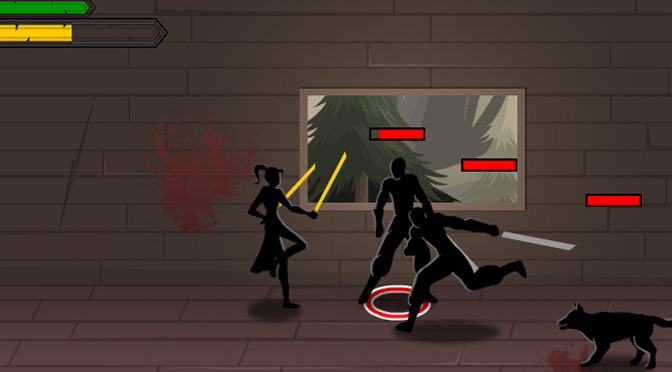 For my Time Waster this week I searched around the net until I ran into a nifty little game called Shadow Arts. It’s a hack-n-slash type of game that mixes it up with a slight feeling of turn-based gameplay.

Shadow Arts puts players in the role of Talia as she sets out to put a stop to some local bandits and track now her father’s murderer. Honestly, its a typical revenge story, but it serves the game well enough for what it is. Just don’t expect an amazing twist at the end or anything like that.

Talia has three different fighting styles at her disposal. The first is dual swords, the second is a spear and shield and the third is magic. Each of these play differently and players can switch between them when they choose during battle. The different weapon types have energy bars that refill when they aren’t being used and are depleted when the character takes an action. This adds a decent amount of strategy to what almost appears like a mindless hack-n-slash title.

The three different styles in Shadow Arts can each perform three different actions. They all have a light and heavy attack, but the last skill changes how Talia handles incoming attacks. The dual swords can dodge attacks, the spear and shield can block attacks and the magic style offers the ability to heal. Also, enemy attacks are more akin to a turn-based RPG, which gives the player a little bit of a lull during combat to plan their next move.

Players will have to switch between the different styles on the fly if they want to progress past some of the harder battles in Shadow Arts. For example, there’s a boss in the game that wields a giant hammer. This does a lot of damage and will stagger the player if they try to block it. However, it’s very easy to dodge and damage dealt can always be healed back in between attacks. Players will have to watch their energy bars to make sure they don’t use too much of their dual swords’ energy attacking that they can’t dodge. I found the best way to handle this enemy to be dodging, switching to spear and shield for attacks, and healing when necessary. It can be a bit hectic to get used to, but its very rewarding if enough practice is put in.

Shadow Arts also allows players to upgrade their different weapon types between levels in the game. This is done with gold that’s earned after every fight and it can help them reinforce the fighting style that they prefer. Still, I’d advise spreading out the upgrades in an equal enough manner that Talia isn’t overly good at just one thing.

The art style in Shadow Arts has characters showing up as black silhouettes while their weapons are flat colors. Backgrounds are normal with their own colors, shading and various other details. I just realized that this is the second week in a row I’ve played a Time Waster where the characters are silhouettes. Maybe this style is becoming more popular?

Shadow Arts contains a single track of music that loops almost the entire game. Luckily, it’s quite epic sounding and fits well with the rest of the game’s presentation. It’s also not 8-bit music, which is a refreshing break from most indie titles. The sound effects are a little choppy at times, but they aren’t going to majorly affect the player’s experience with the game.

Overall, I really enjoyed my time with Shadow Arts. It’s got a neat system that I’ve only seen a few other games do and it executes it well. It’s also got a solid presentation to draw players in with. The story is a little weak and it takes some time to get used to the combat system, but it’s a good experience if you’ve got the time to kill while at your computer.