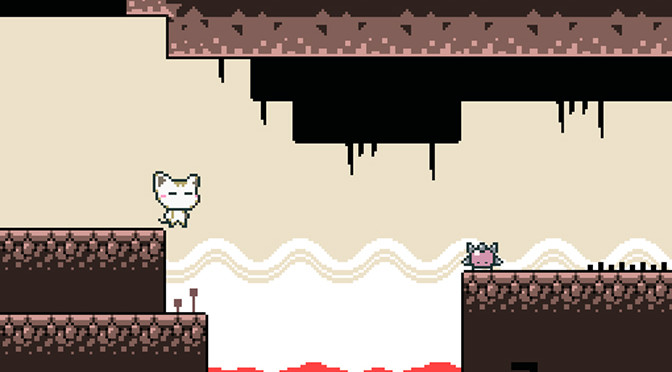 This week it was hard to get much of anything in terms of gaming done because I was too distracted by E3. I’m a Wii U owner and I’m definitely excited for almost everything Nintendo announced. Maybe this E3 will be the proof that some people needed to know that the Wii U isn’t going to fail. Either way, I’m getting off track.

This week I played a small browser-based game titled A Kitty Dream. As the name implies, the game takes place inside the dream of a kitty that then goes to sleep in its own dream to reach new dreams. Maybe I should call the game Dreamception instead?

Gameplay in A Kitty Dream is a mix of platforming and puzzle solving. Players are put in control of the dreaming kitty and not really given any direction. Instead, exploration is the key to finding new areas and beating the game.

The puzzles in A Kitty Dream involved basic block pushing, but there were a few twist here and there. Each of the blocks have to be in a dotted outline at the same time to unlock doors. However, this doesn’t mean that the blocks have to stay sitting in those lines. This means that some puzzles are solved by putting all the blocks expect for one in the right spot an then pushing the last block so that it only passes through the designated area. This took me awhile to figure out, but I got it eventually.

A Kitty Dream also features several areas where players will have to use pin-point platforming to jump and dash around enemies in order to avoid getting hit. If the player does get hit, they die and have to start over from the last save point. These areas were fairly challenging and kept the game from being loaded up with too many puzzles.

A Kitty Dream is a very short game. Depending on the player’s skill at solving puzzles and platforming, it can be beat in anywhere from a half hour to an hour. Players who want an extra challenge can look for three secrets hidden throughout the game, but it’s not necessary.

The graphics in A Kitty Dream are simple, but cute. Most of the game’s environments consist of soft colors that seem fitting for a dream. One area does mix it up with a brown background and sections of lava. I can only assume that it was meant to represent a nightmare.

The audio in A Kitty Dream is great. Most of the game is filled with soft relaxing music that is perfect for countering frustration from solving puzzles. As with the graphics, one area (the same area, actually) does stick out. This area has more upbeat music that falls in-line with its focus on precise platforming.

Overall, I really enjoyed A Kitty Dream. The game doesn’t do anything revolutionary, but its a solid puzzle/platforming game that is great to waste some time with. It also helps that the game has an enjoyable atmosphere due to the audio and graphics being in unison.

A Kitty Dream solves how to get 4 GiN Gems out of 5!