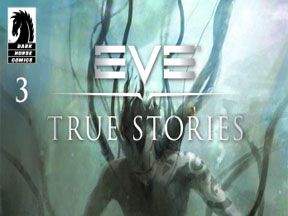 CCP Games and Dark Horse Comics are proud to announce the hardcover edition of “EVE: True Stories Thieves Among Us,” is now available for purchase.

This unique ‘living narrative,’ portrays the tale of one spy who single-handedly undermined the dominant Band of Brothers alliance —the largest alliance within the EVE Universe at the time — and brought an end to the Great War, the most significant player conflicts in the history of EVE Online® that involved thousands of players.

Penned by comic book fan favorite Daniel Way (“Wolverine: Origins,” “Deadpool”), “Thieves Among Us” is inspired by player-driven events, based on the in-game adventures of EVE Online players, as recounted on the EVE: True Stories website.

With this living sci-fi tale now complete, readers are able to enjoy all four issues of “EVE: True Stories Thieves Among Us” in a single collected hardback edition.