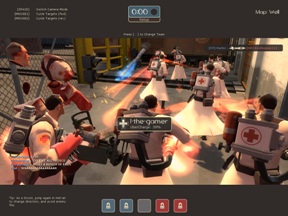 Hello again everyone! It’s been a little while since I gave you all something to waste your time on. As I’m sure you might have noticed Team Fortress 2 became free to play a couple of weeks ago, and what’s better than free entertainment, right? Exactly, so let’s sit down and take a look at one of Valve’s most popular games.

Well first thing is first, I’ve played Team Fortress 2 before, no I never bought it but I would hop on during the free weekends of play. While I can’t say I was as engrossed in the game during any of those times (which I chalk up to having a time limit to play it), I can say that I’ve found myself getting much more into it now that it’s permanently free though. This doesn’t mean I’ve become a TF2 junky, far from it in fact.

It’s a little hard to explain but I’ll give it a go.

You ever have a feeling when you play a game where you find the game to be mildly enjoyable and then for some reason you can’t bring yourself to stop playing, even though you know there are more enjoyable games out there to play? Well that’s kinda how I feel about TF2. The gameplay doesn’t bore me, but I’d much rather be spending my time playing another game, yet I find myself still playing it. It’s strange, I’m starting to believe Valve must have found a way to transfer crack through my mouse and keyboard.

More entertaining than the game itself though are the characters in the game. Now I’m sure that most of us have seen the "Meet the X" series of videos. These are what I see as the greatest part of TF2. Valve has always been a fun company, and one of the major ways they show it is through their ads. Each of the TF2 ads are designed to be funny incidents that happen to members of the TF2 cast. The great thing about it is just how many people will stand behind TF2 just because of these small videos that give us a look into the personalities of the characters. So while it isn’t really a part of the game I still wanted to give Valve some kudos for being an overall fun company.

An example of a "Meet the X" videos.

So I’ve been talking about TF2 for a short while now and I haven’t even mentioned what exactly the game is yet (truthfully I kinda forgot to mention it earlier : ) ). TF2 is a First Person Shooter where two teams (RED and BLU) compete against one another in varying game types. There are a total of 9 classes to choose from and each class has its own unique play style. For example, I find myself playing as the Engineer more often than not. I find satisfaction in creating turrets in places that will annoy my enemies beyond all belief, such as placing turret in an enemy base during a capture the flag match and then building a teleporter behind it. This is what makes TF2 fun to play though. Everyone will find one or two classes that they really enjoy and then play them all the time. I’m not saying that it’s a perfect system but it does help appeal to a wider range of players.

Graphics in TF2 are a bit goofy, but that’s okay in my book. I don’t think Valve could have reached the same level of popularity without them and the characters attitudes surely wouldn’t have fit. If there was one thing about TF2 that I would say needs to change graphically then it would be the lack of a single playable female character (if we can have a female Boomer why not a female Heavy?). I’m the kind of guy that given the choice wouldn’t play as a female character, but then again not all gamers are guys are they (nor do they all share my taste in characters)? Besides I’m sure we can all imagine the funny scenes that could occur in the "Meet the X" series if there where females included. Sure we won’t see it in TF2 but I wouldn’t be surprised if TF3 was in the works, especially since TF2 became free to play, so maybe we can see some women then.

So overall TF2 is a good way to waste your time, it’s free, it’s addicting, and the characters are extremely entertaining, there isn’t much more we can ask for in a Time Waster.

As such Team Fortress 2 earns itself 4 Time Waster Gems out of 5!