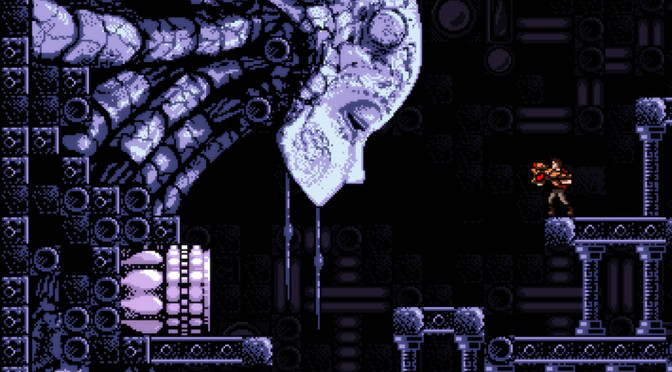 Let’s talk about Axiom Verge. If you’ve never heard of this game, I understand, but make sure you remember it after today.

Axiom Verge is a side-scrolling adventure game that falls into the Metroidvania genre. The story involves a scientist named Trace that is transported to a strange world and has to help large, female supercomputers restore themselves following attacks from an evil entity. This is likely already sounding familiar to fans of the Metroid genre and its for them that this game was made.

While I said that Axiom Verge was a Metroidvania-styled game, it’s more accurate to say that its a Metroid game more than a Castlevania game. There is a lot of exploring to do and plenty of powerups can be found to progress further in the game. This is made possible with the Axiom Disruptor, a super advanced gun that can fire a multitude of different shots that are collected by exploring the game’s world. There’s even a grappling hook shot and a drone that allows players to explore areas they couldn’t normally reach. One of my personal favorite upgrades is a lab coat that allows the player to move through walls that are only one line of blocks thick. Or maybe its the wave bean that literally lets the player hack the world and enemies. I don’t know. There are just too many options to chose from.

The gameplay in Axiom Verge is tight. The controls feel solid and not floaty at all and there is aiming in eight different directions. The game even has a button that locks the character in place so they can aim better. I think anyone whose ever played a 2D Metroid game has probably wished for this feature.

Axiom Verge is filled with loads of bosses. They start out easy enough and ramp up in difficulty in such a way that the player should be able to handle them. One thing I’ve noticed is that there’s no set weapon that just destroys any boss. Some are better than others, but tackling the beasts from a different angle can also completely change which weapons are best. Games that make players think like this seem to be few and far between anymore and it was nice to see that it can still be done.

The world of Axiom Verge is large and players that want to collect everything are going to spend a good chunk of time on that goal. There are plenty of powerups and new weapons to collect. Not all of them are a necessity, such as increased damage are larger shots, but they’re a nice reward for those players that put in the extra time and effort to find them.

The graphics in Axiom Verge go for that retro look and it fits very nicely with the overall feel of the game. There are some characters that get more detail than others, such as supercomputer Elsenova and the other floating heads she calls sisters. but then poor Trace is left looking like a jumbled mess of pixels. As least an image of his face shows up in dialog boxes to give the player an idea of his appearance.

I also want to mention that Axiom Verge’s large variety of different areas to explore all stick out in such a way that they can’t be easily confused. This design choice and the inclusion of an in-game map makes it hard for even amateur gamers jumping into this genre to get lost.

The music in Axiom Verge is very fitting for the game. All the different songs make it very apparent that this is a Sci-Fi adventure. They’re also great at setting the atmosphere for the game with many tunes that help make the player feel isolated on this strange world.

The sounds effects in the game are also spot on. Every different weapon has its own sound when fired and they match up well with the animation that goes with them. Creatures also have a variety of different sound effects that make it clear when damage is being inflicted or ignored.

If you’re like me and having been waiting for a new 2D Metroid game since Fusion was released way back in 2002, then Axiom Verge is the game for you. It’s a faithful nod to the series, but also stands on its own with a solid story that has plenty of twist and turns. Sure, it may not feature everyone’s favorite bounty hunter, but it might just make you forget about your disappointment with Other M or the upcoming Federation Force. If not, it’ll at least ease the pain.