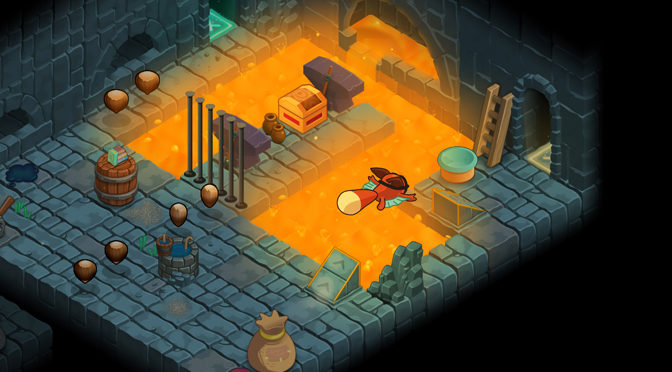 This week I’m here to tell you about a game called Red’s Kingdom. It’s a smartphone game that also has a PC release. I sat down with the PC version of the game for awhile and figured it would make a great time waster.

Red’s Kingdom is all about a squirrel named Red that has to explore the kingdom he lives in. Big surprise, right? He’s exploring it to get his Papa back from the evil king. See, this king fella stole all of Red’s nuts, as well as his Papa. He also took Red’s prized golden nut.

If you can’t already tell, Red’s Kingdom isn’t exactly sporting a deep and complex story. It’s a bit simple and definitely childish. Expect lots of mundane dialogue and the occasional joke about Red’s nuts. Either way, it’s really not the main focus on the game.

Red’s Kingdom is all about collecting nuts and exploring the world. Our friend Red can only travel by rolling into a ball and moving in straight lines. This means that every area of the world is a puzzle that the player has to solve to move forward. There are ramps, switches, goo and the other basic elements from these types of puzzle games, as well.

Honestly, I really enjoy how Red’s Kingdom is set up. I was expecting to be thrown into a near-endless amount of quick levels that tasked me with getting from one end of a room to another. And while players are placed in room-like areas to solve puzzles, they can still see the rest of the world around them and how it all connects. Heck, sometimes solving a puzzles in one room will reveal a secret in another.

The approach to gameplay in Red’s Kingdom really does make the player feel like they are exploring a world. More than once I went through an area knowing that there was more to it than what I had discovered. I also knew that the open nature of the game meant I could come back whenever to figure out what I missed. The game even includes teleporters in each area to make backtracking easier.

The actual puzzles in Red’s Kingdom are also great. The game starts out with simple puzzles, but slowly ramps up the difficulty to really get players thinking.  New elements, such as abilities for Red, also come into play over time and they help keep the game feeling fresh. There are also enemies that can be defeated along the way.

The graphics in Red’s Kingdom are solid enough. It’s a mobile game and players will notice that at certain points. Navigating the world looks normal, but the Flash-like cutscenes that reveal the story are a bit grainy. I also had some trouble with the game lagging really bad occasionally. It made it downright impossible to play. However, I found that hitting Alt+Tabbing out and coming back in would solve the problem. I don’t have a deep enough understanding of what’s going on in the code to really know why this works, but it does.

The audio in Red’s Kingdom is mostly forgettable. I can’t say I really remember much of the background music, and the squeaky gibberish from the characters was downright annoying. Though I do seem to remember the sound effects being alright. Do you think smartphone game developers don’t put much effort into the audio because they know the players are going to have it turned off most of the time? I think that’s the case for the majority of mobile games.

Overall, Red’s Kingdom is a fun way to waste some time. The puzzles are fun, it has unique world exploration and its not bad in the visual department. Is it worth the $9 price tag on Steam? Heck no! Especially not when the iOS version is only $2. Wait for a deep discount before picking this game up.

One thought on “Exploring Red’s Kingdom”