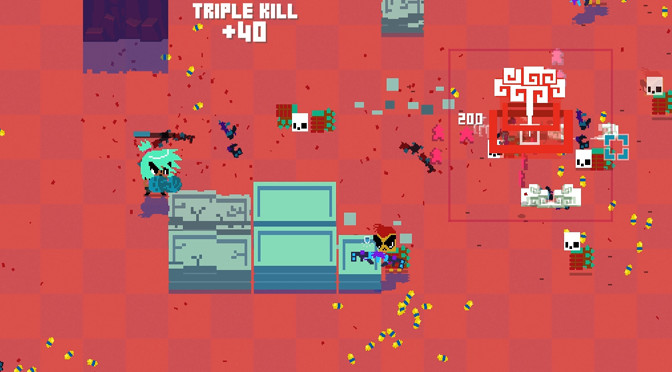 Free games are a touchy subject with me. There’s always that fear that I’m going to run into a game that has microtransactions out the wazoo. This hasn’t been much of a problem with PC games, but that’s starting to change. Luckily, there are games like Relic Hunters Zero that convince me it’s still worth checking free games out.

Relic Hunters Zero is an interesting game that can be downloaded on Steam for free. It’s a top-down shooter that puts players in the role of one of two explorers as they navigate through various levels to uncover relics.

Relic Hunters Zero likes to drop players right into the action. Okay, so there’s a quick tutorial to get players up to speed first, but after that it’s all glorious guns and explosions. Alright, it doesn’t have to be guns. One of the starting characters the game gives players uses their fists instead, and she was quickly my favorite to use. She just fit my play style more than my other choice and even remained my go to choice after unlocking additional characters, of which there are four.

The controls in Relic Hunters Zero are easy to get used to. Players move around with the ASDW keys and use their mouse to aim and shoot. Aiming is done with by holding the right mouse button and shooting is done with the left. Players can also run around and dash with the Space Bar.

Relic Hunters Zero isn’t really a game where story matters all that much. It’s really more about the action and search for relics. See, players can’t just find a relic after a mission. Instead, they can find a piece of a relic if one is present. Relic spawns are random and the pieces players find won’t always be for a relic they already have parts to.

There’s also a store in Relic Hunters Zero that players can access between certain levels that contain relics. This helps players complete relics faster and other items, such as guns and ammo, are also sold there. It’s actually a smart idea to buy guns whenever available as this unlocks them back at the player’s base. It’s nice being able to pick your favorite weapons before starting a long chain of battles to reach a new area.

(Check out my Let’s Play of Relic Hunters Zero below.)

If players find themselves really enjoying Relic Hunters Zero, but have cleared all of its levels, they still have another option to get more time out of the game. This comes in the form of an Endless Mode. It allows players to go through an unlimited number of levels until they die to see how far they can get. This type of thing has never really appealed to me, but it’s a nice addition for players to like to test their stamina.

However, Endless Mode is a lot more than just throwing levels at players. It makes it so that each level has its own unique trait. For example, some levels will have enemies throw grenades more often than normal, another could have medium ammo be more effective and so forth. There’s also shops between levels to upgrade weapons, remove challenges and more. It actually adds quite a bit to the game.

Relic Hunters Zero also features a co-op mode. Unfortunately, I didn’t get a chance to check this out. So consider this more of a heads-up than anything else. I should also probably mention that the game is open source, which means anyone can develop content for it.

Relic Hunters Zero features bright and colorful graphics that really pop and catch the player’s eye. It’s not so bright as to be bothersome, but it really helps the game stick out. Everything kind of has this neon 90’s feel. The graphics are all pixelated, which isn’t really a downside.

One of the best features of Relic Hunters Zero is the music. It’s all so dang catchy that it’s hard not to enjoy it. Sure, there are only a few tracks in the game, but there aren’t any bad ones, and that’s a major plus. It also has solid sound effects that help add to the action.

Overall, I loved my time with Relic Hunters Zero. The game is a lot of fun and its free. There aren’t microtransactions and the gameplay is really solid. Everything else that this game brings to the table is also really good. The only real negative that I can think of is the lack of meaningful story, but it’s obvious that this was done intentionally by the developers.