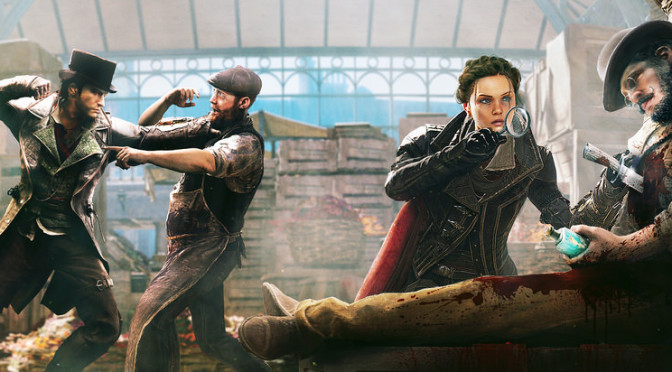 The leaves are turning, people are lighting  their open fires and the nights are drawing in. That can only mean that the autumn/winter gaming juggernaut is kicking into gear, as the big releases come thick and fast. If you’re not sure what to play next, I’ve got a nifty little guide to the titles to look forward to for the next few months.

Rhythm action games are back. First Rock Band struts back into your living room and now Guitar Hero. This time the guitar controller has buttons which equate to frets, as well as a live music channel and a rewards system that opens premium tunes. I’m expecting this to be a big hit this Christmas for family air guitar sessions.

This is one of my tops picks for autumn 2015. I’m looking forward to exploring my home town of London, Assassin’s style. Another highlight is the dual protagonist set-up. And lo, one of them is a woman. This time Ubisoft brings us into the Victorian era, the most modern setting so far, which will give us trains and an industrial backdrop. The technical disaster that was Unity means we have to approach Syndicate with some caution. Ubisoft needs a clean start for the launch of this game, to restore gamer confidence in the series.

One of the highlights for Wii U owners is Yoshi’s new yarn-based gaming experience. Expect much cute, colourful and all the things you could want from a Nintendo experience. Yoshi can knit new pathways or unravel things to reveal new things. It’s an interesting game mechanic, delivered with Nintendo’s whimsical charm. With no Zelda on the horizon, it’s the next best thing.

The Legend of Zelda: Triforce Heroes

Speaking of Zelda, if you’re happy to jump onto 3DS, then you can scratch that itch with Triforce Heroes. It’s a Zelda co-op dungeon crawl. How much awesome do you need?

Out: 27 October Platform: Xbox One

The first new Halo title for Xbox One and after 343 did such a great job with the last game, I have high hopes for this one. We don’t know much, other than Master Chief is sharing the spotlight with new character, Spartan Lock. This console exclusive will ensure team Xbox has a very happy Christmas.

If in any doubt, this cinematic should whet your appetite.

Out: 10 November Platform: PC/PS4/Xbox One

Without a doubt, this is the biggest game release of the year. If you’re not climbing out of a bunker on 10 November, your fellow gamers will wonder what’s wrong with you. It promises the same vintage nostalgia tinged with post-apocalyptic doom and desperation, but all with a slight tongue in cheek. This time you can enjoy weapons modding and building a fort.

Out: 10 November Platform: Xbox One

Not to be outdone by Fallout 4, Lara is swinging onto Xbox One on the same day. In another crucial holiday season exclusive, Xbox One owners are spoilt for choice. After the success of the Tomb Raider reboot by Crystal Dynamics, there are high hopes for this one, as Lara travels to Siberia.