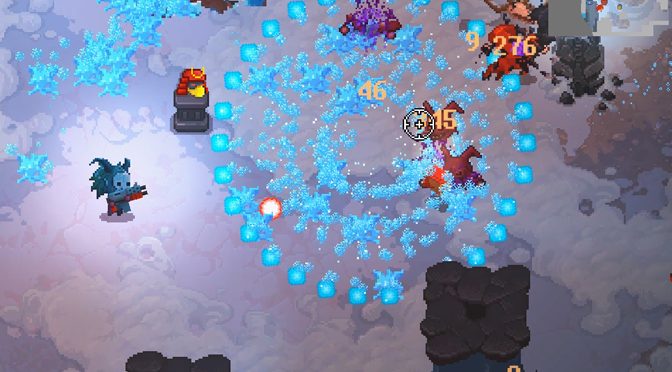 To Hell with Hell

We’re switching gears this week with an Early Access game. That game is To Hell with Hell. This is the rogue-like game that I was talking about last week. I feel like I have enough time in the game now to give it a proper look.

Let’s start off with what’s good about To Hell with Hell. If I’m being honest, the vast majority of the game is great. This may be Early Access, but it already feels like a somewhat complete game. The controls are tight, I ran into no bug or glitches, and it has a simple, yet solid setup.

The story in To Hell with Hell is all about the daughter of a demon out to seek some revenge for the death of her father. This daughter is Natasia , and while the game doesn’t come out and say it, she’s a prostitute. Asmodius is her father. He’s the ruler of hell, or he was, before he was overthrown and killed. Natasia takes a journey into hell to avenge her father.

The gameplay in To Hell with Hell is so good. It’s a top-down shooter in the same vein as Enter the Gungeon. Players can find several different weapons. These weapons will let them take down the demons roaming through hell. That isn’t to say the fight will be easy. To Hell with Hell prides itself on being a difficult game, and I think it’s doing well at that.

However, Natasia has another unique ability that makes her journey for revenge a little easier. See, she can wear different masks that transform her appearance and abilities. There’s a nice bit of masks for players to try out in the Early Access version of the game. This includes a mask that turns our heroine(?) into a ninja, another that makes her a fire-breathing demon, one that adds ice element to all of her shots, and more.

The different masks that the player can find while traversing through hell add a nice bit of variety to the game. Going through all the different abilities would take too long, but understand that each of them adds their own unique flair to the combat. They also give the player additional health, but break if all the mask’s health is depleted. My only complaint is that I can’t switch back to normal Natasia when I have a mask.

There’s also a perk system in To Hell with Hell. This system allows players to choose a special perk, such as more health, better damage and more, in between levels. These perks stack up, making Natasia more powerful over time. Luckily, the game also continues to get more difficult to account for this.

Now on to those rogue-like elements I was talking about at the start of this post. Just like you might expect, the levels in To Hell with Hell are randomly-generated. That means that players can get a lot of replayability out of the game with multiple playthroughs and differing dungeons.

Depending on the difficulty, the player will get a certain amount of saves. For example, there are six saves available on the easiest setting. There are also a total of 12 levels in the Early Access version of the game. This means players need to plan when to save so as to not use up all their saves before the end. If they use them all too early, they may have to play through several levels they’ve already beat to get back to where they were after death.

Honestly, this is the biggest drawback of To Hell with Hell. It assumes that I have the time to waste on a feature like this. I don’t. Rather than picking up and playing the game whenever I want, I had to specifically wait until I had enough time to dedicate to the game. That’s a real bummer, because it meant I didn’t spend near as much time with the game as I’d of liked to. It feels less like making the game more difficult, and more like making it a hassle to play. Here’s hoping it changes as development of the game continues.

There are also a couple of other small complaints I have with To Hell with Hell. The first is melee weapons. They take too long to attack with and don’t do enough damage to justify the risk of getting close to an enemy. The second is the machine gun. Like all other guns, it uses ammo. Okay, that makes sense, but it also overheats and has to cool down before players can use it again. That’s annoying enough, but then it also only cools down when the player has it as their active weapon. To Hell with Hell is a fairly fast-paced game, and this just breaks that by forcing the player to hide behind a wall until the gun cools down.

Graphically speaking, To Hell with Hell is solid. The game uses pixel art to great effect and the care from the developers shows. There’s a lot of little details to be found in the game. This includes excessive detail in death animations. That’s not a problem for me, but I just want to note it for those that take issue with that kind of thing.

The audio in To Hell with Hell is also good. I won’t say that it’s the best I’ve ever heard in a game, but it wasn’t bad by any means. All of the sound effects were spot on and the heavy metal music matches well with running and gunning through hell. There needs to me a larger variety of music, but this is only an Early Access game.

Overall, To Hell with Hell is shaping up to be a great game. It has a few small kinks here and there, as well as one major flaw, but it looks to have a bright future ahead of it. Maybe give it a look if it seems like something that interests you.

To Hell with Hell won’t be getting a review score because of its status as an incomplete game.