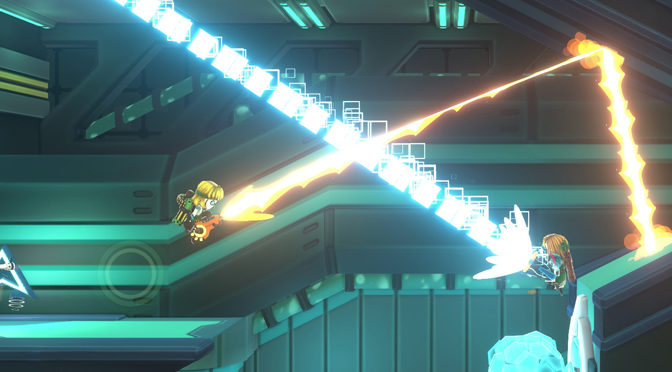 This week I’m looking at Holodrive, a game that’s still in Early Access on Steam. Why did the developers choose Early Access? Honestly, I’m not really sure.

Holodrive is a 2D arena game that pits two teams of players off against each other in various different types of battles. The game starts players out with a basic machine gun, but more weapons can be found on the maps and players can change their loadouts to affect which weapons they can pick up.

Honestly, the game feels balanced already and it has a lot of polish for something that’s sitting in Early Access. What’s even weirder is that the game costs $10 to buy at this time, but the developers plan to make it free-to-play once it’s finished. I’m really confused by this. As I already said, it’s polished and plays really well. It’s a bit quiet with there not being music when there should be, but that shouldn’t take that long to fix. It actually reminds me a lot of Team Fortress 2 as it is now, which isn’t a bad thing.

One problem I really have with the game right now is that it relies off of microtransactions. Players use Bits as their in-game currency and more can be bought with real money. This gives them access to better weapons and custom equipment for their characters. It feels a little too much like a pay-to-win system and I can’t really understand the concept of forcing microtransactions for a game that’s still only in its Early Access stage. Especially when it already cost $10 just to get access to. It really just feels like developer greed at this point, and that could hurt what I’ve already experienced as a very fun game.

The graphics in Holodrive feel a bit ripped off if I’m to be truthful. The game features these small robots with big heads that players dress up in different ways to make their own bots stick out. These bots have loads of personality, such as sticking their tongues out and jumping around in excitement, it’s just that all of that personality feels like it was shamelessly ripped out of a Sackboy from the Little Bit Planet series. Even the movement, such as jumping and using jetpacks, feels reminiscent of Sony’s 2D platformer.

Being that Holodrive is still in Early Access, I can’t really give it a proper review. However, I will say that it’s a very fun experience, even if it does feel as if the developers were a little too heavily “inspired” by other games. The true test of the game will be when/if it comes out and if its player base grows. Maybe it’ll be a big hit with a strong, active community. Hopefully I’m wrong and it won’t become a pay-to-win game that is only popular for the first couple of months after its release. This is always a risk with games that only have online multiplayer. Either way, I’d say give it a shot when it goes free-to-play, which the developer claims should be sometime this year.

Holodrive won’t be getting an actual review score due to it being in Early Access. Instead I’ll be using a placeholder score of 2.5 GiN Gems out of 5 until the game is actually released.