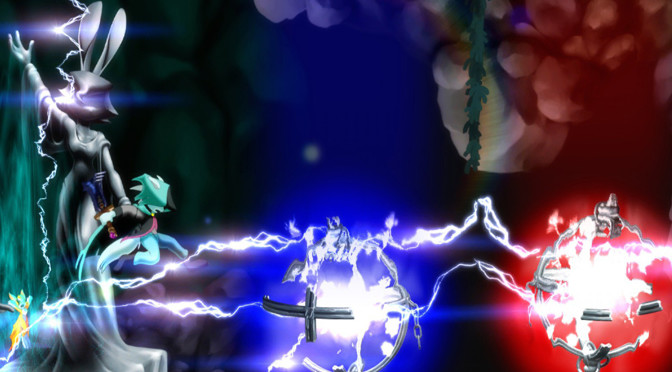 This week we’re talking about Dust: An Elysian Tail. This is one of those games that flew right under my nose when it was originally released on the Xbox Live Arcade, but caught my attention with its second release on Steam.

Dust: An Elysian Tail is an action-adventure game that puts players in the role of an anthropomorphic cat named Dust. Our hero doesn’t have any memories, but he is awakened by a magic sword that can talk and claims he summoned it. Along with the sword comes its guardian, Fidget, which is kinda like a furry version of a fairy. With the gang all together, they set of they discover more about Dust’s mysterious past.

Dust: An Elysian Tail is filled with likable characters. It’s been awhile since I last played a game and was just immediately drawn to the characters that inhabit it. This includes Dust, the townsfolk and other NPCs, and even Fidget, who plays the role of the annoying sidekick that doesn’t know when to shut up.

The world of Dust: An Elysian Tail is also easy to get involved in. As I said, the characters are likable, which made me much more sympathetic to their personal plights. I mentioned that Dust is an anthropomorphic cat and and almost all other characters in the game follow this design choice of being animals that have human features. This may throw up some red flags with some due to the close association with furries and the internet’s constant mocking of them, but don’t just think that this is a game made for that community, because skipping out on it would be a mistake.

Dust: An Elysian Tail is chock full of hack-n-slash combat on a 2D plane and it feels so good. Combos are started with a standard attack and continuing to hit that button will keep it going for four attacks. However, players can also add a special attack in for different effects, such as grabbing enemies, throwing them into the air and more. Dust can even team up with Fidget to create more powerful attacks that seeks out all the enemies on the screen. There’s also the ability to parry, which allows players to stun an enemy and get extra damage in on them while they recover. Pulling off different moves and racking up high combos takes practice, and players that take time to learn the different moves are well rewarded with additional experience for higher combos.

Speaking of experience, Dust: An Elysian Tail has some minor RPG elements to it. After collecting enough experience from side quests or fallen enemies, Dust will level up. Upon leveling, players can increase one of his base stats with a soul gem. This includes Dust’s max health, attack, defense and the power of Fidget’s special attack.

Dust: An Elysian Tail also features a crafting system. This allows players to create new equipment for Dust to wear into battle. Components for crafting are dropped by creatures randomly, but many stores also carry them as well. In fact, players can sell components to a store to make more of it available for purchase at a later time. It’s not a super deep crafting system, but it does add some extra flair to the game.

While I did play Dust: An Elysian Tail on computer, I used an Xbox 360 controller to do it. Veteran computer players will likely stick to their mouse and keyboards, but the game was designed for a controller and it just feels natural. Some of the menus felt a little clunky to navigate without one and the fast pace of the hack-n-slash gameplay feels smoother with a controller.

There’s one last thing that I want to point out about Dust: An Elysian Tail’s gameplay: it’s really easy for anyone that’s spent a small amount of time with 2D action-adventure games. I started the game on the normal difficulty and found the challenge to be more than a little disappointing. It’s fine for new players to the genre or casual gamers, but the more hardcore will want to turn the difficulty up to really enjoy the game.

Dust: An Elysian Tail is a beautiful game. The art style has an anime-inspired feel to it and the attention given to character animations is amazing. The first thing I did while playing the game was sit still and examine Dust’s idle animation. I was really surprised at just how much detail there was in it and it holds true for all other animations in the game as well. The only negative is that when characters enter conversations, blown-up versions of their sprites take up much of the screen. It’s obvious that these are just the normal sprites zoomed in as they have a bit of a grainy look to them.

The audio in Dust: An Elysian Tail  was much better than I expected. It’s not so much the music that caught me off guard, despite being enjoyable and fitting with the atmosphere of the game, but rather the voice acting. I’ve basically given up on voice acting in indie games because it ranges from making my ears shoot fountains of blood to only bleeding a little bit, but Dust has some really good voice acting in it. Not just good for an indie game, but good in general. It was unexpected, but extremely welcome.

Overall, Dust: An Elysian Tail is a really good game. If you’re like me and let this game slip under your radar, do yourself a solid and go pick it up. I grabbed my copy from a Humble Bundle awhile back, but it’s easily worth the $15 price tag with its beautiful world, voice acting and in-depth combat system.

Dust: An Elysian Tail earns 4 GiN Gems out of 5!