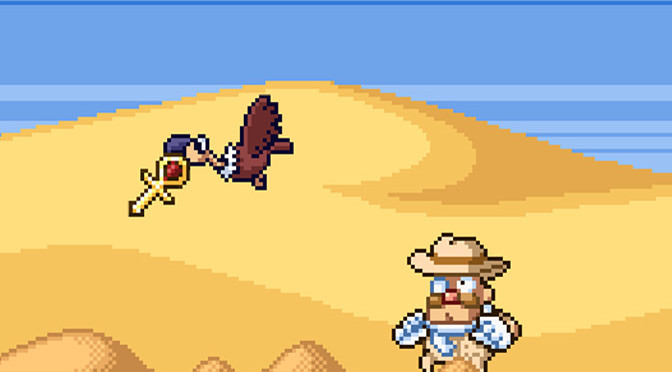 This week I’m here to talk about a small browser game called Duke Dashington. It’s been a while since I’ve actually done a browser-based game and I figured now was as good a time as ever to give it a go. Don’t be worried smartphone gamers, this week’s Time Waster also happens to be available on Android and iOS. Be warned though, I haven’t played those versions of the game and my review won’t reflect my thoughts on them in any way.

Duke Dashington is a side-scrolling game that challenges players to solve puzzles at super fast speeds. The hero of the game, for which it’s titled, is a treasure hunter that’s out to explore ancient ruins to fill his pockets. Unfortunately, every ruin he encounters starts to collapse as soon as he gets there.

With the ruins collapsing, Duke Dashington has only a few minutes to get in and out with the treasure before it’s lost forever. In fact, each temple has 30 rooms and there is a 10-second limit in each of these rooms. This means players will be working quick to get to the end.

It wouldn’t be fun if players were able to just dash through every room they found. Instead, rooms in the different ruins each have their own traps and puzzles that have to be solved before the exit can be reached. Solving puzzles in 10 seconds is a great way to challenge one’s mind and with there being four ruins with 30 levels each, there’s a lot of challenge to be had.

Duke Dashington isn’t our typical explorer; once he get’s going, he doesn’t stop until he hits something. This means that players will have to plan moves accordingly so that Duke doesn’t end up dashing his way into a wall of spikes or pit of lava. The limiting of the character’s movement in this way is unique in that it makes the game fast paced and interesting.

My time with Duke Dashington lasted for about half an hour. There were definitely a few challenges that I had to try over multiple times, but nothing was so bad that it made me frustrated enough to stop playing the game. Once the game is completed, players can take on the Time Attack mode. This mode keeps track of their time through each of the ruins and how many times they die during their runs.

I should also mention that Duke Dashington was produced for Ludum Dare 27. It’s obviously been refined some since it was submitted to the timed-game-creation challenge, but it’s still one of the best things I’ve seen come from the contest.

The graphics in Duke Dashington are solid. They have their own unique flavor to them and really look like they were made for a game that wasn’t made on a time constraint. Also, the hit boxes were dang accurate, which is a necessity for a game like this.

The audio in Duke Dashington is also good. Each of the different temples have their own music that matches their theme. They’re also all upbeat enough that they go well with the fast-paced gameplay.

Overall, I’ve enjoyed my time with Duke Dashington. It’s a great little browser game that  challenges players with tough tasks without forcing them to dedicate a lot of time to it. It would make a great lunch break game, or even a good way to kill time between classes. (So long as your college doesn’t have a Magic: The Gathering group like mine did. Always choose Magic when given the option.) It’s got some wonderful graphics and audio that really go well with the rest of the game.