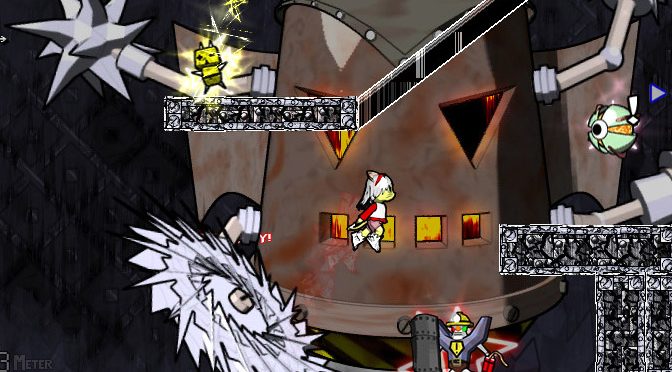 I’m back to the reviews after taking a break last week to throw some loving complaints Capcom’s way. The game that’s got my interest is Copy Kitty. This is actually a game that was provided to me by the publisher as a thanks for previous coverage. As such, I got the game for free.

I’ll start this off honestly: I made a mistake when first looking at this game. My initial thoughts upon seeing screenshots of the game was that it looked like a train wreck. The style of the game just looked so amateur and low effort to me that I was really loathing having to check it out.

Boy, was I wrong.

Copy Kitty sucked me in immediately with its fast-paced gameplay. The game is all about running and gunning though hordes of enemies to complete levels and defeat evil constructs. There are loads of abilities in the game up for grabs that players can use to defeat enemies. Our main character, Boki, can hold up to three abilities at a time. The player can choose to use these abilities separately, or combine them together for more powerful attacks. There are loads of abilities in the game and a total of 175 combinations. I didn’t come anywhere close to finding them all, but I can’t deny enjoying just about all of the ones I did experience.

To go along with the copy ability, Boki also has her own set of moves. This includes a small, slow beam that is almost useless, but can be used if the player ever runs out of abilities. The next major one is a kick attack. This deals decent damage and is a great way to start off if the player is lacking in abilities. It also has another purpose as well. Players can kick incoming projectiles to either block or reflect them. Boki can also perform a roll that acts as a dodge from enemy attacks and can double jump too.

Copy Kitty is a great game that fans of platformers like Mega Man and Metal Slug should go play. There’s a lot of abilities to play with, two different characters, and an endless mode to try out. Players can also challenge Hard Mode is they find the normal campaign to be too easy.

While there’s so much good to say about Copy Kitty, there also some bad. I’ve already mentioned that the game doesn’t look the best, but I mean that in terms of character design and art style. However, its visual effects for fighting enemies is great. No, what really weighs Copy Kitty  down is its length. The game is about six hours long and it overstays its welcome a little bit. I’ll note that I played through the game in a single sitting, but I still feel the end was a little dragged out. I thought I was done with the game on three separate occasions, and this led me to feeling exhausted that I was still going.

Another weak point for Copy Kitty is the story. It’s really not all that important because it takes place inside a virtual simulation. nothing about it really matters and so it instead tries to go for that whole personal growth perspective. It really doesn’t work all that well for me, but at least the rest of the game is great.

Overall, my time with Copy Kitty was well spent. The game may go a little long, but it’s good at keeping the player entertained by constantly introducing new elements and abilities. It’s visuals may not be the best and the story doesn’t matter, but the rest of it is a blast.