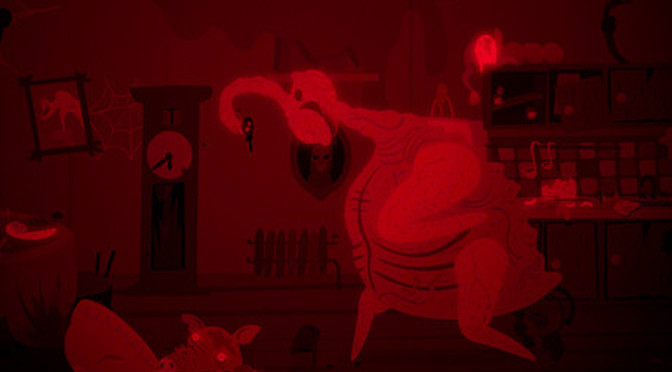 This week I want to talk to you all about a game called Bulb Boy. It’s an interesting point-and-click game that has a huge focus on horror. It would’ve made for a wonderful Halloween piece this year, but that position was taken by The Park.

Bulb Boy puts players in the role of a young boy that has a bulb for a head. The game starts out with the young lad spending a normal evening watching a He-Man spoof with his grandfather. However, things quickly change when a dark shadow approaches the house and attacks the boy’s grandfather.

Being a point-and-click adventure, Bulb Boy will require players to figure out puzzles and use the correct actions to make their way through the house. Our protagonist has a few tricks up his sleeve that makes this an interesting endeavor.

One of Bulb Boy’s special abilities is that he can remove his head from his body. The decapitated head can still move around on its own and the body will follow it to the best of its ability. This can be used to make it past certain enemies. The disembodied head can also take over other bodies, many of which have their own unique abilities.

The puzzles in Bulb Boy are wonderful. None of them are very hard to figure out, but they do require a bit of creative thinking to complete. There are also several boss monsters in the game that must be defeated through a series of actions. Players that think they’re safe in a game of this genre are wrong. Bosses, and many other monsters, can kill the young hero if the player isn’t careful. This helps the game stand out from other horror point-and-click games that I’ve played recently. Granted, I don’t play many, but those that I have don’t really allow the player to die.

While Bulb Boy is filled with wonderful puzzles and unique gameplay, it does have one major problem; it’s too short. I played through the entire game in roughly two hours. This was a major disappointment for me. I was having so much fun with it that I didn’t want it to end. I could also see this turning other players away from the game. Shelling out $10 for two hours of entertainment is steep.

Bulb Boy has some really great visuals. The entire game is covered in shades of green and this helps add to the horror feel that it’s going for. This changes when the player dies. Everything immediately turns red and this contrast added to that horrible feeling of knowing you just got a child killed.

Bulb Boy may be 2D, but this doesn’t stop it from being grotesque. Everything in the game is disgusting and it works very well for it. There’s also a lot of over-the-top animations that feel like they come from Saturday morning cartoons. This and the truly revolting details added to the game’s environments and enemies help it stand out among other 2D games.

The audio in Bulb Boy is also a treat. The music is all weird and off-tune. This helps increase the creepiness of the game’s atmosphere. This is also helped by many of the disturbing sound effects. The game doesn’t have normal voice acting. In fact, there’s really not text in the game either. However, emotions and ideas are conveyed through thought bubbles and the garbled speech of the characters.

Overall, Bulb Boy is disgustingly charming. It’s got great gameplay that isn’t too hard or too easy. The visuals are great and are complemented by its spooky soundtrack. The only real downfall to the game is that it’s really short, especially for the price. Still, if it’s possible, I’d advise adding it to your library.