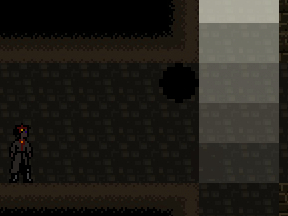 I’m still lost in the depths of the internet searching for Time Wasters to bring to you good folk. This week I came across Sanguine, a game all about stealth, platforming, and pixilated blood. The basic story behind Sanguine is that we are a vampire recently resurrected by an evil dark lord who wants us to act as a distraction while he raises himself up to ultimate power. Not one to be a pawn our vampire named Elly is guided by a flame spirit to stop the dark lord.

Defeating a dark lord isn’t going to be easy. Elly will have to use everything at her disposal is she wants to stop the dark lord. Luckily being recently reborn as a vampire has distinct advantages, like being able to survive gun shots and having extreme agility. Just because Elly can take a few shots though doesn’t mean we should start jumping around all willy nilly. Stealth as I mentioned before is a huge part of the game. Hiding behind boxes, hanging from ceilings, and donning disguises is going to be what gets Elly through it all.

This is only one part of the gameplay though, being a vampire means that Elly needs to feed to keep her strength up. A bar at the bottom of the screen lets us know how much blood Elly currently has in her reserve. No blood means that Elly will die instantly from being shot but that’s not all, her strength and speed are also reduced causing her to be unable to jump as far and makes her run slower. This being said we’ll have to keep her feed with the blood of her enemies.

Moving on from the gameplay we have the graphics. Sanguine looks like a game that would be found on an NES cartridge. Think Castlevania right down to the same style of maps showing Elly’s progress at the end of every level. One small note was that while in one of the lower levels of the game I noticed a suspicious layout in the level, it was arranged almost exactly the same as level 1-2 of Super Mario Bros. This was a nice little reference to the past that made me do a bit of a double take when I noticed it.

Sanguine has a nice bit of audio to go with its gameplay and graphics. The muffled screams of people as they are fed upon and the sound of a blade hacking up a shotgun totting man all sound very authentic to the NES era. Not just sound effects but music as well fits the game. A nice 8-bit soundtrack goes a long way when trying to replicate a long gone era of gaming.

Sanguine is a great way to sit back and kill an hour of two with its classic Castlevania styled gameplay and graphics and the wonderful audio. It’s unique with the idea that a lack of blood makes you weaker and the stealth elements offer plenty of challenge to the hardcore gamer. Wrap this all up and we have a wonderful little platformer that’s full of retro loving content.

Sanguine slashes its way to 4 GiN Gems out of 5!