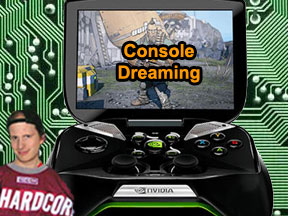 So here we are in 2013. MAGFest is in my rear view mirror, (and yes, it was once again an amazing experience) and now it’s time for me to think ahead for this upcoming year.
This week is the Consumer Electronics Show, (CES) where all the electronics giants try to impress us with their latest and greatest technologies. I also remember how before gaming exclusive events such as E3 and PAX, it was CES that showed what new games or systems (pre-crash) were coming out, and on computers such as the Commodore 64 post-crash.

But here it is, CES 2013 and we’re now seeing game consoles. But then again, these aren’t the typical consoles that we are used to. On one end, Nvidia has announced their new Project Shield gaming device. The Shield looks like a game controller with a five inch tablet clamped onto it, but runs on Android. The interior features the brand new Tegra 4 chipset which is said to offer six times the graphics performance of the Tegre 3.

From someone who has seen the Tegra 3 first hand, (my ASUS Transformer Prime tablet was the first to feature the Tegra 3) I can only imagine the potential. The Shield also features a micro USB and, thankfully, a microSD card slot, the latter of which I wish that some tablets would include. I’m looking at YOU, Nexus 7!

The Shield can also stream games from your PC but there are some restrictions to be aware of. First off, the streaming can only be done via Wi-Fi, and lag can be an issue at times. Also, it can only stream off of computers that have the Nvidia GeForce GTX 650 card or higher. Anyone with less than that or an AMD/ATI chipset will be screwed.

I like seeing how my choice for Platform of the Year last year is coming into fruition. As I said my Prime has replaced the PlayStation Vita as my choice for a portable gaming system. Sony dropped the ball and Google and ASUS were there to pick it up. Now it’s Nvidia’s turn. If they can get the streaming part down part we may have a winner.

On a more convenient tablet side, Razer has announced their Edge gaming tablet. Formerly called ‘Project Fiona,’ the Edge will run a full version of Windows 8 (compared to Windows RT that current Windows tablets use) with an Intel Core i5 or i7 processor and Nvidia GeForce GT640M LT graphics.

Body of a tablet, guts on an ultrabook, but with physical controls on both sides of the tablet. In my opinion this is the way the Wii U control pad should have turned out.

Even better, the Edge can connect to a dock via HDMI to play on a television, and can hook up extra controllers. It’s a very impressive device, but like other Razer products it will be the price that scares me. The base i5 model with 4GB of RAM and a 64GB SSD drive runs for a grand. Want to just up to an i7 with 8GB of RAM and a larger SSD drive? $1,299! Razer is turning into the Apple of PC hardware but come Q1 of this year we’ll have to see how well it turns out.

But what about the ‘big three?’ Well we’ve already seen how the Wii U is performing, and despite a lackluster launch where the system was obviously launched before it was ready, (remember that Nintendo actually encouraged buyers to upgrade the Wii U before giving it to little Jimmy on Christmas Day,) I do see potential in the system. It’s just going to take some time. Look at what happened with the PlayStation 3. Also I’m sure we’ll be hearing about the Xbox 720(?) and the PlayStation 4 come E3.

What about Ouya, the Android console that caught my eye last summer? Well, development kits have already been shipped out, and I am looking forward to the final release. I can’t wait to see how it turns out.
Yes, 2013 is going to be an interesting year for new consoles, and we are only two weeks in!