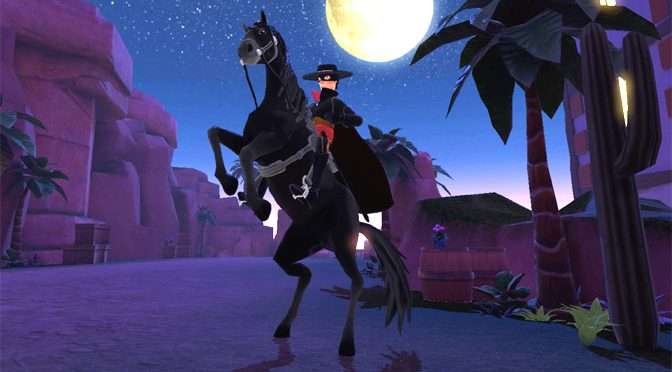 I grew up watching black and white re-runs of Zorro; I even watched the 1990 live action show. When I saw the chance to play a Zorro game, I was beside myself with excitement. How could I not be? More to the point, I was stunned to discover that apparently, the game is based on a 2016 cartoon. The target audience therefore is children who are fans of the series. If you plan to play this game, you need to embrace that fact right now. Overall, as a fan of the IP despite my ignorance regarding the cartoon, I’m more than willing to overlook some of the game’s shortcomings, but your mileage might vary. 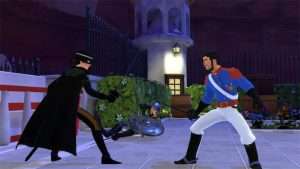 Zorro: The Chronicles the show features a teenaged Don Diego de La Vega who takes up the mask to right the wrongs perpetrated by the Spanish garrison and its leader, Monasterio. Ines summons Diego back from Spain in order to use his fencing skills to defend the people of Pueblo de Nuestra Senora Reina de Los Angeles. Diego returns, conceals his skills with a blade and whip behind a foppish persona and creates the character of Zorro. Ines aids Zorro via magic tricks she learns from her Chumash grandmother. Diego operates out of a cave sanctuary where he stables Tornado, the fierce stallion Zorro rides.

The game does, well, exactly the same thing but rather than episodes, you play through eighteen stages. At the start of each stage, you must choose between Don Diego and his twin sister Ines as your player character. The choice makes a difference. While Diego can effectuate more creative takedowns, Ines begins each stage with more health. 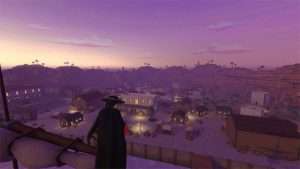 One of the things Zorro: The Chronicles gets very, very right is the tongue-in-cheek flair of the story. Dona Ines, for example, can summon her horse to kick members of the garrison out of her way. In a side mission, you’re supposed to put up fake wanted posters featuring Monasterio’s face. Furthermore, while the game heavily focuses on combat, nothing is ever lethal, which is in keeping with a game targeted at a younger audience.

The gameplay is incredibly straightforward and seems to be a mix of combat and stealth mechanics. The stealth is pretty forgiving—think somewhere along the lines of early Assassin’s Creed games but with even more options in the event that you break your cover. Combat changes a bit as the game progresses as you do have a skill tree that you can follow, providing upgrades to both Diego and Ines. That, too, is straightforward and easily navigated. 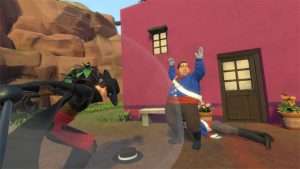 As far as enemy types go, it’s a pretty solid mix of random guardsmen, the occasional armored guardsman/soldier, and snipers. You will need to look out for those, but you’ll see the moment they get a bead on you. When the dotted line turns red, the sniper is firing. In fact, the game is replete with visual cues, so it’s difficult to nearly impossible to get lost. The game also features bonus areas that may require you to battle several enemies at once, but the enemies themselves advance very slowly, enabling you to engage them one at a time, reducing the difficulty level. 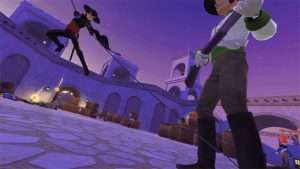 Zorro can and does take advantage of his or her whip to reach high vantage points, conjuring up additional memories from Assassin’s Creed. Some of the combat moves, however, feel like stripped down Arkham mechanics. There remain very Zorro-specific moments of flair, however, because yes, you do occasionally get to use a sword to carve Zorro’s trademark “Z” into various guard uniforms, which I found to be intensely rewarding. 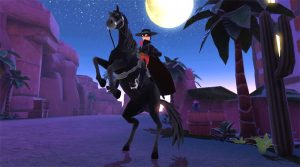 Visually, the game capitalizes on actual architectural elements from Spanish colonial haciendas, including courtyards and elaborate tile designs. The animation very clearly takes its inspiration from the show, which itself was rendered completely in CGI. The soundtrack isn’t particularly interesting one way or the other. Zorro: The Chronicles lacks voice-acting nearly entirely, though Monasterio can scream “Zorro!” with great rage. 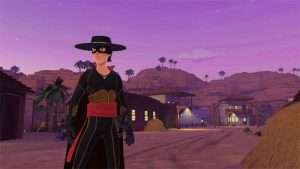 In terms of gameplay, the controls were a little awkward, but the game’s biggest problem was a particularly sticky camera. Some of the combat sequences can become repetitive, but that’s not a huge problem given that each stage is fairly short, assuming you stick to the mission. The game’s total playtime runs between four and five hours or more, if you’re a strict completionist. 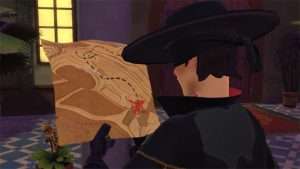 Zorro: The Chronicles really is a kid’s game, and the linear gameplay just hammers that home. There are some off-color visual gags that parents might want to screen before turning younger players loose, and as I mention above, combat is the game’s bread and butter. However, the level of combat is pretty tame. Overall, if your kids are watching any standard Korean kids’ show, they’ll be fine with Zorro: The Chronicles.

For adults, you’re probably not going to find much challenge here, but the game can be remarkably calming in its simplicity. It also helps if you’re a fan of the IP. The game does offer replayability in that you can replay each mission as often as you choose, but really, this is a game for kids who are watching the show.

Zorro: The Chronicles is available for $29.99 on the Steam Store.