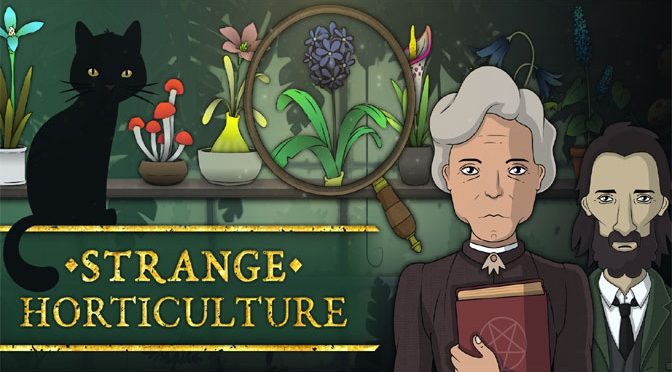 Strange Horticulture is a unique game where you run a small apothecary shop specializing in magical herbs, but also work to potentially solve mysteries and maybe even save the world with your near magical plant-based formulas.

As someone who has a mild interest in plants, “Strange Horticulture” seemed right up my alley. What I wasn’t expecting was the pleasant challenge of dipping my toes into Undermere’s occult mystery. Strange Horticulture is mostly about choosing the right plant, but by choosing that correct plant, you can save the world. 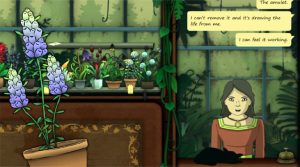 Strange Horticulture opens with you inheriting the eponymous shop from your uncle and all the responsibilities that go along with it. You’re part apothecary, part confessor, and part simple florist for Undermere. Strange Horticulture begins as a life sim; meeting customers and caring for their ills is a significant part of the game. The other half of the game is a puzzle, which is determining which plant in your collection fits the customer’s needs best. As an added bonus, the game allows you to color code and label your plants, which I highly encourage you to do as it saves time down the road. 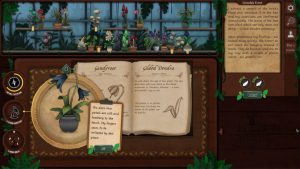 You aren’t limited to the confines of the shop either. By correctly doling out plants, you earn “Will to Travel” points, which you’ll then use to complete different missions in search of, you guessed it, more plants. However, Undermere isn’t just the sleepy little hamlet it seems to be at first blush, and by first blush, I mean the opening image of the game. Strange Horticulture wastes very little time in introducing you to the more mysterious aspects of the game. I believe it’s the third customer who comes into your shop looking for something to help her sleep because she keeps dreaming of a black clad, skeletal figure, and the dreams keep her from getting restful sleep. Not long after that, a gentleman comes to you to trade for some lemon dandy and complains about the dark sisterhood of witches living out in the forest. 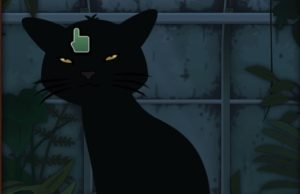 When I mention going on missions, it’s not entirely that. Strange Horticulture keeps you bound in a single room with a cat for the roughly four hours of playtime the game offers, so don’t expect to go walking around the map. You go on these missions, but you really only get to read about what you found. That said, you do need to chase down the leads provided to you either by correspondence or from word of mouth because that’s one of the ways you can get your paws on some of the more important plants you’ll need to complete the game.

Yes, you’re a shopkeeper, but you’re a shopkeeper who may or may not have the perfect plant someone needs to save the world or doom it entirely. In order to have that plant, you do need to do some exploring, even if it is only via text. Be prepared for more puzzles, though. These missions offer mini-puzzles that I found more challenging than the plant identification puzzles, keeping the explore feature entertaining. 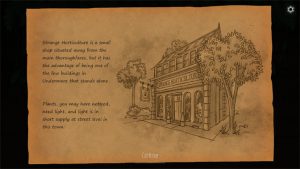 I truly don’t mean to imply that Strange Horticulture is boring for all that you spend your gameplay time behind the counter. First, finding the correct plant to solve each puzzle is incredibly satisfying, and bear in mind that you aren’t bound necessarily to give the customer just what they want. You do have the leeway to exact some petty vengeance here and there, which adds another interesting dimension to the game.

Strange Horticulture also centers you in the mystery. You hear rumors of a murder, and every night you dream of a young girl running away from something. In addition to the sisterhood of witches that may or may not be up to no good, there’s another cult that your customers describe to you. They apparently worship some sort of plant monster, which seems right up your alley. 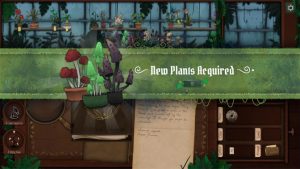 As previously mentioned, you will never leave your shop, but you can read about your adventures through your UI. Personally, I rather cared for that touch because it communicates very effectively that your main interest and even vocation is being the plant expert in your small shop. Adventures are great and all, but for you, identifying and labeling plants is the primary goal. There is a fairly well developed hint system should you find yourself stuck, and you do begin the game with a guide that provides you just enough information. As you identify plants, you will manage to increase not only your collection but also the information you have at your disposal. The initial puzzles pose comparatively little challenge—I found figuring out where to find the guide more difficult. Hint: it’s in the desk drawer. However, as you go through the game, you’ll need to remember that just because one plant has curly leaves, it might not be the exact plant with curly leaves that you want. Pay attention. 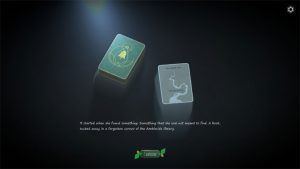 The plants themselves start from the mundane and move to the utterly bonkers. You go from simple plants that can be used to craft sleeping potions to plants that will allow someone to pass through a crowd completely unseen, so there’s a fair amount of entertainment to be had just categorizing your plants. Your customers will have various needs and may not even know exactly what they need, so in addition to identifying plants, you’ll need to identify what ails the people of Undermere.

I mentioned above that you have the opportunity to exact a certain petty revenge, and you do. Just because you have the ability to cure an ailment doesn’t mean that you necessarily have to give that person the remedy. On at least one occasion, choosing harm was not only more satisfying but worked out better for me in the end. 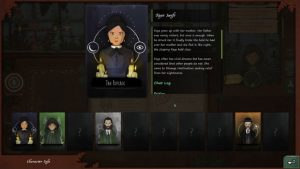 The game is lovingly realized entirely in hand-drawn 2D, and that was a perfect choice on the part of the developers because the art style fits nicely into the weird world the game creates. You’re somewhere between a gothic Edwardian (?) village and a standard flower shop, so more realistic graphics would have taken away from the sense of whimsy. Too cartoony, and the very real potential for world destruction wouldn’t feel legitimate. 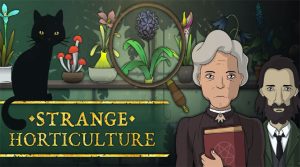 Strange Horticulture is a remarkably well-developed detective game, and I have to admit, incredibly relaxing. Aside from the potential world-ending activities of the folks outside the door, categorizing your plants and even color-coding your labels is shockingly calming. The game autosaves, so if you need to do so, you can simply exit and go about your life. With the automatic updating of your herbal guide, you don’t even necessarily have to remember what plants were which, but I do recommend that you sit down and start labeling. While your initial collection is quite small, if you play the game right, it will not remain so, and you’ll need to remember what plant to use when. 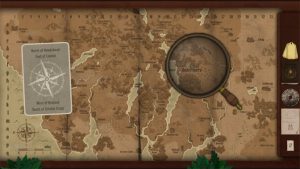 I didn’t find anything particularly objectionable about the game, so if you’re thinking to allow a younger child to try it, you’re probably safe. That said, as always, you should play through a game a bit before turning your munchkins loose in the game world. As far as “replayability” goes, Strange Horticulture really only works for a second playthrough, in which you choose the opposite ending from the one you previously chose. After that, unless something changes, Strange Horticulture doesn’t offer much that’s new in a different playthrough as you’re still largely doing the same thing. Admittedly, your mileage may vary on that point.

That said, I loved every minute of this game from the moment I opened the shop to the last choice I made. If you’re looking for a detective game in a quirky setting, I can certainly tell you that you’ll very likely get your money’s worth out of Strange Horticulture. The game is currently available on steam for a promotional price of $13.49. Now, I have a paphiopedilum Little Pink Viper to go mist.