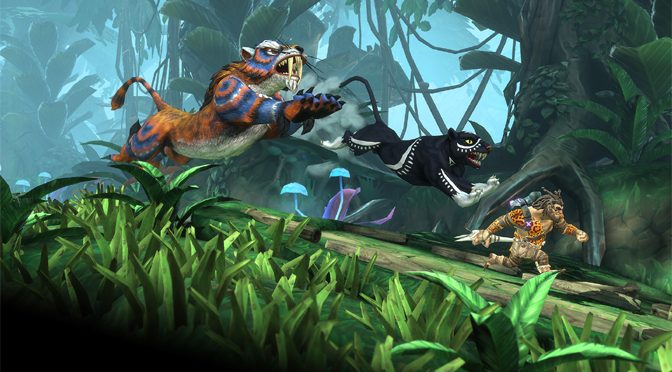 Hey gamer fans! Welcome back to another glorious Saturday morning with yours truly, the Modern Gamer. I know it’s been pretty cold with it being the beginning of the year and all. But this week we have a fantastic way of warming things up with an all-new 2.5D game called Jet Kave Adventure.

Now when I saw the title I was expecting something more like a 2D puzzle. No it’s nothing like that, it’s a platformer in all its glory. Not only that, but it’s graphics take me back to when I was in high school when games like Crash Bandicoot ruled the roost. I seriously enjoyed playing Jet Kave Adventure. 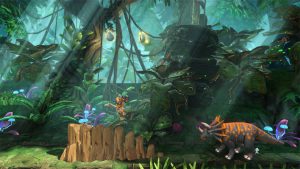 The story opens up with a short tale about how humans and dinosaurs lived together and how Kave (the leader of his tribe) found a place for his tribe to stay. Problem is, they didn’t want him around anymore. So poor Kave is kicked to the curb. (literally) Just as soon as Kave is at the ledge, we see an alien spaceship crash land and knock Kave off the ledge. You are then taken through a few tutorials that eventually leads you to the crash site and the alien. The alien knocks Kave out and looks to the horizon to see a volcano. The Alien thinks he can find a new fuel source and leaves.

Meanwhile Kave wakes up and touches a jetpack that then transfers to his back. Now he’s ready to fly. 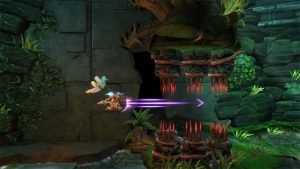 But it’s not really flying. It’s more like very long range jumping because there’s a limited fuel supply, which recharges once you’re on the ground. There are some fuel tanks lying around. You do have the usual options of hitting things with your bone club, jumping and crouching, and you are even able to throw a rock from a slingshot from a distance. But you’ll want to save the rocks for later.

You can’t really aim the sling; it just goes in one direction. Now what I found that was really nice is that you can eat and then heal yourself. 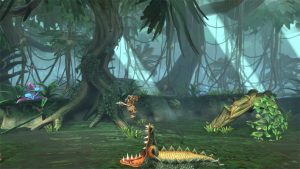 You don’t find that in many games these days. Where does the food come from? Your enemies of course! You also get some potions and extra rations when you hit certain pots. There’s also the collecting of shells. The more shells you can gather, the more points you get at the end. Kind of like the old Mario/Sonic games.

So what about the jet controls? You’ll have to find that out for yourself. I will say it’s nice when you get it as you can double jump. The physics of the game are also spot on it. I don’t have anything to complain about. It’s just perfect. 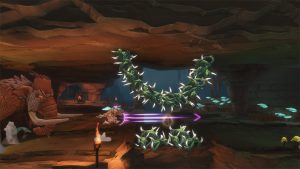 Speaking of perfect, the graphics are fantastic. It has the quality of the Croods movie graphics but not so saturated a color palette. Which I think really brings the game out too. Sometimes you don’t need a heavy palette to catch the players eye, it’s all about balance. This is exactly what this game looks like. The scenery is beautifully balanced with the cartoonish style that is very close to Blizzards. Which is a huge compliment in my opinion. The flowing water is like wow, along with everything else. But I digress, guys you need to play this game. Grab a copy of Jet Kave Adventure on Steam or the Xbox and get ready for some stone age action. That’s all for now, Modern Gamer out!

Don’t forget we’re still working on a brand new live stream and show. So be on the lookout. And if you’re curious about what the Modern Gamer does on her off time. Check out linktr.ee/delerias.