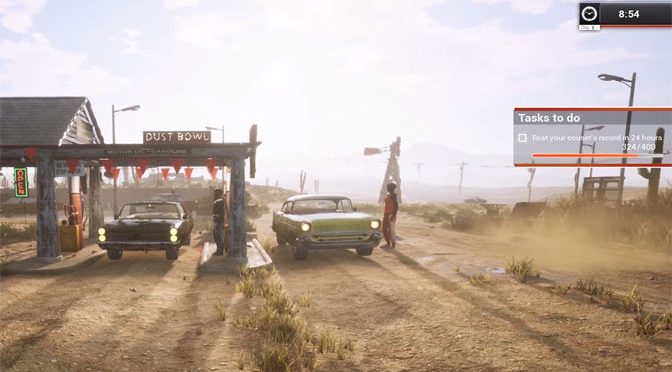 Gas Station Simulator tasks you with rebuilding and refurbishing an abandoned gas station somewhere along the storied Route 66 in the American Southwest. You will also be dodging your uncles goons and generally trying to keep the aptly named Dust Bowl station above water.

I’ve never really played one of these simulator-style games, so I was a bit startled to discover that the Gas Station Simulator is one of the top-selling games on Steam right now. However, after spending some time behind the keyboard, I can begin to see the appeal. There are a lot of moving parts, and while there are some slightly annoying minigames (cash register, I’m looking at you), overall, the game is a satisfying exercise in “building” something from nothing. 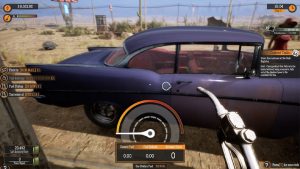 The game opens with you driving your antique vehicle down a deserted stretch of what is meant to be Route 66 somewhere in the American Southwest. You pull up to the oddly named “Dust Bowl,” a derelict gas station that you apparently purchase at the expense of your car. The rest of the game involves re-vamping, refurbishing, and restoring the Dust Bowl while paying off your shady uncle’s initial investment. You generate funds by pumping gas, selling snacks, and repairing vehicles that break down in your vicinity, but in order to attract customers, you do have to keep your gas station clean and presentable. All of that, of course, gets complicated by the occasional event, such as young Dennis coming along to tag your buildings, or by the very customers you’re trying to serve tracking dust into your pristine buildings. While it’s a lot to juggle, you have to maintain the balance if you want to avoid being beaten up by your uncle’s goons. 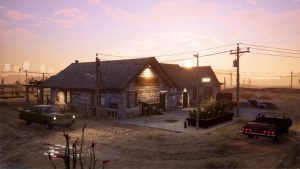 You do not in fact avoid getting beaten up by those goons. During the sequence to unlock the warehouse, you run afoul of a bizarrely short turnaround time for a loan, even considering your uncle’s status as a loan shark. The phone rings, and a stereotypical ruffian appears out of nowhere to beat you insensible. This isn’t much of a spoiler considering it happens within the first hour or so of gameplay, and that’s literally the story. In a certain sense, The Uncle and his vaguely threatening manner fit the ambience of the game, which takes place during an undisclosed time period along an unspecified stretch of Route 66. I guessed Arizona at first considering the presence of saguaro cacti, but the California highway patrol frequents the Dust Bowl. Maybe it’s along the Arizona/California border? 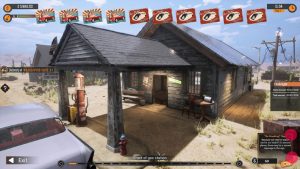 Honestly, as someone who has spent a not insignificant amount of time in the American Southwest, trying to figure out when and where this gas station is located formed part of the game’s entertainment for me. Many of the cars are antiques—ranging as far back as models from the fifties—seeing antique cars in the desert is not uncommon, so their presence in the game is not indicative of any particular time frame. The computer in your station is an old CRT monitor, which is consistent with some of the eighties model cars you see and the fact that you use a literal phone booth to make and receive calls from The Uncle. However, the items you can buy to stock your station are all modern. The vaguely fifties vibe of the station’s design would also be consistent with stations you can find along Route 66, but parts of this design don’t feel like an homage.

Gas Station Simulator therefore exists in a world of its own, and admittedly, it is a world that doesn’t really need the veneer of the plot that the developers give it. The fact that you’re playing the game suggests that you have already bought into the idea of revamping a gas station, and that’s really the draw of the game. You clean up your area, upgrade the garage and store, and you can customize your station to your heart’s content. That’s the real appeal of the game because achieving all of those things gives you the neurotransmitter boost associated with accomplishing a goal. Make no mistake, that’s why Gas Station Simulator is as addictive as it is. 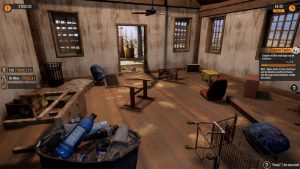 The game itself is comprised of a series of mini-games, including pumping gas for your patrons. As an aside, while there are states in which you are not legally allowed to pump your own gas, none of them fall along Route 66. However, at the Dust Bowl, you offer full service with a smile. Eventually, you expand your offerings to include car repair, and once that happens, the requirements of running the gas station start to get out of hand. The game forces you to hire staff, but you do have the option of determining where these employees go. You get access to their bios, which indicate where their skills lie, and you’ll note that the game AI allows them to improve at their jobs with practice. Occasionally, your employees get bogged down in a task, leading to some ridiculous results, such as an employee eternally walking into a wall. This is a pretty clear glitch as is the game’s tendency to crash. 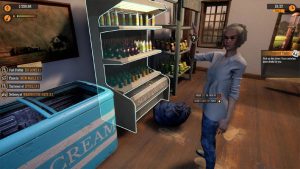 In terms of game design, you have shockingly little control over when and how your employees work, so they’ll just leave whenever they like. The game doesn’t notify you of their departure, so if you don’t pay attention, you can end up with a stream of angry customers and the resulting hit to your station’s popularity. Thus, while the game sort of discourages micromanagement, you do have to stay on top of your employees. The fact that you can’t really control this aspect of gameplay seems oddly out of place in a game that allows you to control so very much of how your gas station looks and functions. Stocking your shelves is also a touch strange since you don’t have the option of setting the price for the items you sell. Plus, the prices at which you purchase the items seem to fluctuate arbitrarily, prompting you to stock up on items when they happen to fall below market price. Fortunately, you do have upgrade options for your warehouse in order to store your Costco-sized purchases of soda and snacks whenever you identify a good deal. 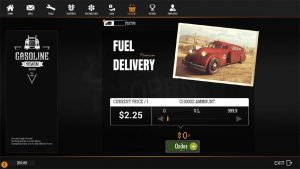 The developers do release updates pretty rapidly, and considering the game’s bugs, it’s a good thing they do. When I sat down to play through the game, they were already on the second update. If you’ve played the game before but not recently, you’ll be glad to know that your employees can no longer get stuck in the warehouse. They’ve been granted the ability to open doors, and apparently, there are further fixes to the employees in the offing. They’ve also rectified some but not all of the crashing issues, so you should expect some interruptions to gameplay. 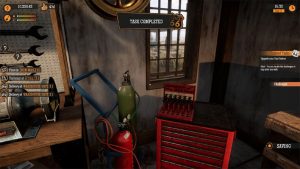 Ultimately, though, the game comes down to sweeping and keeping Dennis at bay because cleanliness is next to godliness as far as your customers are concerned. Drago Entertainment has fully embraced the idea that sand gets everywhere, and there’s actually a meter in your GUI that indicates dirt levels on your floors. The levels require that you sweep constantly. The GUI also keeps track of objectives for you, meaning that you won’t get too lost in the workaday minigames, and you can close the gas station in order to accomplish things without worrying about customers who can and will pile up. There’s a party bus function that will inundate you with customers. If that gets too intense or traffic in your warehouse gets out of hand, you can call a UFO, which will arrive and abduct everyone. I like that the developers not only included a massive red reset button because they anticipated some of the game’s problems but also opted to lean into the absurdity of the situation. In case you wondered, the UFO call button is located adjacent to the lever that closes the station.

All in all, Gas Station Simulator offers around twenty hours of gameplay, depending on how focused you become on crafting the perfect gas station. Don’t discount that impulse; you’ll be surprised at how far into the weeds you’re willing to go. Gas Station Simulator goes for $20 on Steam, and believe me, you will get your money’s worth despite some of the stranger bugs you’ll encounter. Don’t think too much on it; just go sweep up and keep earning that money for The Uncle. 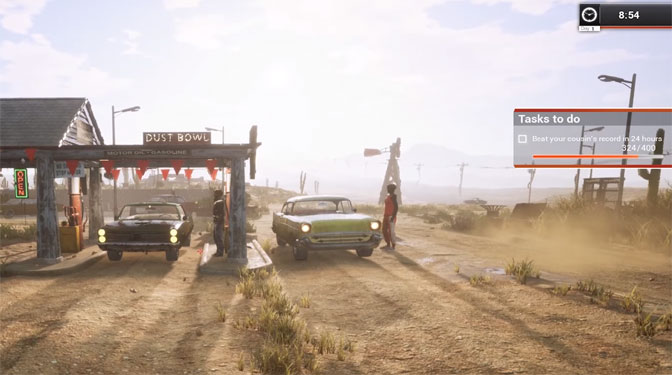