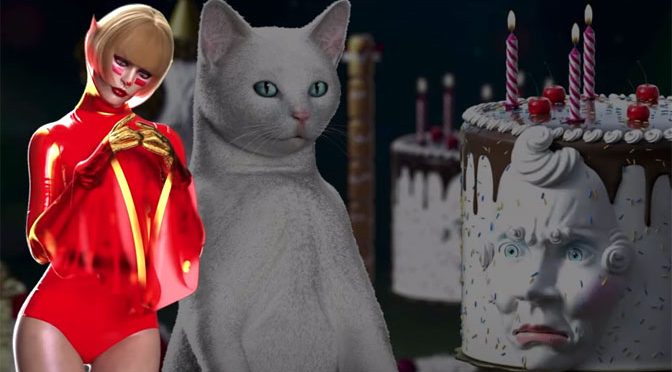 I have to admit, while I knew going into the game that About an Elf was weird, I wasn’t entirely prepared for the extent of the weirdness. If you’ve ever wanted to play Salvador Dali: the Game, then, yes, About an Elf is definitely for you. 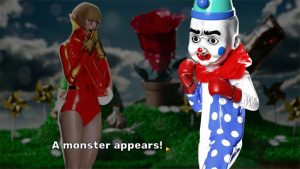 About an Elf occupies a particularly bizarre niche, crossing several game genres. The game is mostly in the vein of a visual novel, in which you follow along with Elven Princess Dam in all of her latex-clad glory and her trusty sidekick cat, Roland as they team up to try and defeat monsters in order to found a new elven utopia. I believe the term used is actually “Elftopia,” but my memory of this game is all over the place. Aside from the storytelling elements, which I won’t spoil here, if that’s possible, the game incorporates some point-and-click adventure game and RPG elements as well. Those elements take a back seat, however, to the story.

I’d argue that About an Elf is an exercise in telling a story about stories because the plot really isn’t actually the point here. The framing story is that Dam is recounting her adventures to the similarly-latex clad Dido in exchange for a single gummy bear, and it takes about five minutes of gameplay for you to figure out that Dam is far, far from a reliable narrator. The game pings back and forth between what is theoretically the present and the past, in which you play through the events themselves, so you get to see for yourself that Dam embellishes details, fudges others, and outright lies at times. The story itself is profoundly odd, but you quickly realize that it’s not so much the actual story that the game wants to explore so much as the telling of it. 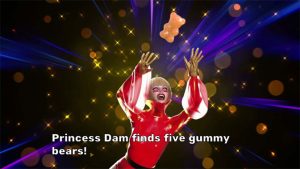 While About an Elf really is mostly all visual novel, there are some combat elements, but these are fairly straightforward. You’ll encounter enemies, and Dam has “Magiballs”–if they aren’t actual marbles, I’ll eat my keyboard–that are tied to various elements such as water, fire, lightning, and so on. Each monster you encounter has a specific weakness to one of these elements, and it’s up to you to help Dam choose which Magiball to use. Incorrect choices lose you gummy bears which seem to serve as “lives,” and a correct choice yields in total defeat of your enemy. Occasionally, Roland will decide to intervene and will just merk the enemy for you.

The level of puzzle here isn’t terribly challenging, I must note. Before selecting the Magiball, Dam will experience a crystal vision that contains a clue as to which ball will be the best to use. Parsing the visions can be a bit difficult until you begin to understand the game’s particular brand of logic. For example, you might see a rubber duckie in a bath for an enemy weak against water. For lightning, you could see birds sitting on a powerline. As the game progresses, you’ll acquire more of these balls, meaning that the puzzles do become more complex as you go through the game. However, at no point can they really be said to be difficult. 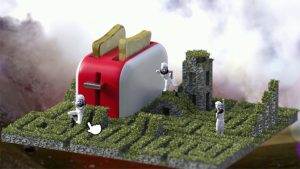 Dam will also acquire items, but you should realize you have no control over these. Rather, Dam will automatically use them when you speak to the appropriate NPC. Note, Dido will also give Dam items which can then be used in the next chapter of the adventure, which makes absolutely no sense. However, you just sort of have to go with it, and to be frank, if that’s the only thing you find overly weird about the game, that’s a minor issue.

The game has four “worlds” that you explore, and each world should take you about an hour, depending on how rapidly you read. I don’t really know that any of the choices you make affect the story, but you can unlock different dialog options, depending on your choices. All told, the game probably takes about four hours to complete. 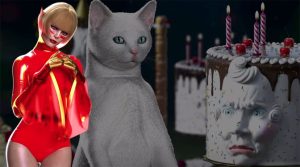 Visually, About an Elf very definitely develops its own aesthetic. The game isn’t graphics-intensive because the most rendering you get is when the characters run through various poses, depending upon the mood of the dialog. I did find the weird pulsing effect employed in some of the backgrounds to be annoying, and I would imagine that anyone prone to visually-induced seizures should probably avoid this game.

About an Elf relies primarily on the soundtrack to create and maintain the atmosphere, and the tunes range from the exceptionally weird to the catchy, with a heavy emphasis on the catchy. Nothing really stands out in terms of the music, but neither does the music detract from the overall gameplay experience. 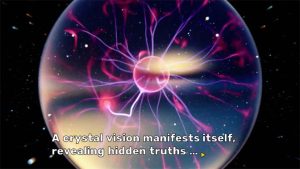 As a visual novel, however, About an Elf lives or dies by the writing, and while there are flashes of really interesting issues steeped in loss of purpose and other existential crises, the humor just feels juvenile. However, if that’s your bag, then you might really want to consider giving the game a try. 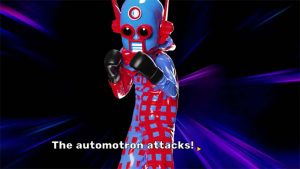 About an Elf is a surreal experience, no matter how you slice it. There’s some violence, but the game’s treatment of adult themes probably warrants more of a second look by parents than anything else. The gameplay is almost laughably simple, so you don’t have to worry about skill loss if you happen to put the game down for a bit. I even advise putting it down because each world plays out nearly identically to the one before it, making About an Elf incredibly repetitive. This is a game that has a very, very niche audience. If you happen to be in that audience, you’ll be overjoyed. If not, well, you might want to look elsewhere.

About an Elf retails for roughly $12.00 on the Nintendo store.