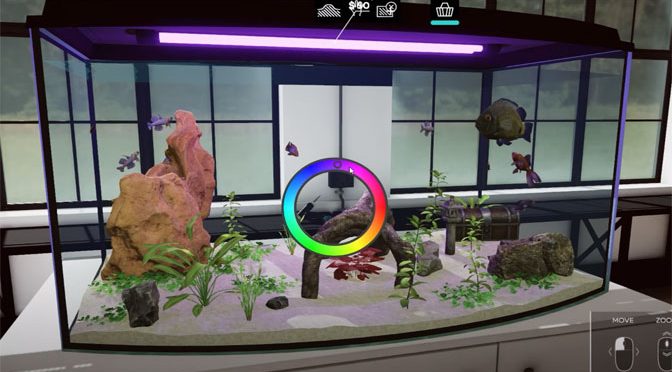 Look, I get it. I’m not ringing in 2022 with a bang here, but hear me out. 2021 in many ways has been as difficult a year as 2020 was, and for me personally, it was entirely worse. That’s perhaps why I’m choosing to welcome in the new year with a low-impact, stress-free fish tank simulator, and I have exactly zero shame about that. Aquarium Designer lets you design and construct virtual aquariums without ever having to do a water change, handle an algal bloom, or worry about bioload. In some ways that makes your designed aquarium the ideal fishkeeping experience. Regardless of whatever interest you have in actually owning an aquarium, you should give Aquarium Designer a try if only to enjoy the waves of peacefulness that will wash over you while you watch your digital fish.

This may come as a shock to you, but Aquarium Designer features a campaign mode, and I have to admit, I wasn’t anticipating enjoying it as much as I have. Could there be more involved in the campaign mode? Sure, but what the campaign mode does well is introduce you to the concepts of design rather neatly. One of the early quests involves designing an aquarium to resemble a child’s drawing, and it proved a touch more challenging than I’d originally anticipated. The game’s real thrill occurs when you move into the more sandbox-style game and design aquariums to your own specifications. I’ll admit that I’m a sucker for being able to design the tank of my dreams while still living in a house that barely sustains the three fish tanks I have. You have two options in the My Aquariums mode—realistic and casual. Realistic mode requires you to check back in with your tanks regularly, monitoring the health of your fish as well as the water parameters in your tank. If you do choose to sink an hour or so into the campaign mode, you’ll find yourself adjusting the water’s pH and temperature levels, and those skills will serve you well when you are finally released to design your own aquascapes. You’ll also have to watch out to be sure that you avoid placing conflicting species in a tank together. 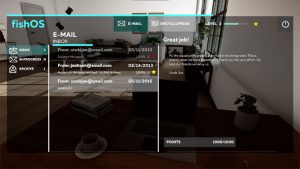 In real life, you probably shouldn’t put an Endler’s guppy in the same community tank with a tiger barb because the guppy’s tail will attract the barb’s attention. Tiger barbs are known fin-nippers. Aquarium Designer incorporates some elements of real-life experience here, but the game is far more permissive than the actual fish would be, which fits with the more stylized game experience. That said, the sandbox mode comes in two forms: casual and realistic. Casual allows you to design your aquarium with very few restrictions. In fact, I think the only real limitation you’ll face is from the fish themselves. You aren’t going to be able to have a school of male crown-tail bettas, for example. You can certainly compromise by overstocking your aquarium with zero repercussions.

Realistic mode offers more challenge. Your tank will be prone to some of the issues familiar to fishkeepers the world over, including algae, shifting water parameters, and generally keeping your fish alive. You’ll be required to feed your fish, and the game tracks real time. Therefore, if you’re gone for a good while, then you can expect to come back to find one or more of your finned friends floating at the top due to starvation. That’s a bit too much reality for me, thanks. 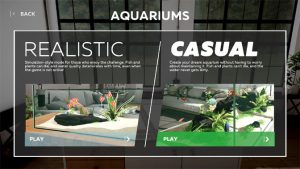 Aquarium Designer is still fairly limited in terms of its offerings. You don’t have the option to add any shrimp or other invertebrates to your tanks, which is a real shame because shrimp are some of the most entertaining creatures you can toss in a tank. The game also doesn’t allow you to create true carpets as each plant occupies a particular section, and you can’t get them to overlap. I do generally appreciate the attention paid to rendering the plants you can add to your aquarium, but you can’t really layer anything at this stage, which is distracting. Anubias species tend to prefer being tied to rocks rather than planted directly into the substrate because they produce rhizomes. If you bury the rhizome, it will start to rot and will kill the plant. I would have liked to have been able to manipulate those types of plants in a more realistic way in my aquascaping. 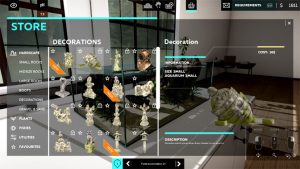 The varieties of fish available to you is a touch limited as well. The game could really use more nano fish like your smaller rasboras. As I mentioned above, the game doesn’t penalize overstocking whereas in real life, doing so will result in plenty of dead fish. Neither do you have to worry about fish growth. Some species, such as goldfish or loaches, can get to be quite large, so you really shouldn’t put them in tanks that are too small as that will restrict their growth at the cost of their health. In that sense, not even realistic mode prepares you for the reality of fishkeeping, so don’t go thinking that this game will be a good primer for taking care of a real aquarium.

As far as stability goes, I experienced a few freezes, necessitating a program restart or two. Admittedly, my computer is on the older side, which I prefer to think of as aging gracefully. Still, Aquarium Designer shouldn’t tax my system that much. Your mileage may vary, but I found it frustrating. Even considering the detailed renderings of the fish, my system specs should be more than up to the task of handling the game. All of that said, Aquarium Designer holds a great deal of promise. While the campaign mode could be more well developed, the game truly shines when you’re released to design and build your own tanks from scratch. If you’re playing the game to relax, you should probably opt for casual mode since you don’t want to have to bother with some of the more irritating issues to which tanks can fall prey. If you’re looking for a more intensive experience, then realistic mode might appeal to you. Just be aware that as in real life, your water parameters will shift while you aren’t actively playing the game. For me, I appreciated the game for providing me a low-stakes creative outlet, which is exactly the kind of tranquility I hope to carry with me into 2022. If you purchase the game on Steam before January 5th, you can buy it for less than you’d spend on appetizers at a New Year’s party. The price until then is $7.99, so if you’re interested, you should go ahead and snap up the deal. Here is a link to the Steam page if you are interested.