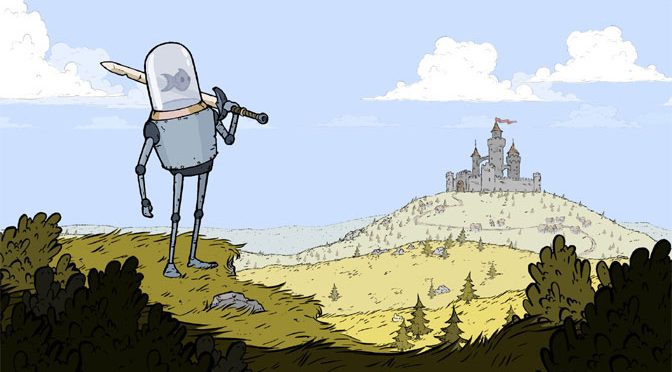 Good Morning gamer fans! It’s another glorious Saturday filled with adventure, action and a really weird storyline. Let’s give a round of applause to Feudal Robot! Honestly, I think this is the most interesting game I’ve ever seen story wise. You have sentient robots that live in Medieval times. 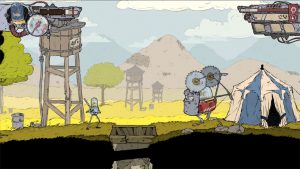 Our story unfolds with a young robot named Attu who farms oil. Attu has a home for retired robots. All of which tell him their amazing stories about how they fought in wars and had amazing quests! Attu had always wanted to go and serve his people like the other robots did. But as things turn out the young robot always had things to deal with and never had a chance to go. While there is nothing wrong with that, it bothers our hero and he really wants the chance to prove himself one day.

That day comes when a nasty gang of robots decide to steal all the oil and other precious items from the locals in his village. Can’t take care of the elderly if all the oil is gone, right? So what does Attu do? He borrows a rusty sword and chases after the punks that’s what! Thus begins Attu’s crazy journey. 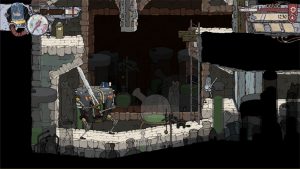 Feudal Alloy is played with you swinging and smashing your sword around. Your goal is to find oil for yourself so you can get to the bandits. Like any 2D platformer, there are hidden places all over the levels. And like Jet Cave Adventure, in some places you can’t get away from danger, so you have to take it head on. For example, you’ll have to climb up a ladder in the first level, and there’s an electric wire that’s already lit with sparks waiting to shock you. You get shocked, but after you pass through it, you can find some oil and drink it to heal back up.

There’s also something else you need to watch out for. You can’t go swinging your sword all willy-nilly. You have to watch your heat meter? You will overheat if you swing too much. So be careful and save your energy. 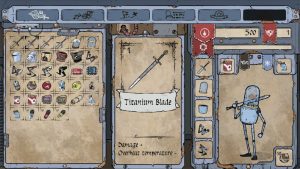 Feudal Alloy is probably one of the funniest games I’ve ever played. I do have a thing for the feudal times. The fact there’s a robot makes it cool. The art and animation is so smooth. The physics are pretty natural and everything about the character design reminds me of Mastermind and his fish robot companion.

In short, Feudal Alloy is pretty awesome. The fact that it has a robot instead of a person playing makes it super kid-friendly allowing everyone to be able to play it. Adults who love sci-fi and feudal times will love it too. This game is only a few bucks but worth every penny. It brings me back to the good ole days. That’s all for now, Modern Gamer out! 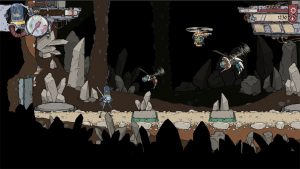 One last thing guys. We are now live every Monday at 8 pm eastern time on Twitch! Yes, that’s right folks, Modern Gamer now has her own show with GiN! On the show yours truly will be going over a new game each week for an hour. So click the link, give us a like and subscribe so you never miss a night! We are already streaming some amazing games, with many more in the pipeline. I can’t wait to see you there!