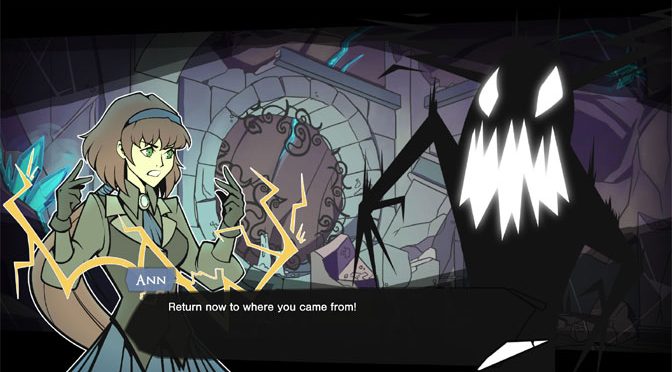 Arcadia Fallen is a visual novel, which means it’s basically an RPG without combat, as far as I can tell. While initially, I was skeptical, I came to love Arcadia Fallen’s story and worldbuilding. If you’re looking for a complex storyline that relies on you making choices to determine the outcome, then, maybe check out The Witcher 3: Wild Hunt.

If, however you’re looking for something a touch more straightforward that you can play on your lunch break, Arcadia Fallen might be for you. 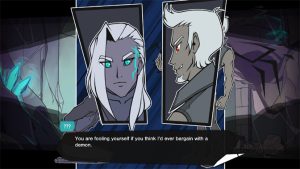 Arcadia Fallen places players in the sword-and-sorcery world of the Empire, and you begin as Morgan, an apprentice alchemist located in Anemone Valley—no, the name doesn’t make sense to me either. However, Morgan becomes bonded with a spirit companion named Mime, and more importantly, between Morgan and Mime, they possess the only means to eject demons from the world of the Empire. However, they must discover why the demons have begun infesting their world and in so doing save not only Anemone Valley but also the Empire. 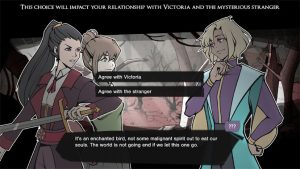 Along the way, players collect the usual crowd of companions including a knight, two mages, and a strange Outlander. The knight, Victoria, begins by seeking to monitor Mime with some suspicion. The two mages, Ann and Michael, come from two entirely different approaches to magic, and the Outlander, Kaidan, also has magic that causes his emotions to become readily observable in the form of glowing marks that appear and disappear based on Kaidan’s emotional state.

Morgan encounters a wide array of other characters as well, including Quinn yet another mage who forms a mentorship bond with Kim. Note, Kim and Kim’s older brother Ronan become integrally involved with the story and how Morgan progresses through it. 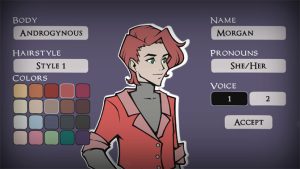 Arcadia Fallen possesses a shockingly well developed and detailed character creation process. Your character simply starts as “Morgan.” You can rename them, select between body types, choose between two voices, and even select from a gender menu that offers neutral pronouns. The game encourages the player to identify with the character they create. This isn’t a question of, say, a player playing Geralt and making Geralt’s decisions in the Witcher. Arcadia Fallen wants the player to make their decisions in the Empire. That said, there are choices that tend to matter a bit more than others, and the game highlights explicitly which choices those are, which is a feature that I quite liked. 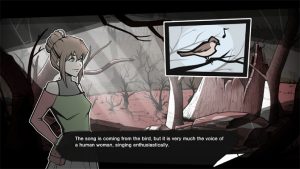 The decisions decided lead to a particular outcome as Arcadia Fallen very much is a visual novel. Players can therefore make no wrong choices. What these choices do impact is how the character proceeds through the story. The player determines the type of narrative the game becomes, and that narrative can change the entire experience. Sure, we’re all going to hit the same events, but as to how we feel about it, that’s determined by the narrative we choose. There’s quite possibly a metaphor for life in the game there. 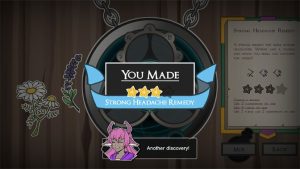 Arcadia Fallen doesn’t have combat as such. Rather, Morgan solves radial puzzles to create useful potions that will affect the outcome of one of the scripted encounters. Most of these puzzles trend toward the straightforward, and while some players might find the easy annoying, I found it in keeping with the overall experience. These puzzles represent a break from the standard visual novel formula: select location on map, have encounter, choose response, and move on. The break is welcome, but the puzzles do not become so frustrating that one feels bogged down by them. 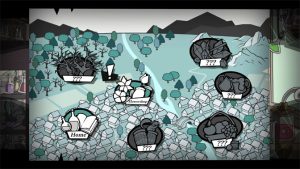 The story does remain fairly strongly set in Anemone Valley, despite hints at a much larger world beyond the valley. The two mages that accompany the player come from vastly different backgrounds. One learned magic at an auspicious university while the other learned on their own. While the tension between the two reveals interesting things about the Empire’s political machinations, that’s generally of less interest to Morgan than, say, what’s going on with Morgan’s neighbors in the village. 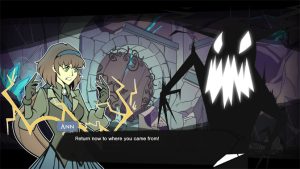 Visually, Arcadia Fallen uses an anime-inspired line-art design that I found nice. The white outlines around the characters afford a decent contrast with the background. There’s no real depth of field, which is fairly typical, so the white outlines create enough contrast to keep the characters clearly demarcated. The game uses color-coding and labels to indicate the tone employed for a given statement, which is nice, as it makes everything clearer. 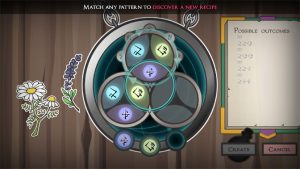 Arcadia Fallen started out life on Kickstarter, and the voice acting was a stretch goal that got met. The cast is comprised of seasoned veterans, and it shows. However, the game includes an odd mixture of voiced and unvoiced lines, so while the voice acting is stellar, there’s just not enough of it. Moreover, you don’t quite know when it’s coming. Moreover, the split between voiced and unvoiced lines means that sometimes the sequences don’t land the same way, which in a visual novel is far from ideal.

Story-wise Arcadia Fallen doesn’t really cover new ground, and there are significant portions where the story seems to drag on forever. The game is only ten-ish hours long, so those lag periods don’t constitute a deal-breaker though they are jarring. 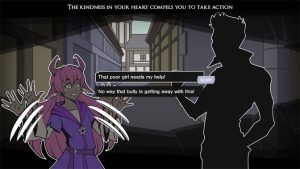 Arcadia Fallen is a great game if what you’re looking for is something relatively lightweight and positive that doesn’t require a great deal of energy investment from you. It is a true visual novel in that player choices matter, the story remains more or less the same. It’s only the experience that changes. What puzzles there are straightforward and fun, but again, they’re the sort of thing that you can do while listening for children in the background.

The game offers solid representation for members of the LGBTQ+ community in that there are non-binary and gay characters that are fully integrated into the story. These relationships are treated with the same respect that the game affords heterosexual relationships. Players can also add in that aspect of their identities, albeit in a limited way.

Overall, Arcadia Fallen is a great way to spend a few evenings, and I really enjoyed my time there.