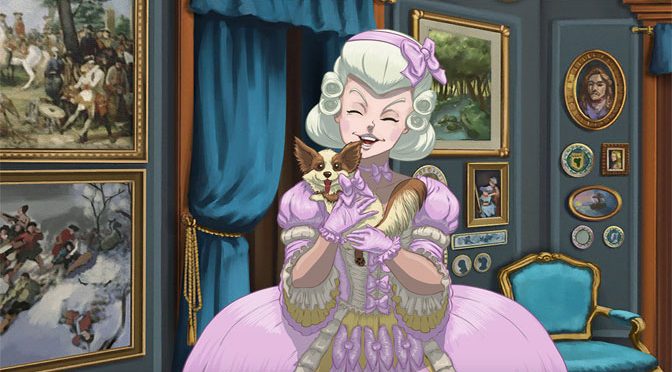 Ambition: A Minuet in Power

I have to confess that “Ambition: A Minuet in Power” is actually my first dating sim style game, so I was not at all certain that it would be something I’d enjoy playing. Fortunately for me, the gamble paid off in spades as I found it to be a delightfully snarky romp through pre-Revolution Paris.

The game is ridiculous but in all the best of ways, from the over-the-top imagery to the hilariously entertaining writing. While the game clearly does not expect you to take it seriously, the choices you make have real in-game consequences, giving gameplay a deliciously serious feel perfectly in keeping with the game’s intended atmosphere. 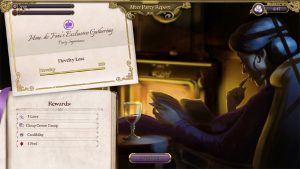 In “Ambition: A Minuet in Power,” you play Yvette Decaux, a young woman who has come to Paris to live with her fiancé, Armand, the Baron de Marbo, in March of 1789. Upon arrival, Yvette finds no sign of her fiancé, so you, as the player, must locate Armand by navigating a Paris teeming with tension and ramping up toward the Revolution, which more or less kicks off with the storming of the Bastille on July 14th. The way you do this is by attending parties and speaking with the correct people in order to obtain gossip which you can later sell for income or use to influence public opinion in support of or against the named factions. However, these parties are not without their peril as saying the wrong thing to the wrong person can either damage your reputation or worse send you to the guillotine. 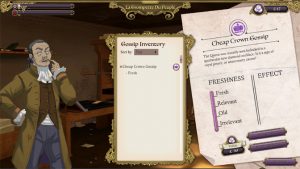 From my initial impressions, the two primary stats of which you keep track are credibility and peril. You spend credibility to overcome challenges that eventually either lead to increased favor with various characters, which you will use later to date them, or to a greater opportunity to gain gossip. Gossip in the beginning serves as your primary source of income, but as you move through the game, you can and should begin to use the “peddle influence” option in order to balance the political intrigue aspect of the game. 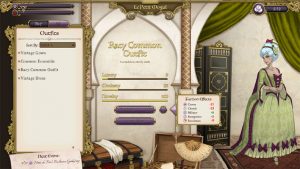 Because this is Paris, your wardrobe also has significant bearing on your ability to achieve positive outcomes for these various events. Each outfit selection carries stat bonuses or penalties, so selecting the correct outfit for the correct event is key. The game also has a durability mechanic, which it terms novelty, so you do have to purchase new outfits as you go along. You should definitely keep in mind to include the weight of your purse, considering that you will have to pay rent and your maid’s wages. Failing to pay either of those values will result in a loss of credibility, impeding your ability to achieve your objectives. 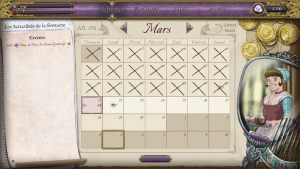 The game functions like every familiar turn-based game you’ve ever played. You select events from a calendar, and on free days, you have the option to explore Paris, experience an Incident, or rest. Pay attention to your exhaustion levels because exhaustion also provides a penalty to credibility. During parties, you have the option of selecting a conversation from among various choices, and in the early stages, you only have two interactions per party, meaning you have to be selective. Your selections may or may not foreclose other options, based on the decision tree you choose. 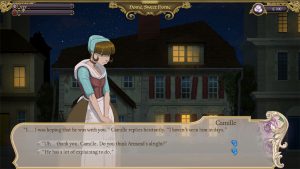 During these interactions, you have a menu of set responses from which you choose. Successful completion of options marked with a credibility check depend on your credibility stat, and hovering over the check marker will let you know the severity of the check. Failing the credibility check can yield a decision tree that results in increased peril. Options marked with peril do pose peril, though you can theoretically talk your way out of increasing your peril, but you’ll have to be careful in your choices.

The art-style trends toward anime, so you’ll know your villains automatically. While the characters are not animated per se, your interlocutor’s expression will shift to suit their reaction to you, and frankly, some of those faces are worth seeing at least once. There’s nothing like being glared at by a barmaid while upbeat harpsichord music plays in the background. 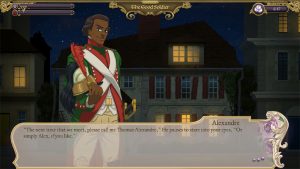 The gameplay in “Ambition: A Minuet in Power” is very familiar, so the game’s real appeal lies in the details. As I mentioned above, the writing is engaging, allowing Yvette to throw shade where necessary and almost but not quite break the fourth wall. There’s also enough mystery to keep the game feeling fresh as there’s always a new bit of skullduggery to do that might reveal more about your hated enemies. I also appreciated that the game takes the time to design era-appropriate outfits and also throws in bits of grammatically correct French, which my inner French-major adores. Add to that the occasional “historical events” that change the balance of power by the factions, and you get a pretty solid game. 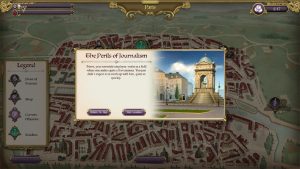 While I would never have thought to try “Ambition: A Minuet in Power” if I didn’t write this column, I’m glad I did. While I don’t know that I would necessarily play it to the exclusion of sleep, I can say that I enjoyed trying to keep Yvette from going under the guillotine very much. I realize that I have not mentioned much about the actual dating part of the dating sim, and that’s mostly because I found that it interested me less than the rest of the gameplay in “Ambition: A Minuet in Power.” Yes, currying favor with various lovers is a key game element, but really, I found it to be more of a mechanic than an actual story interest. That said, according to the game’s Kickstarter, the world generated for the game is different for each playthrough, so my opinion may depend on my experience with this setup. I’d say it’s worth a try if it even remotely appeals to you. However, your mileage may vary. 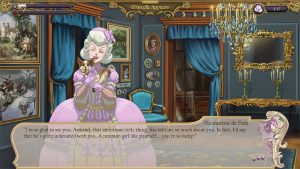