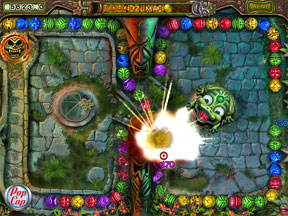 I am a frog. I appear to be made of bronze. I am a bronze-age frog. I have an apparently irrational desire to frustrate the lives of Meso-American gods. I am filled with virtue. I am the center point of Popcap’s new game, Zuma’s Revenge.

OK, so none of that’s true. I’m a middle-aged father of two who loves playing Zuma’s Revenge. Once again I am spitting colored, scared-looking balls at other balls which then explode when certain patterns are met and I get to advance in levels and difficulty across a variety of environments. This is a great casual game and filled my hours with both entertainment and challenge.

Like its predecessor, Zuma, the premise of the new title from Popcap is simple: remove all the rolling balls in play before they reach an endpoint. If you don’t a life is lost and you have to try again. The trick, as always, is in the details.

The constant roll of the balls places time pressure on the player and the constant mix of available powerups can change the gameplay significantly many times through each level. It can be confusing for the inexperienced. But learning how to use the powerups efficiently is the biggest step in succeeding in the game.

Don’t get me wrong, though. Zuma’s Revenge isn’t a walk in the park. The last five or so levels in particular were fiendishly difficult for me to defeat. Not so hard that it was impossible, but it took determination and effort to do so. The challenge was worth it and I’m now at the point where I’m playing the game through again on a more difficult mode to continue to stretch my skills.

Many companies would have been behind a sequel that was just a knock off of the previous games success. While there’s a lot of the familiar in Zuma’s Revenge there are large changes in some gameplay that make a player who had mastered the earlier Zuma to have to think about new approaches and strategies in how they approach the game.

It’s worth the price of the game just to see the advances. In particular I found the inclusion of ‘boss’ levels to be a worthwhile addition.

Popcap has always known how to produce a great casual-gaming experience and Zuma’s Revenge is no different. This is a worthy successor to the original and fine next step in Popcap’s ability to demolish productivity in the workplace.

It’s clear to me at this point that without Popcap’s ability to distract we’d have flying cars and colonies on Mars by now. I’m the Publisher of gameindustry.com and I find MYSELF so distracted by their games that I encourage my staff to play them so we can talk about them.

In short, Zuma’s Revenge is a game on the cutting edge of casual gaming. It’s a worthy successor to the history of such games in the arcades of my youth. I could easily see myself, twenty years ago, passing up Pac-Man or Asteroids to play Zuma’s Revenge.