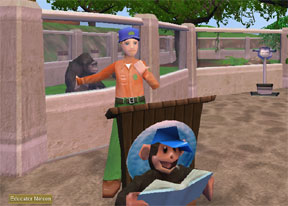 And what’s next is one of the best sequels to come along in years, Zoo Tycoon 2. A swift and sweet mix of what made Zoo Tycoon a great sim with added features that makes me jump like a wild buffalo is what you will find inside!

Honestly, if you liked the original Zoo Tycoon you’ll like ZT2 even more. It’s got all the fun (and chaos) that I enjoyed in the first one. And it’s improved the graphics and audio immensely. It’s truly an immersive experience.

And that’s what we’re after in there sims, isn’t it? The feeling that we’re actually there and doing the things we’re simulating. And Zoo Tycoon 2 delivers in spades. This is a spectacular simulation"all the way down to the animal poop. Blue Fang and Microsoft have gone a long way to delivering the joy of running a zoo to your desktop.

And the graphics! Whoa nelly, the graphics. You’re no longer restricted to the + angle overhead shot of the original. Now the game let’s you have a ‘tourist cam’ level view where you can actually wander around the zoo as if you were a tourist or keeper and see things from the ground level.

This goes a long way to enhancing the feeling of interacting with the animals and helps promote the feeling of being there in the game. Also, the photo system, wherein you can take photos of your animals and exhibits as if you were a zoo guest, is a great idea. I can see tons of photos being posted on web sites around the world as players brag on their zoos.

It’s easy to just be carried away with the pictures and sounds, sure. But what truly impresses me about the game is the astonishing level of detail and research that went into it. There’s what feels like an entire animal encyclopedia in the game in addition to all the animals and such.

Not only can you place tigers but you can also learn about what sort of enclosures they like and WHY they like them. And that information can be immensely helpful if your goal is happy animals entertaining happy guests. Zoo Tycoon 2 would be poorer without the back story available through this extra information.

The economics of zoo management are still there, as well, for those who like to manage their zoos as commercial enterprises. Tickets, fundraisers, food and drink, souvenirs as well as staffing and salaries all play a large role in the success of failure of your zoo. So it’s not all a walk in the park (HA!).

In all, a more than worthy successor to ZT. The developers got this one right. They took what made Zoo Tycoon special and enhanced that while adding enough new and interesting features to ensure that it didn’t appear to simply be an expansion of the first game.

A great effort that gets 5 GiN Gems from this reviewer.

I think I’ll take the kids to the zoo this weekend.