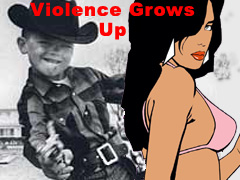 I am so glad you asked dear readers.

Well, I went into a Cluckin' Chicken and accidentally bumped into a guy in line who said something rude to me. So I pulled out a pool stick I just happened to have in my pocket and beat the tar out of him. Then when a lady yelled at me to mind my manners, I pulled out a machine gun and proceeded to mow down just about everyone in the place, except the poor guy serving food in the chicken suit. His life is hard enough without any grief from me.

So it was an interesting day to say the least.

But of course before you start accusing me of being a whacko shooter running amok in southern Georgia, know that I was playing a computer game. In this case it was Grand Theft Auto: San Andreas, a game I enjoy because I get to play a bad guy. Not an unlikable bad guy, but really, he's a bad guy.

Playing the bad guy however is not what lines up parental and religious groups against games like GTA however. It's the violence.

Basically, the theory is that if you play games like GTA, especially if you are a young kid, then you are doomed to go out in the world and commit the same acts. Whenever anybody commits any violent act, they go into their past to see if they have ever played a computer game and use that to support their arguments. I remember covering the Senate hearings for GiN after those kids at Columbine High School shot up the place before taking their own lives. A senator from Texas held up a copy of the original Doom and said that the game was found on their computer and that a Constitutional fight was brewing to restrict violent games.

At the time Doom was a very old game and I remember thinking that if they were still playing Doom, that they probably weren't really hardcore gamers. But anyway, the facts never get in the way of a good story with some people. And really, this was just one more log on the already brightly burning fire.

That same year E3 was pretty much a joke. Companies were afraid to show any game with even a hint of violence. Members of many conservative groups roamed the halls cataloging each instance of violence they found. Even Conker's Bad Fur Day was shown behind closed doors, and that was a game about a squirrel with a bad mouth.

The world has not gotten too much better, although now the thought police that are currently running the nation have shifted their efforts to attack sex and violence. Nicollette Sheridan exposes her back in a superbowl commercial and suddenly it's the Watergate scandal or something.

So it was with great joy that I found a new book called Savage Pastimes by Harold Schechter. The book is the first coherent item I have found that says "The Emperor Has No Clothes!" Basically, the point he makes in the book is that society has always loved violence and sex, and we are none the worse for it.

Besides the obvious items like ancient Rome and their bloody past, he shows many other violent activities that have found their way into our culture, and even the culture of children. Violent things like reading. Have you ever actually read Grimm's Fairy Tales? They are most twisted, sadistic and murderous tales probably ever written for kids. Yet generations of young people grew up reading them and society did not collapse.

Also Itchy and Scratchy from The Simpsons is based on Punch and Judy puppet shows, which featured all manner of murderous rages as the puppets dismembered and killed each other.

Plus, the television of the 1950's, the supposed wholesome era of TV featured mostly westerns where hundreds of Indians were slaughtered. How many kids who are now running the world's largest companies spent their youth running around gunning down their friends and a whole host of imaginary foes as they defended their backyard forts?

The book points out that overall violent crimes are trending downward, even as computer games "keep getting cooler." Moralists and censors he writes are getting angrier and hotter, but society is really in no danger. Savage Pastimes is a great read for anyone who wants a better understanding of where violence fits into our society.

No matter how you slice it, humans are violent animals with a code of conduct that prevents us from acting on those impulses. But we need a release for those inborn hostilities whether it is a violent sport, an action packed movie, a scandalous book or an engaging computer game. And no matter how hard I pound on those people in GTA, they don't feel a thing.

In the real world, when I bump someone I simply say "excuse me." So I think I should turn out ok despite years of violent gameplay. And after reading Savage Pastimes, I think society will be ok too, just like it always has.

So to the game industry I say, stop rolling over and taking it when self-appointed moralists say we are evil. Put your violent games up front and make no apologies. If it's a good game it will sell, and you won't be the downfall of the world for it.