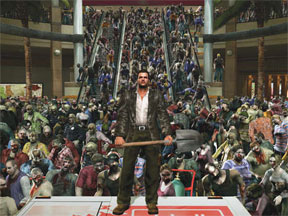 Capcom’s Dead Rising does not want to be compared with the works of George A. Romero, specifically Dawn of the Dead. In fact, right on the front of the package, a disclaimer claims it was not developed, approved, or licensed by the owners or creators of Romero’s zombie masterpiece. Of course it is easy to compare the two titles, both of which involve a mall setting overcome with zombies.

In Dead Rising’s case, the game centers around Frank West, a freelance photographer who is investigating a mysterious outbreak in the small town of Willamette, Colorado. The town is quiet, a little too quiet in fact, until Frank and his helicopter pilot locate a shopping mall that is surrounded by someone, or something for that matter.

Frank is dropped off at the mall’s roof, and is told by the helicopter pilot that he will be picked up in exactly 72 hours. During that time, Frank must find out why the town is overrun by zombies, get the full scoop on the story, and survive the assault.

Along the way he will meet various survivors, some get killed right at the start of the invasion, some offer help, while others have gone completely psychotic and are perhaps even more dangerous than the zombies themselves.
Of course to fend off this zombie onslaught, Frank needs to arm himself. As the packaging says, anything and everything is a weapon, and that is pretty accurate, while simple weapons such as lead pipes and 2×4 wood blocks are available, there are also more innovative weapons to pick up.

Some of my personal favorites include a set of hedge clippers, perfect for slicing zombies completely in half, the lawn mower, which runs over hapless zombies and turns them into mulch, a sickle, which when jammed into a zombie’s neck, can easily pull their heads off and the ultimate zombie killer, the excavator. When drilled into one zombie’s gut, it spins him around and can be used to kill other zombies until the original’s body parts are completely destroyed. Obviously there are the standard zombie killing firearms as well (pistols, shotguns, and machine guns,) but the unique weapons help give Dead Rising its humor.

That humor can also be found in some of the dialogue that is presented in the game. Unlike the serious tones found in the Resident Evil series, Dead Rising fully parodies all zombie movies with interesting characters, especially the psychotics.

Some perfect examples include a supermarket manager who defends his store with a "shopping cart of doom" consisting of kitchen knifes and a pitchfork, a cult leader whose weapon is a devastating ceremonial sword, and a crazed clown armed with a set of mini-chainsaws. Also, each of the survivors have their own unique missions, in addition to escorting them back to the security room (your base of operations.)

The only problem with the escort missions is that you are running under a strict time schedule, which also affects the main storyline. If anything in the main storyline is missed, then Frank will not be able to unlock the mystery, and will not get the best possible ending. In addition, escorting survivors can be very tedious and frustrating because their AI is not the best. Sometimes I have a survivor still standing in place even after I direct him/her to follow me, or they will do whatever it takes to intentionally be attacked.

Another frustrating factor that comes into play is the save game system. Only one save game per 360 is allowed, and saves can only be accessed at the security room or in bathrooms. Even worse, when Frank is killed there are two options: to load a previous save or to save Frank’s status. But if you save his status, that erases the current game, and despite having a higher level character, you still have to start from the beginning! In addition, missing any cases will require a restart to find out the true story. I don’t know if this was Capcom’s intention to provide repeated plays, but for many it can be quite a pain.

Visually the game impresses. Characters are highly defined, and the zombies have enough variation that it doesn’t feel like your fighting the same one over and over. The game even squeezes so many zombies on screen at the same time that it is quite an impressive feat. State of Emergency was impressive with its large crowds, but Dead Rising blows it away.

But nothing blows me away more on Dead Rising than the sound work in the game. Smashing a zombie’s head in with a sledgehammer never sounded any better, and despite being based on cheesy zombie B-movies, the voice acting is quite good. Gone is the horrible voice acting of the original Resident Evil.

In addition to the main 72 hour mode, there is also an overtime mode which continues the story after the helicopter comes to get Frank, and an infinite mode, which is more of a survival mode, to see how long Frank can survive the onslaught.

Dead Rising is fun in terms of going on a rampage against an endless swarm of zombies. The variety of weapons keeps the game from being repetitive. However, the limited save system and the frustrating escort missions brings the game down from classic status. But for zombie fans, or fans of survival horror in general, then Dead Rising might be for you.