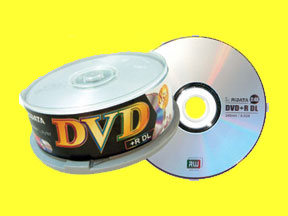 For some reason, it seems to happen more often with role-playing games than anything else. I want to transfer my saved game files from my desktop to my laptop to take on the road with me, but the directory with the save data is over 800 megabytes once all the character, map, item and actual save files are added up. Probably because RPGs have to track all the changes that a player makes to the world, plus changes in the characters themselves, these file folders tend to be a bit large, whereas a shooter game might only need to record a few things like player health and current position.

I had been keeping my save files on a key drive, but this quickly got overloaded, even after I removed everything else from it other than my game files. Plus, my one gigabyte key drive cost me several hundred dollars, and the read and write times are extremely slow.

When my editor dropped a stack of RIDATA Double Layer DVD+R and DVD-Rs from Advanced Media on my desk, I was intrigued. If these things worked, I would be all set, because I could burn my files to the writable DVDs. With an incredible 8.5 gigabytes of space on each disc, there would be no space issues.

They actually worked much better than I had hoped. I tested the discs on a variety of test systems, and anything running Windows XP with a writable DVD drive is going to recognize when you have inserted the media and will let you easily burn files. The Advanced Media double-layer disc has been certified to be in compliance with the DVD+R Alliance, which is no surprise considering that parent company RITEK is a member. Additionally, the new storage medium has been quality tested by a variety of burner manufacturers and software developers, all of whom have given it their stamp of approval. On all the drives we tested, it worked fine.

Having 8.5G of storage spinning in my drive is pretty incredible. In fact, it is almost like having an extra hard drive that I can remove and use elsewhere. Whenever it gets full, I just pop in a new disc and archive the old one.

I was most surprised by two things. First, there is no need to flip the disc to take advantage of both layers. And secondly, I was able to achieve a constant 8X speed when burning, even when the disc was mostly empty or practically full. The Advanced Media-developed technology allows material to be either read or recorded on one layer without affecting the other layer. When data is being recorded or read, it does so continuously from the first layer to the second without interruption. It’s much faster than working with my key drive, which is now freed up to store smaller files.

Oh, and the dye used in recording the RIDATA DVDs is organic based, for those concerned about the environment, which we all really should be.

Since I had a stack of these discs to play with, I decided to indulge in one of my other passions for my next road trip: watching video. There are a ton of sites out there that offer full (and legal) downloads of movies and programs. My favorite cable network, the Sci-Fi Channel, normally offers full downloads of shows the day after they have run on TV. And if you want to watch them on your cool wide-screen notebook while traveling, you need to get them off your desktop where they were downloaded. At least that is the situation I was in.

Again, the RIDATA DVDs came to the rescue. With all that space, it can store quite a bit of video. In fact, it will hold four hours of DVD-quality video or 16 hours of VHS-quality video. I loaded up some episodes of Battlestar Galactia and Stargate SG1 and was good to go.

The media is also perfect for those that like to listen to music. Doing the calculations, that 8.5G is going to get you over 120 hours of MP3 audio. On random play, it will be a long, long time before you probably hear a song repeat itself. That’s bigger than some radio station’s play lists.

The discs are also fairly economical. I found a 25 piece spindle on sale for about $75. They are definitely worth about $3 per disc. There are also 4X versions of the media available for about $50.

Thanks to RIDATA for solving my data problems. Now my level 25 barbarian/thief can continue his mission to become the scourge of the country, whether I am safe at home or out on the road.