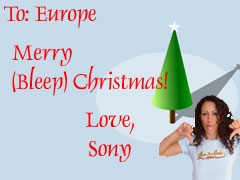 I thought I'd done enough Sony bashing to last a lifetime, and I could tell you were all beginning to wonder if it was an obsession. I was ready to move on dear play chums. I really was. There were more pressing issues that needed my attention more so than moaning about the price of the PS3 and then begrudgingly and quietly pre-ordering one anyway. But now, in its ultimate wisdom and kindness, Sony has decided to save me the anguish by just not releasing the PlayStation 3 in Europe at all this year.

Yes, you did hear/read me correctly. This week's Sony bombshell is that the PS3 isn't coming out in Europe until March 2007. Well, thanks a-bloody-lot! Utterly speechless doesn't really cover it. What happened to all the blustering about a worldwide release?

And how many months have we had to endure Sony's constant bitching about the other two console manufacturers. And now! And now it's all come to naught!

Personally, I've always been more excited about the Wii and the only thing tempting me towards PS3 was Heavenly Sword, which I doubt is worth over Â£400. So my initial thought on hearing the news was, "cool, Wii could actually gain some ground this Christmas," which can only be good for fun gaming. Well, okay so first I thought, "Oh my f***ing god!"

It's got to be a bitter blow for the Sony camp and everyone's trying to be all sensitive and diplomatic, but it's hard to do that over the sound of whooping, party blowers and yee-hawing at Nintendo and Microsoft.

Parents all over the UK will be breathing a sigh of relief. Oh dear, looks like Marvel Top Trumps 4 for little Johnny this year – shame.

Don't think you've got away unscathed, safely sitting in the US because there are only 500,000 units going out on day one. And the US is only getting 400,000 on the day of release, with a measly 100,000 going to Sony's home territory, Japan. So to say PS3s are going to be scarce as hen's teeth is an understatement of biblical proportions.

Of course, Microsoft issued a statement and let's just say I think they'd been wallowing in a bath of smug shortly before-hand. The statement was issued with a bag of salt for Sony to rub into its already smarting wounds.

You could hear the wincing as things like this were said, "We know how challenging it is to pull off a global launch," (furrowed brow of understanding and muted tones of sincerity).

This was followed by, "so it's not surprising that Sony has backed away from their previously announced launch plan" (ouch)

""due to the unproven technology they are trying to pack into their console." (And a punch to the kidneys fells the beast)

And they just couldn't resist a little touch of smug, "Europe remains a priority for us and that is why gamers have been able to experience Xbox 360 from day one and we're confident we're going to have a great Christmas"" They might as well have said, "Ha, ha, screw you Sony!"

Nintendo as always has "no comment" to make and Sony's Kutaragi has offered a snivelling apology to Europe. As usual we're at the bottom of the heap and of course it won't make any difference to sales come March 2007, but it still stinks.

Sony's really dropped the ball on this one, letting 360 extend its lead even further. With an industry backlash already brewing, this is just the icing on the cake.

There's not really much more to say on the matter, except that I'm looking forward to a green Christmas with my 360.

Word on the street is Nintendo is announcing its release date next week, so let's just hope it's not more bad news.

Most Wanted: Gears of War