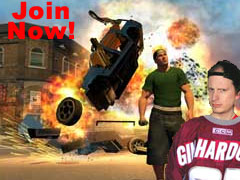 Usually I shy away from playing online. Unless it's a casual game like Uno or Texas Hold ’em, or even classic remakes like Frogger and Time Pilot, I seldom do multiplayer on Xbox Live.

Why you may ask? Because there are way too many cheaters out there. Ever get on Halo 2, respawn, and then immediately be shot by a camper? How about on Battlefield 2 when you try to get to a control point, only to be ambushed by someone who is able to control his unit so well it makes your player look like he's running in slow motion? What about the jerk who exploits all the key locations and will not let anyone else get to them? I have dealt with them in the past, and in doing so, I have backed out of multiplayer deathmatches.

However, one title, and in turn, one voice actor, is making me change my thoughts of playing online. The game: Saints Row, and the actor: Bubba "The Love Sponge" Clem.

For those who don't know who Bubba the Love Sponge is, he's a radio shock jock based out of Tampa, Florida known for his close friendship with wrestler Hulk Hogan and NASCAR champion Tony Stewart.

But he is also known for his share of controversy, including a $755,000 FCC fine, the largest single fine in the history of broadcasting. After the Janet Jackson "Nipplegate" incident, Bubba was fired from Clear Channel and was out of the radio business until October of last year, when Howard Stern announced that he would hire Bubba for a daily program on Howard 101. Needless to say I was interested in his style of radio, and after listening for a while, I was hooked.

In fact, I became a member of his Bubba Army, and a regular poster on his message board. His unique method of humor caught me by surprise, and I never looked back since. At times I even listened to him more than Stern himself.

But a month ago, he had a guest that took me by surprise. It was David Lawrence, writer and producer for Saints Row. During the interview, Bubba mentioned that he would play the role of one of the DJs on Saints Row. Considering how good the radios were in the GTA series, I was shocked and looked forward to hearing Bubba using his type of humor in Saints Row. I even started a thread on his message board about the release.

Last Tuesday, Saints Row came out, and since I knew it was going to offer online gangs, I figured why not make one in honor of Bubba, and even christen it the Bubba Army. A day after the game came out, I called into Bubba's show and told him about the Saints Row Army and even explained to him about the whole Xbox Live process. He even mentioned that the show received their own Xbox 360 and will be considering joining the Army as well, so I was shocked to hear that.

The shock didn't just end there. After I hung up, I turned on my Xbox 360, and all of a sudden there were hundreds of messages and friend requests from Bubba fans who wanted to join my online Army. Since then, I have been answering text and voice messages, inviting fans in for initiations, testing them out in deathmatchs, and inducting those who are deemed worthy. That has been going on for the last two days non stop.

Now Bubba, how about you and your staff get on and apply for an initiation? I would love to have you guys take out some of the other gangs of "pests" on Xbox Live.