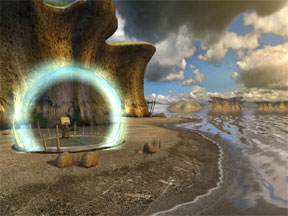 It is a rare privilege in this business when you actually get to witness first-hand the passing of an era.

When we first encountered the original Myst oh so long ago, we were transported to a world of beauty and wonder, where a mystery would unfold as puzzles were solved and passage to new but equally fantastic places was earned.

Following up on Myst, arguably the greatest game of all time, has had its ups and downs, but largely the series hasn’t disappointed. And now, attempting to fill these rather large shoes is Myst V: End of Ages. Fill them?! It’s more like what Bruce Banner does to shoes when he gets angry.

End of Ages is set sometime well after the rest of the series, when Yeesha, Atrus’ daughter (who was an infant in III, a child in IV and a young lady in URU), is well into middle age. We are treated to a journal entry dictated by Atrus, because we would settle for no less. Then, as usual for Myst, you start the game without any mission directives or specific instructions, and you must determine for yourself what is going on, and how you can help.

Without giving too much away, the story has a great deal to do with the Bahro, the Least to the D’ni people, that Yeesha mentioned throughout URU. Even without that reference, you soon learn how to interact with them, and to get them to help you on your quest.

The 3D environment in which you find yourself can be navigated three ways. First is the classic slide-show, where you click in the center to go forward, and to the left and right to turn around, like the original Myst and Riven. Second is what they call "Classic Plus," in which you click to move like a slide show, but you can rotate with the mouse, like the static bubble games of which Myst’s III and IV are examples. The third is a completely free, shooter-like movement, where you use the keys to move and the mouse to turn. You can freely switch from mode to mode throughout the game.

I personally found the free movement to be a little too free. Occasionally, because I wasn’t traversing a ‘path,’ I would miss a visual clue or something and have to back track. I found Classic Plus to be a good compromise between total freedom and making sure you see everything.

And you’ll want to be sure to see everything. The graphics are everything we’ve come to expect in a Myst series game, and then some. I have never gotten a greater feeling of awe and a sense of ‘hugeness’ from a 3D-modeled environment before. There is one world with a large ringed planetoid in the sky, and I would not be in the least bit surprised to find out that it is an actual 3D object placed in the distance and not something painted on the background. Stuff that happens later as you solve that world makes me certain of it.

Instead of interacting with live action actors that are digitally added to the landscape, Cyan made the decision to have 3D-modeled characters instead. These are very well made: they have natural movement, and their mouths move pretty much in sync with the voices. I would not have been happy with this change if they had not done it right; fortunately, they did.

As grand as the scenery is, the music is even better. From subtle background melodies to emotional crescendos, the orchestrations always fit the world you are in and the dramatic tempo of the dialogue. The music allows what is already a thing of beauty to transcend toward perfection.

The voice acting is top-notch. Rand Miller is always a treat as the voice of Atrus we hear at the beginning. The other actors are very good as well, giving their characters life and emotion such that you can’t help but feel something for them. They certainly make reading long journal entries more bearable, as each one is accompanied by the verbal dictation of the writer.

Sometimes the monologues are extensive, such that remembering important information from them can be difficult. Fortunately, you are given access to a book which contains the text of everything any of the characters say to you. I found this very convenient and referenced it many times throughout my game.

Like most Myst games of yore, at the end you are faced with a decision that must be based on, not information you have gathered or logical deduction, but what is right. If you listen to all of the characters’ speeches, it shouldn’t be hard to figure out what to do, but how to do it may be more difficult. But you should figure it out in the end.

This brings me to the one minor gripe I have for an otherwise perfect game – the way it saves your progress. It automatically saves your game like constantly, and if you quit you can continue where you left off. Sounds just fine, right? Well, most of the time it is, but in a Myst game, one of the attractions is to see all the possible endings, right or wrong. But, with no control over your save points, the only way to see an alternate ending is to go through the game again. Fortunately, with the knowledge you’ve gained from the first time around, you can take some shortcuts in order to upgrade this from unbearable to annoying, but it is still an inconvenience for the overly-curious among us.

Despite this flaw, Myst V: End of Ages is a triumph, a worthy successor, and a fitting end to the Myst series. It earns a full five Gems.

So, the obvious question gets begged, why is Myst ending? Well, the folks at Cyan want to start on other projects, and they felt that they could best do this with a clean slate. So they brought Myst to a conclusion at V (a very important number to the D’ni), and are now working on something top secret. They won’t be returning to Myst any time soon, but we can always hope.