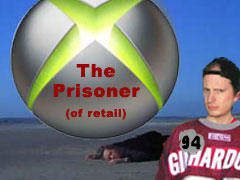 Moments like these prove the exact reason why I almost never preorder.

In the past, I have been screwed over many times by retailers when it comes to preorders. Most of the incidents I have encountered had to deal with the titles I'm waiting for not showing up the day they are released. While it will be the infamous "shipping date" excuse, there is always the rare "it was lost in transit" excuse, and as a result, I refuse to preorder software.

There are rare exceptions, of course, and none bigger than the launch of the Xbox 360. When I made my preorder back in August, I knew it was going to be after the launch. In fact, it was scheduled for the second shipment. A few weeks ago, I found out that my preorder was number 94 on the wait list, and on launch night, the store where I made the preorder was only getting 40.

Now keep in mind that I did not get word if this meant 40 Premium Packages (including the hard drive, HD cables, wireless controller, headset, and other goodies.) There could also be some Core Packages thrown into the mix. I wasn't really concerned at first, because I figured the wait might just be a week or two. In the meantime, I would have other titles to work on.

But this past Wednesday, the concern set in. On the way back to the store I made the reservation, I picked up both Madden 06 and Project Gotham Racing 3. All was fine after making the purchase, but then on the way home, I receive an automated phone call from said store, mentioning the possibility that I won't be receiving my Xbox 360 until after the holidays.

Thus, I am stuck with two titles I will not be able to play until after Christmas. I could always return them to the store but I know what will happen. If I try to purchase them after getting my 360, and they will be sold out. Same will go for Perfect Dark Zero, except maybe to a further extent.

Once again, just like with the PlayStation 2 launch, there is a mass shortage of systems. Gamespot's Rumor Control section analyzed the rumor that the shortages were intentional. As usual, Microsoft responded with their trademark reply: "Microsoft does not comment on rumors or speculation." What is the hidden translation? "Yes we are using a shortage to create pre-sales hype and force people to take extreme measures to buy our new system."

And what are these "extreme measures" I am talking about? Well for one, you could go to either Gamestop or EB online and be forced to purchase one of their extravagant bundles. In other words, spend as much as 10 TIMES the retail price for extra junk that no one wants. Gamestop even had the balls to force people to buy a plasma HDTV in order to get a 360, a total value of about $4,000!

Then of course, there's eBay. Compared to EB and Gamestop, the good news is the fact that it is possible to purchase a 360 without being forced to bundle. Still, the chances of getting one around the $400 retail price is low, especially when you add shipping to the mix.

Then of course, not every one on eBay is a respectable seller, and how can you be sure that you will receive your 360 in due time. Even worse, some people actually use an Xbox 360 listing to sell junk, such as domain names or instructions of how to purchase a 360. The best suggestion for eBay users is "buyer beware."

Then there are the two extreme measures that I will be taking. The first is to get information from the local retailers: Circuit City, Best Buy, Wal-Mart, etc. Find out how many systems will be available and which models in particular. Then check if they will be first come, first serve, or selected by lottery.

Next ask the sales rep whether or not they will force bundling on customers, and lastly, get a little aggressive and ask if retailers will hold systems for their employees for eventual sale on eBay. The store I will be staying at (which will remain nameless in case any of you have the same idea) is reported to be getting 75 Xbox 360s (how many of which type is still unknown), and they will start a line in the early evening. I will be scouting the area out as well in case anyone shows up early, but if planned out well, then my chances are looking good.

But if they aren't I have one last option: a personal contact with connections. Every system launch, this individual (who will again remain nameless) purchases multiple systems with the intent of selling them on eBay. After establishing a strong business partnership with this person, he has offered to sell me one of the extra 360s that he will get at retail price.

Hopefully after this Tuesday, I will be playing Madden or PGR3 on my new 360, and even better, I will get the call saying that Perfect Dark Zero is available for review. One step further will be that I will get my SIRIUS S50 so I can have some background music to transfer to my 360 (I received word that it should ship out next Monday"I hope.)