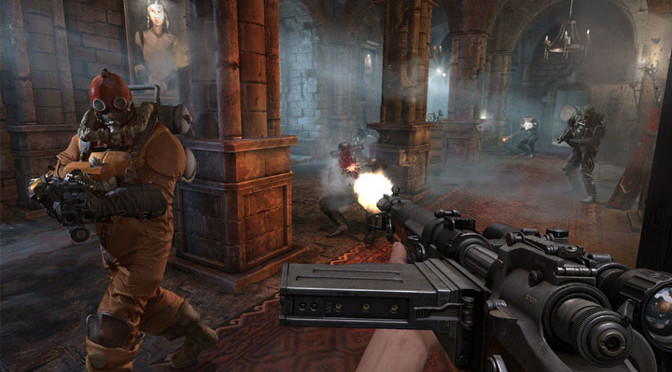 I have to admit, last year, I never saw Wolfenstein: The New Order coming. After all, the previous Wolfenstein game was rather forgettable, and I expected the same thing from Machine Games’ 2014 release. Thankfully I was wrong. What looked like another typical shooter in the Wolfenstein universe turned out to be a beautiful, enjoyable, and at times, even a funny portrayal of what the world would look like if the Nazis did win World War II. The game was so much fun it warranted multiple playthroughs from me, and even earned a spot on my Top 5 games of the year list. It was that good, and left me wanting more.

Leave it to Bethesda to grant me my wish, as one year later, a digital-only standalone follow up called Wolfenstein: The Old Blood was released. Notice that I did not refer to the game as a sequel, because it is actually a prequel to New Order. In fact it takes place before the 1946 assault on Deathshead’s fortress. In addition, Old Blood can be considered an unofficial reboot of Return to Castle Wolfenstein.

That is because once again, B.J. Blazkowicz receives orders to infiltrate the titular Castle Wolfenstein. Along with fellow OSA agent “Agent One” their target is a top secret folder from one Helga Von Schabbs. But the mission ends up being compromised, and both BJ and Agent One are captured. BJ must escape, locate Agent One, and recover the folder before the plan is put into motion.

Old Blood consists of eight levels, divided into two parts, with both of their titles sounding like those used in a Quentin Tarantino movie (a tradition that carries over from New Order.) The first part concentrates on Schabb’s lieutenant, Rudi Jager and his trusted albino German Shepherd, Greta. During this chapter we are introduced to new stealth based elements, such as deactivating power sources needed to get past or eliminate power-armored soldiers. Also, with a new detachable pipe weapon, BJ can now climb up jagged surfaces, as well as use it as a killer melee weapon.

The second part of the game takes as a whole new game of its own. In fact, it almost feels like another game that id Software is best known for. It was quite a surprise, but in the end it just made the game so much more fun to play

What I can say about the perfection though is once again how gorgeous the game is. The id Tech 5 engine shines on the Xbox One, running a near constant 60 frames per second with no sign of any detail loss. It truly feels like a next generation title, just like its full-price predecessor.

I finished Old Blood in about 8 hours on Bring ‘Em On difficulty, and even at that difficulty, the game is brutal. The AI varies between units, but standard SS soldiers are brutal in their own way. Stay hiding in a corner too long, and they will lob grenades without mercy. Not since the Call of Duty games have I seen enemies be so liberal with grenades, and damn if it doesn’t make the game more intense. I can only imagine how vicious they would be on the Death Incarnate or Uber difficulties.

But being as good as it is, I will gladly go through Old Blood again on these higher difficulties. And at $20 it makes a great value as well. Now if Bethesda treats the upcoming DOOM reboot the same way they did Wolfenstein, I will say they will end up being my favorite publisher, as if them doing Fallout and Elder Scrolls wasn’t good enough.

[amazon asin=B00VXQBE8C&text=Pick up the Old Blood code from Amazon today!]

Pros: The amazing gunplay of The New Order returns unaltered. Guns feel like they still have weight to them. AI is much more relentless this time around. Game takes on a whole new level near the end of the game. In fact if it weren’t for a slightly disappointing final boss battle, it would have achieved total shooting perfection.

Cons: Might not have as much of the humor that New Blood had. Final boss encounter might be disappointing for some players.

One thought on “Wolfenstein: The Old Blood Adds New Action”