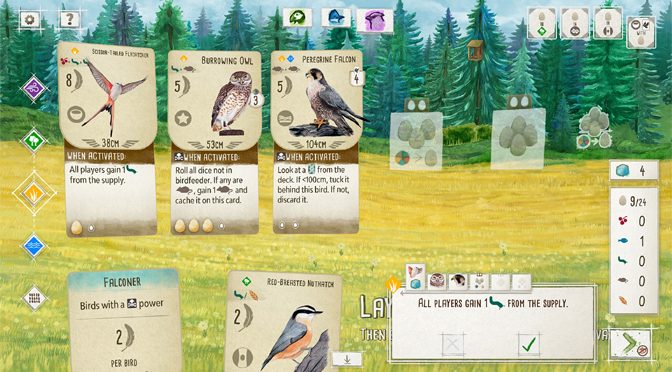 When I was younger, I spent a lot of my time playing Magic: The Gathering using both physical cards and eventually the online platform once it got developed. It was a lot of fun and the thrill of besting your opponent in a tight match is something everyone should experience. I got to do that a few times at conventions too, which is extra exciting.

So naturally I tried to share that experience with my non-gaming friends and family. And while I had limited success in doing that, for the most part the whole concept of magic, mana, strange creatures and odd cards like flying walls and plague rats kept most non-gamers far away. 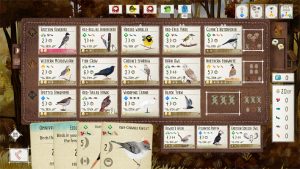 Which brings us to Wingspan. Developer Monster Couch has created a really beautiful strategy card game that centers around nurturing a series of birds, shuffling them to different habitats, finding appropriate food and ultimately getting them to lay eggs which are used for scoring. The really clever thing is that Wingspan is in a lot of ways just as complex and deep strategically as Magic, but the subject matter and the overall presentation makes it much more appealing to casual players.

It has to be said that Wingspan is not technically a casual game by most people’s definition. Despite the beautiful interface and the cute bird-themed subject, not everyone can easily pick up the game and have fun with it. The tutorial for the game is a little bit clunky, which doesn’t help, but even if the tutorial was amazing, Wingspan is still a pretty complicated game to play, much less to master. You really need to put in the work to become a good player, though I would say that for most players, that work will pay off. 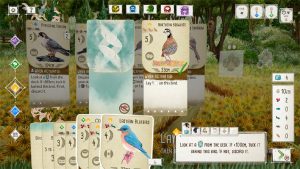 The game is strikingly beautiful between the hand-drawn backgrounds and the bird illustrations on the playing cards. This is enhanced with little animations that occur on screen to add to the ambiance. The developers even added a little winter theme for the recent holidays. Although your brain is probably going to be working overtime to plan a good strategy, the overall graphics and presentation tends to put players in a more relaxed mood, which is a good thing.

The only thing better than the graphics is the audio. Music in games is often a background thing, but in Wingspan it really compliments the overall package as well as the mood of the game. All of the tracks are original guitar-based music that fits in perfectly with the beautiful outdoor and bird-themed vibe. This is one instance where I would highly recommend buying the soundtrack to the game, which is available separately on Steam from the main title. The music makes for a relaxing background for any studious activity. 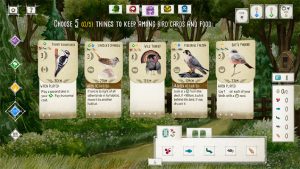 As far as the strategic meat of the game, Wingspan has got that. Just playing Wingspan alone (it supports up to five players) I was able to come up with some clever strategies to advance the lives of my collection of birds. Watching people streaming themselves playing the game helped me learn a few more. I don’t think I am quite ready for live play against other players just yet, but with a little more practice might be able to hold my own.

I could see Wingspan becoming a valid eSports or tournament play game. It’s every bit as good as some other computer card games that are out right now, and quite a bit better than most. Plus, the atmosphere and subject matter should help it to appeal to larger audiences and groups that don’t normally partake in video games, much less tournaments or competitive play. 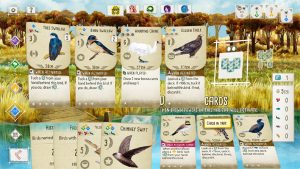 Wingspan is available on both Steam for the PC and the Nintendo Switch. If you like strategic card games at all, then you need to have this beautiful new entry in your collection.

Wingspan earns 4.5 GiN Gems of five for being a refreshing breath of fresh air in an increasingly crowded genre. Give it a try. You’ll probably have a really nice time.