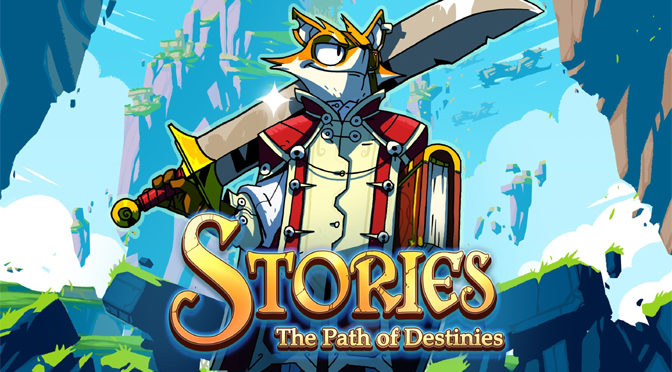 Stories: The Path of Destinies

Have you ever wondered at the end of a fairy tale what if they had done something differently where they would have ended up? Well that was the question developer Spearhead Games tries to answer in their fun but flawed game: Stories: The Path of Destinies.

At the beginning of Stories you are thrown into the shoes of Reynardo the Fox, a self-assured rogue fighting in a rebellion against an evil empire of ravens led by an maniacal toad. If that sounds bonkers to you it’s because it is. Stories’ narrative is very much a fairy tale; filled with talking animals, non-descript magical items, and more one liners than you can shake a stick at. However beneath that, Stories offers an interesting if not simple branching narrative that will have the player trying to get it right. “Get what right?” you might ask, well a lot like reading from an online cook book, you probably don’t get a happy ending your first time through. This is one of the things that makes Stories fun.

The game’s multiple paths are a huge part of what makes the game what it is. This is made clearly obvious as once you finish your first play through you are introduced to a board with a series of card slots on it. Each slot representing one of the twenty-four (technically twenty-five) paths in the game, not to mention four symbols all connected to a giant lock each symbol being referred to as a truth you must find out to get the twenty-fifth “True Hero” ending.

Generally, in each play through after every level you are given one of two choices (sometimes three) that will decide how you progress and how the story changes. Now unfortunately to get the “true hero” ending you have to have done at least four “incorrect” endings. The problem in this lies with the fact the game kind of makes you get it wrong the first few times which makes the path system feel more forced than it should. Now it took me about six hours total to reach the “true hero” ending with four previous paths completed, five counting the true ending, so each path lasts about seventy-five minutes give or take. So in total the game would take about thirty-one hours to complete all paths, once again give or take, moving leisurely through each path.

When it comes to the content on each path, of the ones I played through, I found them to be quite enjoyable and varied. Each ending makes sense and generally proves to be quite entertaining. One of Stories best pieces is its humor and writing. The game does not take itself too seriously; whether it is dropping more references (ranging from Star Wars to Dark Souls) than a weekend at Comic-Con or semi-breaking the fourth wall with its narrator’s own brand of self-aware humor. The entire game is narrated by actor Julian Casey most known for his roles in the Assassin’s Creed franchise. The entire game and its characters are voiced by Mr. Casey who does an expert job making the whole game feel much like someone reading a fairy tale to you. However, in with the game’s humor are a few serious and dark subjects, I will not get into them to avoid spoilers but the game has a few moments that carry some weight which add to the overall experience. The variation in story is a great help for the somewhat simple and repetitive levels and gameplay.

The game’s core gameplay is quite simply; mash the attack button until everything is dead, use a few tools here and there to get around. It is all quite basic even with the branching skill tree. The skill tree itself is par for the course not offering too much in the way of choice as each branch is straight and does not force any tradeoffs. Once you’ve reached the higher levels there is a certain skill you can obtain that makes the already simple combat system trivial. This does not help as enemy variety in the game isn’t all that noteworthy. You have the cannon fodder grunts, guys with shield, a suicide bomber, a support spirit, and an attack spirit. While the new archetypes create challenges early on, by your third or fourth path your skills will have almost entirely phased out the challenge from their abilities.

The real challenge in the game comes from the fact that early on you can’t take much damage so you have to be careful when it comes to getting grouped up on by enemies or dodging traps. The game’s puzzle system is simple but fun, however, after multiple play-throughs they certainly lose their shine. The game even makes fun of this fact saying that “If only games had puzzles that changed every time” which makes it even worse as it seems as if they would actually be changing the puzzles! This problem is compounded by the fact each path will have you experiencing the same levels over and over again which can become quite boring as you will only want to just get through the level because you would have experienced the level before.

The game attempts to mitigate this through special doors that require certain swords to open, however these paths often only lead to materials or gems that are not entirely required to succeed at the game. Another issue lies in the fact that with each sword you have access to in the game I never felt the urge or need to use another one other than the first sword you craft. One of the saving graces to the repetitive levels is their visual astatic.

Each level of the game is detailed and visually pleasing. Its cartoon style is fitting and all of the levels set the mood and feel different from each other. This visual style makes coming back more enjoyable as you take notice of small details in the environment. Another great part of the visuals is the story book like cut scenes each of which add to that fairy tale feel. However, at time the visuals falter somewhat. The game seems to lag after each attack in combat which is quite jarring at first, as the game seems to stop for a quarter second before resuming. Now this is likely caused by a game mechanic that slows down time with each attack however the change is so rough as to be an issue. Also it can be noticed in certain areas plots of land transition harshly from one element to another IE: dirt to grass looks like a hard cut in texture. Overall this is mostly unnoticeable amongst the flashy sprites and cartoonish style.

In the end Stories is a solid fairy tale adventure that creates quite the journey. While at times the game can be repetitive and the RPG element is lacking in depth, it is a game that at its price is more than worth it. So if you don’t mind a few short comings and are looking for a humorous and heart felt tale of déjà vu, Stories has a path for your destiny.