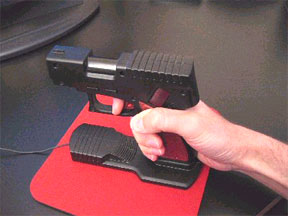 Over the course of my thirteen years of owning a PC, I have been through several different mice. I suffered through the sheer torture of using a ball-based mouse, having them act up on me because the rollers needed cleaning. Then I went on towards optical mice, and fell in love with them. Microsoft’s Intellimouse series became an instant favorite of mine, and I never thought I’d be able to use another mouse.

Still with following the Intellimosue series, other mice have come along offering their own design. Who could forget the Razer Boomslang, which despite offering a higher DPI resolution for increased accuracy, the oversized buttons made it a challenge to operate. Or how could we not miss out on those novelty mice, designed to look like footballs, hockey pucks, or even designed after Spider Man?

But who would have ever thought of a mouse designed like a semiautomatic handgun? Only monster Gecko would come up with that idea, as their new PistolMouse FPS was designed to look like that.

Based on a nine millimeter handgun design, the PistolMouse FPS is optimized with first person shooters in mind. While designed like a handgun, it truly functions as a typical garden variety mouse.

The base slides around like an optical mouse, and with a scan resolution of 800 dpi, the feel is quite responsive. The trigger functions as the left mouse button, while the second mouse button is located underneath the trigger.

While the trigger feels natural, and is quite responsive, the small frame of the secondary button will take some getting used to. While sliding the mouse is standard issue, I also noticed that by twisting the mouse on its side axis, it can be used to turn your FPS character around. It gives a true feeling of a virtual reality environment.

It will be tough, however, to turn the mouse at a 360 degree radius, but a slight sideways move will be able to remedy that.

Testing the mouse out with DOOM 3, I was able to use the secondary button for my flashlight, so I can switch between it and my gun, and after several minutes of practice, it became instant.

Above the grip is the mouse wheel, which makes it feel almost like the gun’s safety. The response on the wheel is also quick and responsive, perfect for switching weaponry.

Installation of the PistolMouse can never be any easier. All that is needed is a USB slot. There are no drivers required for installation, and once you’re plugged in, you’re ready to go.

The only complaint I can see about the PistolMouse is that it does take some getting used to. People who are accustomed to a standard mouse are able to control it precisely, and when trying the PistolMouse for the first time, I ended up moving it too much. After a short while, it became second nature, and eventually it was my mouse of choice for shooters.

MonsterGecko used a lot of imagination when coming up with this special type of mouse, and it shows in the final product. Despite a minor issue with the secondary mouse button, the PistolMouse will be a welcome addition to any shooter fan’s computer rig.