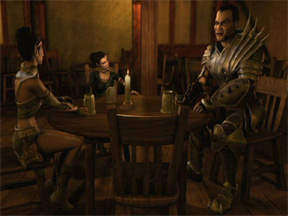 Fans of Chose Your Own Adventure books, welcome to the 21st Century. Scourge of worlds is a 90-minute chose your own adventure-type DVD. You control the characters Regdar (Dan Hay) a fighter, Mialee (Anna Deas) a mage, and Lidda (Caroline Lesley) a thief, as they try to stop Barathion (Lester Rosenthal) a good cleric who is trying to find and use the "Scourge of Worlds."

During the adventure your heroes may be added by the druid Rayne (Jack Brown), and they will most certainly be used and attacked by Araidne (Sam Cunningham) an evil cleric, as she is the evil person who has duped Barathion into getting the Scourge of Worlds for her.

If you’re a Dungeons and Dragons fan, you will probably recognize Regdar, Lidda and Mialee, as they are the example characters in the 2002 or 3.0 edition of the game system from Wizards of the Coast. I am also told that starting in 2002 the characters began to make regular appearances in a series of D&D novels by T.H. Lain.

If you read Chose Your Own Adventure books as kid, or if your children are reading them now, this movie would be a fun addition to your library. I won’t say the story is wonderfully deep. Because it is not, but then looking back, many of the books I read as a kid did not have great story lines.

SOW does have good CGI animation and the voice acting is very good. The total movie is about 90-minutes, and from play testing I have found that each run through generally lasts about 20 to 30 minutes with a choice coming up every few minutes. According to the box there are 1,100 possible story paths, and while I did not check the match, that number does seem possible to me.

How it works is that you watch the movie for a while and then the three characters will come to a decision point. It can be as easy as trying to figure out how to get a room in an inn for the night, or something potentially more deadly like figuring out if you should track down a group of orcs, or continue on the road through the dark and spooky woods.

When a decision point comes up, you have an unlimited amount of time to make your choice. It’s not like the Dragon’s Lair series where you have to quickly mash a button to avoid being sucked down a whirlpool or something like that. You are basically choosing what scene the movie chooses to show you next. It was great fun sitting around with a bunch of friends and chatting about which decision was the correct one when a choice came up.

And as a boon, you don’t need any special equipment to play. While it will work in a computer’s DVD, it really works best in a standard home DVD. You use your remote to pick choices and can do so from the comfort of your favorite couch.

One of the things that I personally liked about the movie was the fact that they turned off scene selection on the DVD, so you cannot cheat. Not all of the GiN staff agrees with me on this, but I did not the fact that when you die, you go back to the last choice screen, so you can keep trying until you find a path that succeeds.

SOW was actually released a few years ago with four possible endings. The special edition box includes two additional ending possibilities, as well as a bonus disc containing a linear version of the movie as will as some fun extras like a trivia game and some concept art as well as a behind the scenes look at how they made the movie.

With a retail price of $24.95, though you can probably get it for under $20 dollars, I think this first of its kind chose your own adventure-type movie is well worth the money.

I won’t say it is the best story ever, but I have gone through it several times, as have several of the other GiN reviewers and editorial staff, and none of us has taken the same exact path twice. And every single one of us has said how much they enjoyed the experience and wanted to try it again.

So in the end, Scourge of Worlds is not exactly a movie and not exactly a game, but a pretty fun hybrid that might just open up a new area of entertainment should this format catch on.