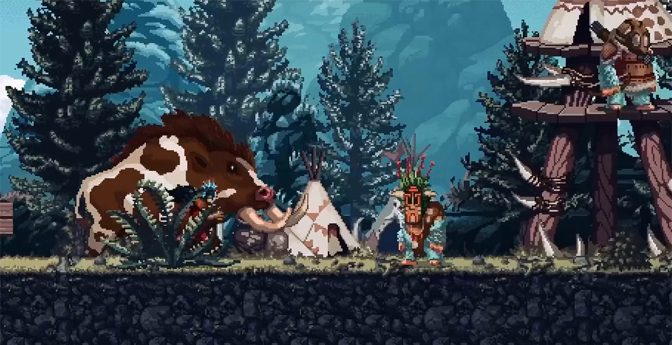 Hey all I’m back with a hack and slash RPG for the Switch. It’s Warlocks 2: God Slayers!

Plot: The plot is very sparse, the game opens with your character stuck in a cage while some baddies are eating outside near a campfire and you are set free by some mysterious sasquatch-like man because somehow they know your character wants to become a part of the Order of Warlocks, whatever that is. What follows is a broken mess of plot that ends up going pretty much nowhere, not that it started with any clear goals or even coherence. 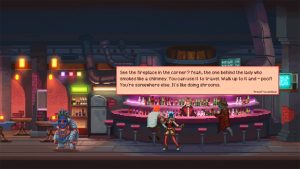 Gameplay: The gameplay is not amazing, maybe future ports for the other platforms will improve the gameplay, because it’s not that fun to play on the Nintendo Switch. While it plays a bit like a Metroidvania game, it lacks a map on the screen, and the combat is atrocious. In addition, movement is odd, and I found myself trying to explore nooks and crannies with my first character who could ride on his phoenix (which is never explained either) but being blocked by various invisible walls which is highly frustrating. 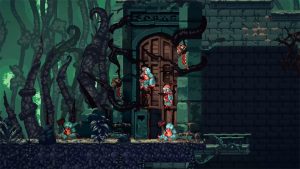 You have to aim your attacks, which sounds great except when it takes a couple seconds to move the reticle which is clunky and awkward. This could have been alleviated with the lock on feature, but that is even more of a pain in the butt to use due to its very limited range (which doesn’t outdistance you from enemy fire) and robs you of the ability to consistently hit critical weak spots to deal more damage.

The leveling system is not great. You have to progress the “story” to continue upgrading your abilities, and it’s not even a high level cap. You get past level two in the first stage after the “tutorial.” The abilities however, are not that useful, and only seem there to prolonging gameplay. 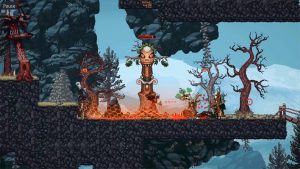 Finally, the difficulty grows much too fast even on the easiest level, and you can find yourself getting your butt kicked in the very first stage because of an infinite enemy spawning totem. That wouldn’t be a huge issue, but it’s not really possible to stock up on a ton of money to buy health restoration items early on to allow lesser skilled players to deal with the nonstop waves of enemies. 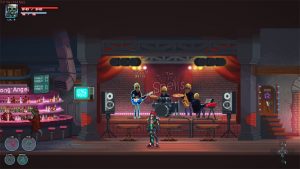 Art: The art is mediocre, normally I’m all for pixel art and I respect anyone who can do it well because of the timeless quality it gives. However this game looks like it was made for the late PlayStation 1 era of games and that’s really not acceptable these days when combined with the poor gameplay Warlocks 2 has. If it had much more smooth gameplay I’d be much more forgiving, because it’d be obvious that they put more time into making the gameplay better over the art, but that isn’t the case here.

Music: The music is boring and repetitive, and honestly I found myself growing more and more irritated by the time I finished the first stage, and it never really got any better. 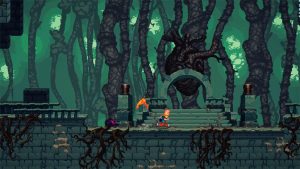 Overall: This could be a great game, and may even be loads of fun with the local co-op option, but for those solitary gamers this game is not really worth your time with its current clumsy gameplay and atrocious plot.

For those who like: Local Co-Op, Hack and Slash RPGs.

Not for those who like: Either of the above, or having polished gameplay.