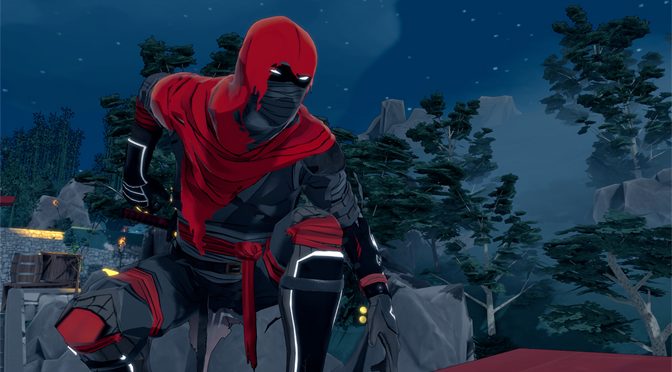 Aragami is a stealth action game in which you control a vengeful spirit who tries to carry out the will of the girl who summoned him. Players will sneak around, stab, and sometimes run away from enemies as you progress from area to area. Stealth action games are notorious for being difficult to properly balance- if utilizing stealth simply takes too long, players will get bored and go in guns blazing and either get frustrated or find the game too easy. If stealth segments don’t take long enough, then the game is over in a flash and players will see all of the content in practically no time. So is Aragami with you spending your Shadow Essence on it, or is this a game better left in the dark? Let’s find out. 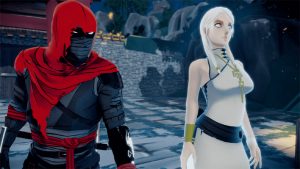 In Aragami: Shadow Edition, you play in old Japan as the titular Aragami, a vengeful murder spirit who was summoned by a girl that was kidnapped by wielders of light, which coincidentally happen to be an Aragami’s natural enemies. The story starts off pretty boring- as if it’s mostly just a set piece to give an excuse to wander through areas and backstab enemies to death, but toward the end of the game the story of Aragami and Yamiko, the girl you are supposed to rescue, actually gets pretty interesting. 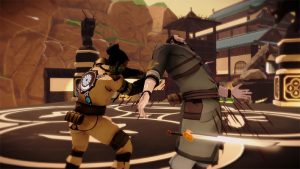 In Aragami, players will control the titular character through different locations, usually trying to open a gate or eliminate a barrier, and you can sneak behind enemies to kill them without much hassle. Sneaking from shadow to shadow with the special teleport mechanic is a great way to vault up walls, behind guards, or past obstacles as you attempt to get to the end of the level. Aragami does eliminate a lot of baggage that different stealth games in the past have- game play can be as fast or as slow as the player wants for a pretty big portion of the game due to the fact that you can teleport between shadows. Getting from point A to B, then getting stuck because you didn’t realize this copy-paste hallway was a dead end unlike the last one, is much less of an issue in Aragami due to the teleportation mechanic, among other things. 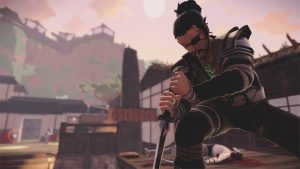 The game compounds a lot of different mechanics into an almost arcade-like experience- stabbing an unaware enemy will net you points, and taking out every single guard can yield a bonus at the end of the level, but not killing any enemies at all can yield an even larger bonus for the end of level score. You’re mostly free to play it however you like as you can get noticed, escape, and then come back through later, but you do get a bonus reward at the end of the level for never having been detected. These medals can be used to unlock different character skills for Aragami, though they’re entirely visual and do not affect how the game plays. 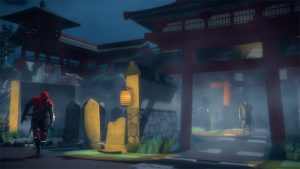 Players can find hidden skill point scrolls throughout the levels, which is where only one point of Aragami’s replayability comes into account- players can return to old levels to find these scrolls at any time. It is actually recommended to find all of them that you can, as more skills give you more flexibility in approaching different level configurations. Guards can’t become alerted to your presence if you took the skill that lets you turn stealth killed enemies into ash, as there’s no body to be found. Other techniques include the ability to throw kunai daggers or the ability to briefly turn invisible. All of the skills are useful in some manner or another, and each uses your Shadow Essence. Shadow Essence is basically the MP consumed for your teleportation and other skills, and is shown by how lit up your cape is. Being in deep shadow recharges your Essence quickly, while being near torches and other sources of bright light can render you completely unable to use your special abilities. Some abilities may only recharge by doing normal Stealth Kills on targets or by finding shrines located across the map- the kunai come to mind for an example of the latter. 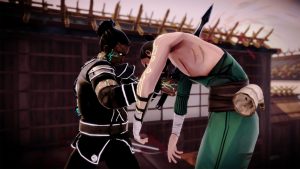 There is little combat to speak of in Aragami, mostly because it can be completely avoided and, if discovered, the enemies will kill you in one hit. Even the most common palace guard in Aragami: Shadow Edition can shoot waves of light off their sword like they’re Link using the Master Sword at full health, and those sword lasers kill you instantly. It just seems directly easier to avoid being placed in that situation entirely and only kill hostiles when you know you won’t alert guards or be discovered. Finding multiple enemies is basically a death sentence, as fighting your way out of multiple opposing laser swords that kill in one hit is something even the protagonist from Dishonored couldn’t do. If noticed by a single guard, a kunai to the face is the answer to that problem.

As established above, stealth games typically have a hard time balancing difficulty to time spent- as in, forcing the player to wait versus giving the player gratification for the actions taken, but another concept that’s difficult to balance in stealth games would be repetitive actions. The above should start to clue you in on some of the disadvantages of Aragami as you progress through the game- small areas with multiple enemies are fine, and the terrific level design lets you tackle obstacles in different orders and ways, but every challenge in the game can be completed without any skills at all. This means that skills utilizing your traps, kunai, or disappearing the bodies of enemies you stealth kill are beneficial but turn a lot of the mid to late game challenges into you doing a lot of the same thing over and again in different areas. The limited enemy variety and, “Disable a barrier of light” objectives hurt a game that starts out very strong, but these kinds of issues are really common to the genre so Aragami is simply no different. 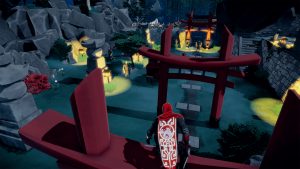 That’s not to say there isn’t a story worth checking out, or that there aren’t boss fights worth playing. Yes, Aragami is a stealth game with boss fights, and the fights themselves are actually quite interesting and a great change of pace- three bosses exist in the game, overall. The final boss was actually quite an interesting challenge and likely the most interesting thing in the game- because while the story of Aragami is a little bit light or empty, the final chapter is more interesting than you’d initially think when you start up the game. 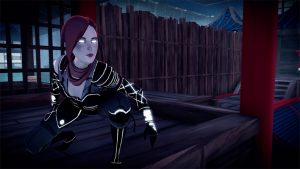 There’s also online co-op available so two players can go through the game at once (sorry couch co-op lovers, no local co-op play is available). The game should run players around six to 10 hours depending on how many skill scrolls you keep missing or, if playing with friends, how often they keep getting themselves killed. There is also the Nightfall campaign included that features two different characters with new abilities, which should be played after you complete the game’s main campaign. 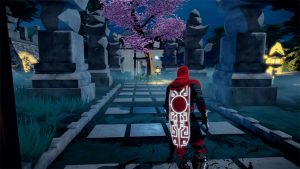 The graphics of Aragami are… okay. The cel-shaded characters all look great but the environments can leave a bit to be desired. The use of lighting and shadows are important given the game’s nature, so players shouldn’t have any difficulty telling what is a safe location from one that is not. The music is pretty decent all the way through- it’s not bad, but just serviceable enough. There are no tracks you’ll really find yourself humming out of the game, but it all works for the in-game ambiance so it’s good enough. 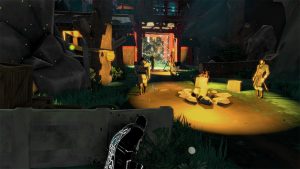 Overall, Aragami is a very competent stealth action game, replete with arcade elements and hidden scrolls in levels for replayability. A lot of challenges toward the end of the game are quite repetitive but the bosses do help break up the monotony. The lack of replayability in a fairly short game brings it down a bit, but not a lot of stealth games actually have decent replayability anyway. If you’re looking for a solid stealth-action game because you’re craving one, you can’t go wrong with Aragami because it does just enough different from the norm that it’s worth a play. If you don’t enjoy stealth games, or only like stealth games that leave you with viable combat options like Dishonored or Mark of the Ninja, or requires more inventive puzzle solving like Hitman: Blood Money, then Aragami may not be your cup of tea as its arcade-like elements may not be enough to invite in those who are not fans of the genre.