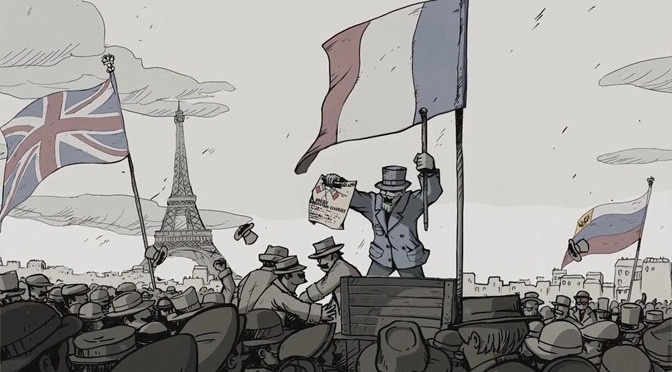 I had no expectations of Valiant Hearts: The Great War. I knew it was a war game based during World War I and that it was done in a cartoon style, but that’s all I knew when I downloaded the game from PSN onto my PS4. Since it was a war game, I expected to be shooting things. I couldn’t have been more wrong.

I can’t recall a war game in over a decade that wasn’t a first person shooter. Valiant Hearts is a side-scrolling 2D puzzle adventure that blew me away from the opening scene. I want to start by saying that there is a lot of history in this game, and yet it is doled out in such small tidbits here and there that you’re absorbing it without really noticing. There are historical artifacts to be found that you can read about, or not, and there are letters that you can find. You can read those, or not. My suggestion is to read them. The letters in particular are quite poignant because they are real letters from real soldiers and civilians who lived during World War I.

Actually, read everything in this game. Read everything because World War I is a largely forgotten war, overshadowed in history classes everywhere by World War II with its easily understood, clear villainy.

World War I, by comparison, is much murkier. It was a war of inches, a war of muddy trenches, a war of poison gas. In short, it was an endless, wretched grind punctuated by moments of abject terror and a truly horrendous number of casualties. It’s not the kind of war that gets made into movies and video games. Except Ubisoft did make a video game about World War I and it’s perfect.

Somehow this little 2D side scrolling game perfectly captures the futility, the longing, the terror, and the small heroics of individuals living in a time of chaotic insanity beyond their control.

The game has four primary characters. Emile is a Frenchman drafted into the army. Karl is Emile’s son-in-law and also a German citizen. He is forced to leave France and his wife and child and return to Germany where he is drafted into the army. Freddie is an American volunteer who joins the French military after his wife was killed in a German bombing. Anna is a Belgian veterinary student who was studying in Paris before joining the ambulance core. There is also a rescue dog that travels with several of the characters and helps them.

Game play consists of challenging, but not impossibly so, puzzles primarily designed to escape prisoner of war camps, rescue civilians, or take out the primary villain of the game, Baron Von Dorf. It is Von Dorf who connects the other characters and ultimately brings them together. The game takes you to all the major battle sites of the war.

The time frame is from 1914 when Archduke Franz Ferdinand is assassinated until 1917 when the United States enters the war. Any history buff will tell you, those were three brutal years. You care about these characters from the first moments of the game and you continue to care as you play. I won’t spoil you for the end, but prepare yourself: war is hell.

This is the best game I’ve played in years. It’s got the most in-depth storytelling I’ve seen in a game in a long time. It’s the kind of game you dream about after you stop playing, because your subconscious still has so much to process. Given my job, a lot of people ask me what I recommend as a great game. Valiant Hearts: The Great War is now on the top of my list. Go download it.

Valiant Hearts earns a perfect 5 out of 5 GiN Gems.

One thought on “Valiant Hearts Is A Perfect Wartime Adventure”