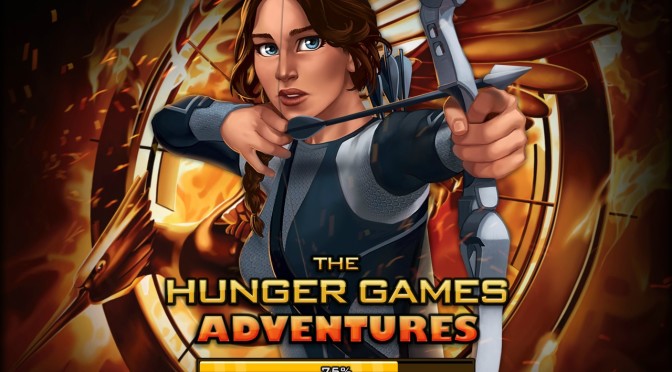 The Hunger Games novels suggest so many good games — a minigame hunting prey with Katniss’ arrows (a popular choice for the middle-school girls in my game design classes), a crafting and survival game like Lost In Blue set in the forest outside District 12, a combat game in the Arena, or even a social RPG, like Whitewolf’s Vampire: The Masquerade, set in the Capital — that I had high hopes for The Hunger Games Adventures.

Even when I realized this game had some appointment-style mechanics, I still thought that could work well. Maybe I’ll set snares and traps in the woods, with Gale and Katniss, and come back when I’ve caught something! Maybe I’ll have to perform actions at certain times, like sneaking through the fence when the electricity is off!

Instead, The Hunger Games Adventures is an appointment-style builder with thin missions, where pretty much every action involves spending one point of energy to tap an item, waiting for the yellow meter to fill up, and completing the action so you can spend another energy to tap the next item. It’s not a unique mechanic by any means, although this particular game is on Facebook, iOs and Android, click-and-wait is the basis of way too many Facebook games. I’ve written before about monetizing on freemium games by designing to bore players and it’s particularly disappointing in a game set in a world that really invites creative gameplay.

The game’s art, although clearly inspired by the movies, is awkward and mismatched. The characters have the proportions of Bratz dolls, with more realistic faces, not quite photos but definitely resembling the movie actors, while bodies are awkwardly cartoony. Arms, legs, and torso don’t quite match up, creating gaps and overlaps at the joints for all characters. (Since the game is a movie spinoff, Katniss is the Jennifer Lawrence version, not the olive-skinned Seam resident from the books.)

One of the introductory missions asked the player to plant flowers at the home base, a pretty standard social game task, although a terrible mismatch for Katniss’ character. In the novels, Katniss complains about the uselessness of candy, iced flowers, rainbows and hair ribbons, so marigolds before food is a pretty unlikely choice. Also, one of the tokens for premium currency are multiples of the little mockingjay pin Katniss wears in the arena… the precious, unique pin she wears as a symbol of her district… I am pretty sure my middle schoolers understand the themes in these novels better than that.

I spend a lot of time around middle school kids, who are all pretty crazy about the Hunger Games. More than one student has shouted I VOLUNTEER AS TRIBUTE! in response to their name at attendance, and I use student name Katniss E as the example for the lesson on file naming conventions. (I do not tell them that working in game development makes me emphatize with Seneca Crane.) This is particularly good with the middle schoolers, since the younger students are crazy about some Frozen thingy which has something to do with asking each other to build snowmen. I discuss the Hunger Games frequently, with dedicated fans in the target demographic, is where I’m going with this.

As I played the game, tapping to fill yellow meters that representing burning bread in the bakery’s oven, shooting wild turkeys with Gale, or helping Prim heal injuries, I would receive popups telling me that Haymitch had found a sponsor for me, which translated to watching an advert in exchange for free tokens. This isn’t a unique system, and I’ll admit to watching a few adverts for coins on The Sims Social. But here, clicking to wait for an advert to play to give me points just highlighted that I was waiting through an ad video in order to spend those points clicking and waiting for another meter to fill up.

These popups were push notifications, occurring randomly when I was trying to doing something else (usually completing a mission or traveling to a new location. Getting harassed to watch ads, or click a second popup, confirming that I really didn’t want to watch an advert for tokens, combined with a gameplay that mostly involved watching meters fill up became frustrating very quickly.

By pretty much any standard, The Hunger Games Adventures is not a good game. It’s a click-and-wait mechanic, plus clunky art, supersaturated with click-and-wait adverts. And yet, I kept playing, because I wanted to pretend to be surviving in District 12. After several days of gameplay, I can definitively say that you’re probably better off running around the back lot shooting imaginary squirrels with a pretend bow, or just rereading the books already.