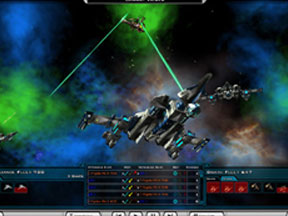 If you think you are a pretty good strategist on land, then you might want to try your luck in space. Galactic Civilizations II is probably the most complex empire-building simulation you will ever play. Not only will you control every aspect of your chosen civilization on your home planet, but also your people’s destiny on multiple worlds – if you are lucky enough to plant your flag there before anyone else or have the military might to take it from someone else.

You start off as one of ten civilizations, including humans, as you are just beginning to explore space. If you don’t like the default civilizations, you can even create your own. You need to construct colony ships and scouts, and send them off to find planets that can be settled.

Each civilization has unique character traits that help or hinder it in different situations. There is a huge mathematical backend running in the game that figures everything out, though you won’t have to bother with it unless you really want to. Anyway, the point is that you can customize your race to be anything from a war-like empire to a more diplomatic bastion to technological wizards.

Planets are rated based on how many build spaces they have on them, and some are airless wastelands that can’t be touched. For example, a Class 14 planet will have fourteen places that you can put things, which makes it a really good paradise world. A Class 4 planet could barely support its population, and might be suffering from a lack of water or intense cold. It’s probably better off bypassed until later in the game when most of the good worlds are claimed. Depending on how you build out your planet, your empire will grow in different ways. For example, if you put in a research lab, then technology developments in your empire should begin to come in a bit quicker.

But of course it is a lot more complicated than that. For starters, you have limited resources, just like in real life. You only have so many people, which limits how many colonists you can put onto your ships. Although you can make farms and grow food to increase your population, it won’t happen overnight. First the resource needs to be constructed, then nature has to take its course before your population can grow. Your primary source of income is taxes, so lower population empires will have less money as well. The trick is to populate as many planets as you realistically can without overrunning your budgets in the buildup stage. This is harder than it sounds. I often overextended myself in the early game, and could not maintain my conquests later on. So strike a balance, with a little bit of an edge to pushing your people out into the galaxy.

When you conquer or found a planet, your influence will grow, which is represented by a little colored line that rings your region of space. You can colonize planets outside your zone of influence, but they may be in danger of going over to an opponent’s side in time, as their constant influx of culture begins to sway them. You can fortify your planets with things like entertainment networks, which keeps your colonists happy playing computer games and watching TV and generally not thinking about rebelling against your empire, which works to a point.

All the while you are expanding your empire physically, you also need to be expanding it technologically. There is a huge tech tree where you can research everything from diplomatic technologies like universal translators (the baseline object needed for relations with other civilizations) to weapons of war like lasers and mass drivers. My biggest complaint about the game is that the tech tree is difficult to use. Say you invent a new missile technology; there is no guarantee that you can start putting it onto your ships. Instead you have to perhaps research better computers, or bigger ships or something else.

Finding that something else can be a chore. I have seen other games, like Civilization, where the technology you get shows you exactly what you can do with it on the tech tree. Gunpowder gets you musket troops for example. And you can select that targeted technology and research is automatically assigned so that you can get there using the shortest number of hops. With Galactic Civilizations II, you might research a technology and then not be able to use it for a long time, because some piece is missing somewhere down another chain. It’s just a lot more complicated than it should be, especially considering that you are managing absolutely everything else about your empire.

If you manage to peacefully get a little empire going, eventually you are going to run into your neighbors. One of the great things about Galactic Civilizations II is that in addition to the standard "win by killing everyone else" plan, you can also achieve victory by economic might, cultural expansion and even because you have the best technology. So, depending on your plans, you can interact with other civilizations differently. Perhaps you want to bully them around, or keep them at bay, or ally with them.

Space combat occurs as part of the turn-based interface. There is a complex model that pits your weapons against the enemy’s shields. If you have lasers for example and an enemy has shields, then they are probably going to block a lot of your damage since this is a direct counter. But if they have armor, which instead counters mass drivers, they are still going to block some damage, just not as much. You fire and then they fire until one fleet is wiped out. Once you know the numbers, you can pretty much figure the odds on every battle.

When conquering a planet, it is a little bit different. When you are in orbit with your troops, you can pursue several options depending on what you have researched on the tech tree. Perhaps you want to drop leaflets to convince some of the enemy to come to your side. Or perhaps you want to use your tidal generators to make a huge tsunami to wipe out some of their strong points. Some of the things you can do are extremely nasty. The problem with the heavy handed stuff is that it can ruin the planet. So a nice Class 14 paradise might turn into a so-so Class 9 world by the time you stop dropping meteors from space across its surface.

You also control the morality of your people, which is something I have not seen before. When you colonize a planet, situations will arise and depending on what you do, your society will be known as good, neutral or evil. For example one that comes up all the time for me is that when we land there is a civil war going on between two sentient bug races. The bugs are far less technologically advanced than us. The good player will try to negotiate a peace between the warring tribes, at a cost of several build spots. The neutral player will let the bugs fight it out and stay out of their way. And the evil society will simply wipe the bugs out, claim the entire planet for their own and never think twice about the poor dead insects. Each moral level has good and bad points, and other races will treat you differently depending on your current stance and theirs.

The sounds in the game are nothing special. The music is mostly background noise that neither stands out nor is really bad. It’s just average.

Graphically, Galactic Civilizations II looks really good. The game has been optimized to run in any graphics mode on any system and even the icon control buttons are able to expand based on the screen size. I played on a normal 21-inch LCD and a 54-inch plasma and the game looked great both ways. The way it is designed, it should look good 10 years from now as well without being dated. That said, the graphics are fairly set-piece in nature, like a board game. They look good, but don’t expect to be blown away.

Oh yea, I forgot about the Dread Lords, which is the sub-title of the game. That is because mostly I suspect the people that will play this title and fall in love with it will play in the open mode where anything goes. The Dread Lords come up in the story based campaign, which is a series of missions where you have set goals like conquer a planet. The Dread Lords are an incredibly powerful race that has been a sleep for a long time and are starting to cause trouble again. They are huge. One Dread Lord can almost single-handedly wipe out an army. To fight them you will need powerful fleets, good tech, and some allies you can trust wouldn’t hurt.

The tools to create games and ships are available and there is a huge collection of mods already out there for download. One of my favorite turns all my ships into the Centauri from Babylon 5. There are also downloadable missions created by the fans.

Galactic Civilizations II is a good game for people who like strategy. The game is far more strategic than tactical however, so those looking for intense action may get too bored to really tackle the high learning curve. If you like deep strategy titles though, prepare yourself to get lost in the universe of your own creating.