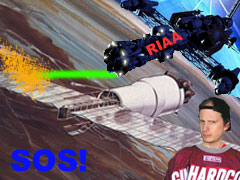 I will actually be breaking from the norm this week. Originally I planned to write about the 2006 FIFA World Cup, and how I still believe Germany will beat Brazil in the finals. I was even going to get into how bad the USA team is after getting another early exit today in the aftermath of a 2-1 loss to Ghana, or how one of the USA's goals was a gift from Italy as an own goal.

But sadly, that is not the case after something I read this morning. In the past, I've been a harsh critic of XM Satellite Radio because of some of their practices, and in particular, two of their on air talent. The criticisms, and the ensuing backlash, became so bad that I decided to back out of covering satellite radio for GiN for a while. But after reading an entry on Orbitcast (a weblog site that covers all things satellite radio,) I couldn't keep my mouth shut any more.

XM is under attack, but this time it is not from their competition SIRIUS, but rather from one of the biggest enemies in terms of technology: the Recording Industry Association of America (RIAA.) Now in the past, I have followed the actions of the RIAA. They, as well as similar organizations (BMI, ASCAP, MPAA) have done their best to attack new technology in order to "protect" their investments. Cassette tapes, VCRs, MP3 players, the original Napster, and the like have all been under attack by these groups, and now satellite radio appears to be the next target.

Earlier in the year, the RIAA went after SIRIUS because of their S50 portable radio. Because it played back up to 50 hours of prerecorded SIRIUS programming, listeners can now save their stations and listen whenever they want. It became a valuable asset to me as I could be able to listen to both Howard Stern and Bubba the Love Sponge while at work. But of course, the RIAA comes in and cries foul, claiming that it creates a route for illegal music sharing. Of course, SIRIUS thought ahead, and made it so that recordings made on the S50 can NOT be transferred to PC. Still that was not enough for the RIAA, and eventually SIRIUS had to make a settlement to pay royalties for every S50 unit sold.

In XM's case, it's much worse. Two of their recent units, the Pioneer Inno and the Samsung Helix, can store up to 50 hours of XM content as well as provide live broadcasts while on the go. To a lesser extent, XM also has the Nexus, which works more like the S50 in both a 25 and 50 hour version. Of course, the RIAA is now going after XM, seeking $150,000 in damages for each song recorded.

The RIAA claims that "not only are we fans of satellite radio, we consider ourselves partners and we celebrate the industry's growth." In that case, why must you sue them over equipment that complies with the Audio Home Recording Act (AHRA,) that legalizes copying music onto tape for personal use?

Even worse, why must you (the RIAA) cry to Congress. Now because of you, we are faced with a new form of legislation called the PERFORM Act. Not getting into details, it is being done as a means to make units like the Inno and Helix illegal. But if you look at it in a broader scale, should PERFORM go into law, it will not only affect satellite radio, it will create a chilling effect. Internet broadcasting, DVD burners, and even TiVo and OnDemand cable will come under attack.

Needless to say, the PERFORM act is a major concern, and whether you might follow XM, SIRIUS, or not follow satellite radio at all, it's important to get involved. On XM's website, there is a section called "Defending the XM Nation" which explains the whole scenario regarding PERFORM and the Inno/Helix. They have even made it easy to write to your Senators and spread the word to others willing to stand up against the RIAA and their strongarm tactics.

Advocacy websites such as the Electronic Frontier Foundation (EFF) and Consumer Electronics Association (CEA) also provide valuable insights on the whole XM vs. RIAA lawsuit, and for anyone interested, they are must reads. In addition, blogs such as Orbitcast and the Satellite Standard Group provide information about the PERFORM act and any upcoming news over the matter.

I do commend XM on their stand. Say what I will about their actions in the past (commercials on some of their music channels, cutting off the NASCAR In-Car channel, allowing their once exclusive talent to broadcast on old fashioned radio,) but this alone might make up for all of that. With that, write your congressman, voice your opinion, back up XM.

Heck, go out and buy the Inno and Helix. Take a stand against the RIAA.
As a matter of fact, as a sign of protest against the RIAA, I might end up purchasing an Inno or Helix myself.